Guards at county jails in Michigan would be covered by a binding arbitration process similar to that used in labor disputes involving police officers and firefighters under legislation passed by the Michigan House on June 26, 2008.

House Bill 6112 stipulates that when negotiations between a county government and union representing county jail guards reaches an impasse, either party may call for the creation of an arbitration panel made up of one county representative, one union representative and a neutral chairman selected from a list provided by the Michigan Employment Relations Commission. The basic procedures and criteria are essentially the same as those already established for police officers and firefighters under Public Act 312 of 1969.

The arbitration process created by HB 6112 is different from the existing process for police and firefighters in one important respect. Under HB 6112 the process is all or nothing; the panel is presented with final offers of settlement by the county and the union, and must choose one or the other. This differs from the existing process of PA 312, which allows the arbitration panel to divide the dispute into separate issues and choose between the union and the municipality's offers on each issue or substitute its own proposals on non-economic matters.

Prior to passing the bill, the House rejected several amendments. One proposed to tie-bar HB 6112 to another bill that would change the process for all arbitration hearings, allowing arbitrators to create their own proposals rather than choose between the offers set before them by unions and local governments. Another would have adjusted the criteria to be used by arbitrators, such as expecting them to look at a longer time frame, consider the county's unfunded liabilities and stipulate that they could not base a decision on the county's ability to raise taxes or shift resources from other departments.

Needing 56 votes to pass the House of Representatives, HB 6112 received a majority when 54 Democrats were joined by 24 Republicans voting for final passage of the bill. Apposing the bill were 27 Republicans and two Democrats. The MichiganVotes.org vote tally is at right. The contact information for members of the House of Representatives is on page 11.

As of this writing, HB 6112 is still pending before the state Senate's Committee on Government Operations and Reform. 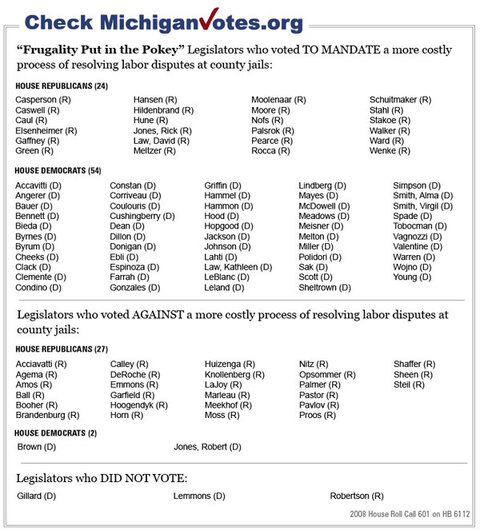 Paul Kersey is the Mackinac Center for Public Policy's director of
labor policy.
For additional information and an opportunity to comment on this issue, please see www.mackinac.org/9795.