An individual property owner's right to the groundwater underneath his or her land would have been significantly curtailed under a proposed amendment that was narrowly defeated by the Michigan Senate on May 15, 2008. MichiganVotes.org describes the impact of the amendment as establishing...

"...that groundwater is a 'public trust' in the same fashion as surface water (streams and lakes). This would in effect repeal the riparian water use doctrine of Michigan law, which establishes that a property owner has a property right to the use of groundwater drawn from beneath his or her land, as long as this does not interfere with another person's use of groundwater. Instead, property owners would not have an ownership right, but could use groundwater only if the state grants permission."

According to a press statement put out by the author of the amendment, Sen. Liz Brater, D-Ann Arbor, its purpose is to apply "the same public trust" to groundwater and create a new standard whereby "all Michigan water truly belongs to the people."

Such an extension of the public trust doctrine would amount to a massive government confiscation of private property, according to Russ Harding, former director of the Michigan Department of Environmental Quality and now the director of the Mackinac Center's Property Rights Network.

The comparison is apt because of a 1980s court case over an attempt by Michigan government to limit oil drilling in a sand dune. The court found that the state's action amounted to a taking of private property and the end result was a settlement that cost Michigan taxpayers $94 million.

"The precise value of all the water in Michigan is unknown but clearly would exceed what the state could afford," observes Harding. "Declaring a public trust over all the state's water could result in the largest private property takings in state history. In many cases, landowners would need to secure permission from government before using water that formerly belonged to them."

The Michigan Chamber of Commerce opposed the Brater proposal, asserting that it was an example of "overregulation" that would "turn ownership of water over to the government."

Sen. Brater proposed to affix this amendment to Senate Bill 860, one of many bills in a package of legislation designed to alter the state's overall water withdrawal policy. Support for the amendment was just one vote shy of the 20 needed for passage after two Republican senators crossed party lines and voted with all 17 Democrats in favor of it.

The MichiganVotes.org vote tally for the Brater amendment is below. ind the contact information for the senators at www.mackinac.org/9313 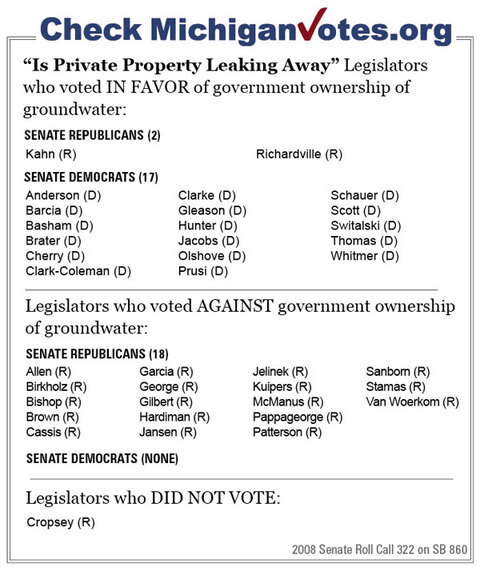 For additional information and an opportunity to comment on this issue, please see www.mackinac.org/9795.