On March 4, 2009, the Michigan House of Representatives voted to approve House Resolution 10, a non-binding opinion of the chamber that asks "the United States Congress to enact the Employee Free Choice Act, which would authorize the National Labor Relations Board to certify a union as the bargaining representative when a majority of employees voluntarily sign authorizations designating that union to represent them; provide for first contract mediation and arbitration; and establish meaningful penalties for violations of a worker's freedom to choose a union." One Republican lawmaker joined 66 Democrats in favor of this resolution while 40 lawmakers — all Republicans — voted against it.

By contrast, the state Senate had already passed its own resolution opposed to EFCA in February, noting that secret ballot elections are "at the heart of our Michigan democratic tradition," and further protesting EFCA's binding arbitration process that "would remove any incentive for the employer or the union to adopt realistic bargaining positions." SR 16 passed on a straight party-line basis, with one Democrat and one Republican not voting.

The Employee Free Choice Act would effectively remove secret-ballot elections as a means of establishing a union in a workplace. Instead, a union would be established when it could secure signatures from a majority of workers, a process known as card-check.

Last November, EFCA's passage was widely considered inevitable as part of the incoming Obama administration's early legislative push. But then the heavily unionized automotive industry in Detroit reached a critical point, requiring a federal government bailout to avoid bankruptcy. At the same time, UAW leaders balked at further concessions, providing a very public example of union stubbornness and irresponsibility. Not surprisingly, opposition to EFCA grew, and the bill's progress through Congress was delayed. On March 24, Sen. Arlen Specter, R-PA, announced that he was withdrawing his support from EFCA, making passage of the bill much less likely. Union supporters have indicated that they will continue to push for passage. Undecided senators may also be persuaded to support compromise legislation intended to make organizing easier for union officials.

As the legislative debate over EFCA continues, the stakes for Michigan are high for two reasons. First, any legislation likely to pass would probably lead to the establishment of unions in workplaces where union support is weak. Weaker union support in the workplace means more union opponents who — given the choice — would probably opt out of joining the union and paying union dues, an option that is available in states with right-to-work laws but not in Michigan. For unions, there will be a strong incentive to focus on states like Michigan where they can be assured of receiving dues from all workers, even if support in the workplace is weak.

Second, because the card-check process is vulnerable to abuse, unions will be tempted to resort to intimidation to secure signed authorization cards. Intimidation is both easier to engage in and more tempting when one has the advantage of numbers. Intimidation tactics are also harder to resist when one cannot be sure that the powers that be will protect you. Michigan, with its sizeable number of labor officials and politically entrenched unions, is prime territory for rough recruiting methods. Many of the compromise proposals that have been made in Washington may also be vulnerable to abuse in ways similar to the original card-check bill.

Some commentators have suggested that EFCA would help Michigan by promoting unions in parts of the country where they are weak, evening the playing field for Michigan employers. But the exact opposite is more likely — that EFCA would strengthen unions in Michigan. Either way, those who hold to this theory are making a not-so-well hidden admission that unions are a drag on the state's economy. Michigan voters should not count on the rest of the country to "help" Michigan by repeating our mistakes.

Michigan would be far better off dealing with its own problems. Rather than expecting workers in other states to shoulder our self-imposed burdens, we should work to establish a healthy balance in labor relations, one in which unions are lean, accountable and focused on their members. Passing a right-to-work law would put Michigan in the company of states that have been adding jobs for decades and make unions accountable to the men and women they represent. Just as important, it would represent Michigan residents taking charge of the policies that are key to revitalizing our state.

The Michiganvotes.org vote tally for House Resolution 10 is located below. The contact information for all lawmakers may be found here. 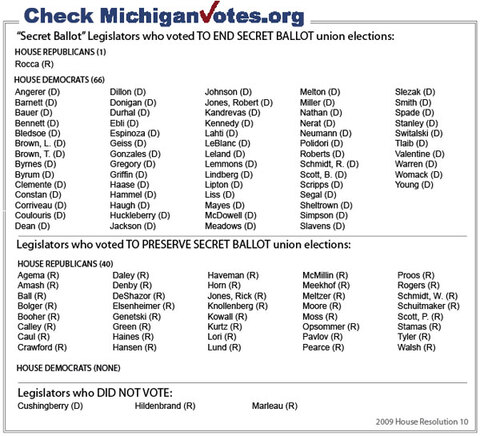 Paul Kersey is director of labor policy at the Mackinac Center for Public Policy. This article is adapted from a similar commentary published on March 9. For additional information and an opportunity to comment on this issue, please see www.mackinac.org/10424.