As Michigan's economy plummets toward a full decade of job losses, the rhetoric in the state capitol would lead you to think that Lansing's partisan combatants profoundly disagree regarding the answer to this question. But they don't. The dirty little secret is that Gov. Jennifer Granholm and nearly every state lawmaker believe the answer to be "YES!"

Where they don't agree is over what kind of businesses are worthy of tax relief. Some believe that government should provide broad-based tax relief - a fair field with no favors that fosters an environment in which everyone can prosper. But on the other side, the governor and a large bipartisan majority of state lawmakers believe that they are clever enough to act as central planners who know which companies and industries will be most successful and thus most deserving of special tax favoritism. This second approach is the driving force behind most of Michigan's current economic policy.

Exhibit A is the Michigan Business Tax. During the summer of 2006, a voter-initiated law was approved by the Legislature that repealed the state's dreaded Single Business Tax and directed the politicians to create a new tax that was "less costly to employers" and "more equitable." As a replacement, the governor and the Legislature created the MBT, which slashed taxes by 97 percent on domestic automakers.

But this new tax was just as expensive overall as its predecessor and less equitable. It "makes up" for the tax cuts on car companies by raising the tax rate on many other Michigan businesses. This tax prejudice has since been compounded by the addition of a 22 percent surcharge to the MBT, costing Michigan's job providers in excess of $600 million more per year.

The premise underlying the new MBT is that tax relief is vitally important to prosperity, but only if a business model — such as that of the domestic auto industry — wins the economic stamp of approval from the governor and a majority of the Lansing political class. And the Detroit Three are not alone: Within months of the MBT's creation, bills were passed by the Legislature and signed into law by the governor that provide significant relief or tax credits to hybrid vehicle makers, ethanol gas stations, the North American International Auto Show, companies that rehabilitate historic buildings, and much more.

In some cases these were "refundable" credits, meaning that the state treasury will send a check for the difference to the politically correct company if the special credit offered exceeds the actual tax liability. This is effectively a subsidy that is paid for by the politically out-of-favor job providers who must still pay all of the MBT and its 22 percent surcharge.

Probably the most famous of the politically correct industries being granted refundable credits against the MBT is the business of fame itself: Hollywood. A package of bills signed by the governor on April 7, 2008, creates a 40 percent refundable tax credit for film production that takes place in Michigan (this also allows an additional 2 percent credit for work that takes place in "core communities.")

"We're going to grow this industry and in the process, grow our economy and create jobs," remarked Gov. Granholm as she signed the bills to provide the special tax breaks.

Last year, film production companies used this provision to escape tax liabilities and acquire subsidies totaling $48 million. In future years, the tax rebate for filmmakers is projected to climb to more than $200 million — fully one-third of the additional taxes being imposed on other Michigan businesses by the MBT's surcharge. In exchange for the first $48 million in lost tax revenue, a Michigan State University review of the film incentive program estimates that the film crews brought in economic activity of just $65.4 million to Michigan in the form of wages, lodging, meals and more.

This is $1.36 in economic activity for every dollar of taxes that went unpaid by movie producers in 2008. In 2007, the year before these film tax credits were in place, Michigan taxpayers forked over $26 billion in taxes and fees from all sources to state government while producing $338.6 billion of economic activity — $13.02 worth of prosperity for every dollar of tax revenue that was paid.

How much wealth creation did not take place because Lansing politicians thought special tax breaks for industries like film production was a better economic policy than broad-based tax relief to everyone? Just one entrepreneurial family in Oakland County shows the other side of state government's tax prejudice.

Jerry Grubb owns the Wee Discover preschool in Waterford Township. He doesn't make movies or cars or provide any of the other politically correct goods and services favored by Michigan's political class, he just employs people to take care of little kids. For 2008, the new MBT and its surcharge will jack up taxes on his business by an estimated 334 percent. Likewise, his brother Bill owns Star EMS, an ambulance service in Pontiac. Bill's MBT liability for 2008 will jump from $71,000 to $115,000.
(A video profiling the Grubbs may be viewed at www.mackinac.org/10439.)

What improvements or expansions or new hiring is not taking place at these established and loyal Michigan businesses — and many others like them — because they must now pay many tens of thousands each year in additional business taxes?

Meanwhile, for 2009 Lansing politicians have been busy creating more refundable tax credits allowing additional politically correct companies and industries to escape from the onerous MBT and its hefty 22 percent surcharge.

On May 12, Gov. Granholm signed into law 2009 Senate Bill 466. According to MichiganVotes.org, this will "authorize a $100 million refundable Michigan Business Tax credit and other subsidies" for a subsidiary of a Korean battery company for a plant in Michigan. A refundable tax credit that could sometimes become an outright subsidy just like the movie tax exception, MichiganVotes.org also notes that this provision is an expansion of an existing batch of "subsidies" granted to other companies.

One month earlier, the governor signed 2009 House Bill 4515. MichiganVotes.org says this one expands "from one to three the number of refundable, $100 million, capital investment Michigan Business Tax credit agreements that could be entered into with makers of plug-in traction battery packs used in electric cars." This too, is an expansion of an existing special tax favor.

Only a handful of lawmakers opposed the creation of these refundable tax credits, thus signaling that only a small minority in Lansing opposes the subsidizing of one business by another. The MichiganVotes.org roll call votes for SB 466, HB 4515, and the film tax credit are below.

On Jan. 14, 2009, the Michigan Senate approved a bill to repeal the 22 percent surcharge on the MBT and sent it to the House of Representatives. This bill and four others like it introduced by members of the House have not been brought up for a vote in that chamber. 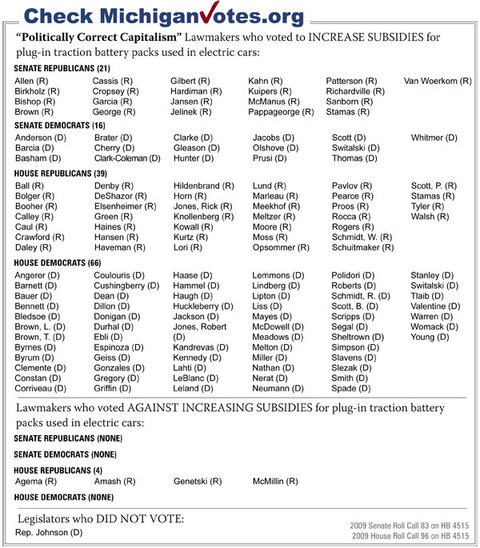 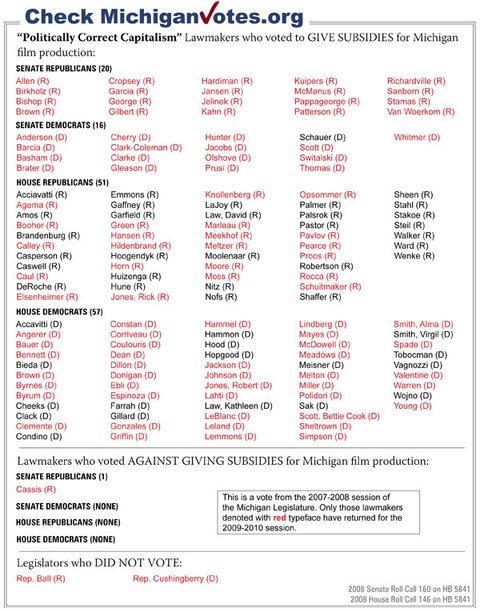 Ken Braun is the senior managing editor of Michigan Capitol Confidential. He may be reached at author@mackinac.org. For additional information and an opportunity to comment on the legislation referenced in this article, please see www.mackinac.org/10529.