A Democrat-sponsored amendment aimed at banning all Canadian trash from Michigan landfills was narrowly approved by the Michigan Senate on June 17. But exercising some legislative trickery and muscle, the Republican majority was able to re-introduce and then kill the amendment the following day. Miraculously, the Great Lakes State survived this parliamentary circus and was not subsequently buried under tons of discarded hockey sticks, Molson bottles and Gordon Lightfoot records. Like the curious fate of the amendment, much about the Canadian trash issue is not as it first seems.

Sen. Liz Brater, D-Ann Arbor, initially introduced the amendment to be part of Senate Bill 436, which would accelerate the timetable for environmental permits and empower applicants to hire independent engineers certified by the Department of Environmental Quality. This bill did eventually pass the Senate following the shenanigans regarding Brater's amendment.

If left in the bill and later signed into law, the ban on Canadian trash would not have passed legal muster because it violated international trade agreements, such as the North American Free Trade Agreement. Rather than a serious policy proposal, the amendment was a political stunt allowing senators to express nonbinding opinions on the issue. More political acrobatics would follow.

With one vacancy in the otherwise 38-member chamber, the amendment needed 19 votes for a majority. Each of the 16 Democrats voted in favor of it and were joined by two Republicans. Because of the vacancy and the temporary absence of another GOP member, this left only 18 GOP lawmakers to vote in opposition, creating an 18-18 tie. Though this was still short of the 19 votes needed to pass, ties allow Democratic Lt. Gov. John Cherry to cast a deciding vote, and he voted in favor of the amendment.

But this victory did not survive the week. The following day, Senate Majority Floor Leader Alan Cropsey, R-Dewitt, successfully persuaded the chamber to reconsider the Brater amendment. Then, on the re-vote, Cropsey declined to vote "no" and instead deliberately abstained. Even though this still left 18 votes in favor of the measure — and now only 17 opposed — it was no longer a tie and this denied the lieutenant governor his tie-breaking authority. Thus, the amendment failed.

But before politicians clamor for Michigan to close its borders from an onslaught of foreign and domestic trash, they should take note that Michigan municipalities, counties and townships also export household trash to landfills in neighboring states. 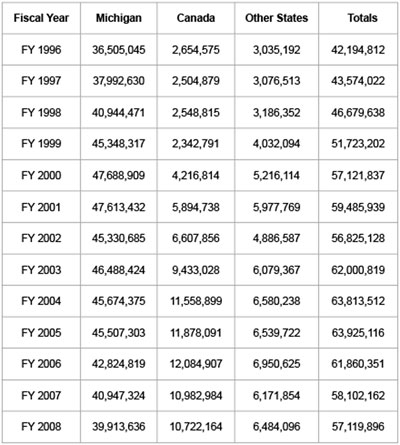 Over the past decade, there has been a significant rise in discarded televisions and computers. Much of this material is shipped to Quebec, home to a large operation especially equipped for smelting electronics and reclaiming the metals and other recyclable substances therein.

As for household waste from Canada, Michigan landfills were intended from the beginning to be a temporary solution until Ontario permitted and developed new disposal sites. Toronto, for example, only signed contracts with Michigan landfills through 2010, since it had promised that it would cease shipments of residential trash by the end of 2010. From a peak of 140 trucks per day in 2003, metropolitan Toronto's daily shipments dropped to 80 to 90 trucks per day in 2006, with a targeted reduction to 35 trucks per day this year.

"We are on track to stop all shipments of waste from Toronto at the end of 2010," said Geoff Rathbone, general manager at City of Toronto Solid Waste Management Services. "We are currently shilling about 70-75 trucks per day, and expect this to continue to decrease in 2010.

"It is difficult to estimate if we will in fact hit the 35 truck-per-day target, but as construction of facilities, which is underway, is taking somewhat longer than expected, the original estimate may be slightly off," Rathbone said. "On Jan. 1, 2011, all waste will go to our new landfill — the Green Lane Landfill near London."

The reduction in materials coming from Ontario is partially due to the expansion of the province's waste management facilities. In 2008, Waste Management received approval for the expansion of its landfill in Sarnia, Ontario, according to Tom Horton, Waste Management's vice president of Midwest public affairs. In 2009, the Toronto region of Durham received government approvals for the construction of a new waste-energy facility that is going to handle everything that is produced in the Durham region.

"To the extent that we're going to see a reduction of materials going forward in Ontario, I think the writing is on the wall," said Horton. "The industry has never seen the Ontario waste stream coming to Michigan as a sustainable disposal resource. We've always seen it as a temporary blip in the marketplace."

Horton believes it's longer. "If landfills were allowed to fully develop the property that they currently own in their landfill footprints," said Horton, "[then] without purchasing new property but developing property that may not be currently permitted for use but is adjacent to existing landfills, Michigan has well in excess of 50 years of capacity in landfill space."

The MichiganVotes.org vote tally for the original tie-vote on the amendment to ban the importation of trash from Canada appears below. The contact information for all senators can be found here. 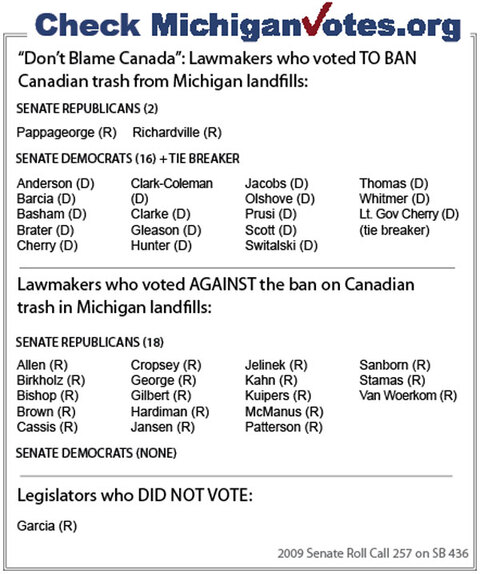 Bruce Edward Walker is communications manager for the Property Rights Network at the Mackinac Center for Public Policy. He may be contacted at author@mackinac.org. For additional information and an opportunity to comment on this issue, please see www.mackinac.org/10762.