House Bill 4047 of 2009 would declare the Detroit Public Schools to be a "first class" school district. State law defines "first class" as a public school district with more than 100,000 pupils, effectively meaning Detroit, because the second-largest district — Utica — has fewer than 30,000 students. One of the primary "benefits" of first-class status is that it prevents the creation of additional charter public schools within the city and thus insulates DPS from competition for pupils.

While the DPS pupil count for 1999-2000 stood at 173,848, it has since sharply declined to less than the 100,000-student threshold needed to retain the special protection. HB 4047 would grandfather in a pupil count of more than 100,000 for Detroit until at least July 1, 2010, thus extending the first-class status and protecting the district from additional charter school competitors.

Adding more charters within the city has been a major source of controversy, particularly with regard to DPS' largest public employee union, the Detroit Federation of Teachers. In 2003, multimillionaire philanthropist Robert Thompson proposed to donate $200 million for 15 brand-new charter high schools in the city, each with a 90 percent graduation rate guarantee. This proposed graduation rate would have been far higher than what was then reported by DPS high schools.

Though the Legislature, governor and mayor of Detroit were all initially on board and ready to approve an expansion of the charter cap so as to allow the Thompson gift to take place, the DFT responded with a one-day walkout from class so its members could drive to Lansing and stage a 3,000-person protest in front of the Capitol. Without classes to attend, many students came with their teachers that day, leading to one of the largest protests the Capitol had seen in years. In response, Detroit Mayor Kwame Kilpatrick withdrew his support and the deal fizzled. (Later, future Mayor Dave Bing arranged with Thompson to open one of his charter high schools within the city, and thus far it appears to be meeting its 90 percent graduation target.)

HB 4047, retaining the Detroit Public Schools' status as a "first class" district and protecting the district from additional charter school competition, was approved by the Michigan House on April 2 when five Republicans joined 66 Democrats voting in favor of the bill. There were 38 votes in opposition, all Republicans. The MichiganVotes.org vote tally is below. 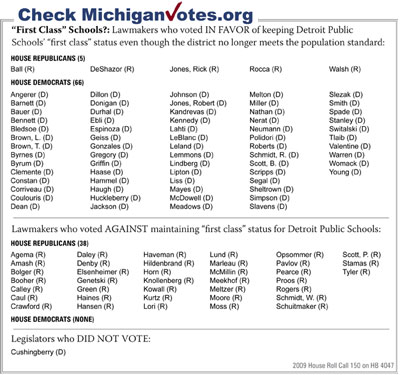 The bill is now in the Senate Education Committee.

Ken Braun is the senior managing editor of Michigan Capitol Confidential. He may be reached at author@mackinac.org. For additional information and an opportunity to comment on the legislation mentioned in this article, please see www.mackinac.org/10762.