A $188,000 appropriation for the Lobster Institute at the University of Maine checked in at number five on Time Magazine's "Top Ten Outrageous Earmarks" list for 2008. U.S. Senators John McCain, R-Arizona, and Russ Feingold, D-Wisconsin, made special mention of the Institute's contribution toward the creation of a "lobster dog biscuit" in a joint press release denouncing the practice of congressional earmarks. Citizens Against Government Waste also chimed in that U.S. taxpayers should not be forced to subsidize the "Lobster Institute for Better Dog Food."

Yet when given the chance to strike this spending from the federal budget, every single U.S. Representative from Michigan voted to save it.

McCain and Feingold define earmarks as "wasteful spending on pet projects that members of Congress may try to sneak into legislation," and "an abuse of taxpayer money" that "we can't afford as we work to get our economy back on track." U.S. Sen. Tom Coburn, R-Oklahoma, asserts that earmarks are the "gateway drug on the road to spending addiction," because they allow lawmakers access to the gargantuan federal piggy bank, thus providing a powerful financial incentive for politicians to place parochial spending interests ahead of the general taxpayer's welfare. Coburn believes the result is a Congress that continually votes to approve much larger budgets than they might otherwise support, with the byproduct of a runaway federal debt. In voicing these concerns, he echoed Thomas Jefferson, who warned that giving members of Congress the power to appropriate for local spending interests would create "a scene of scramble among the members" for the money and that this would mostly be won by those who were the "meanest."

Like Coburn, who led the fight to kill funding for the infamous "Bridge to Nowhere" in Alaska, Congressman Jeff Flake, R-Arizona, and his allies in the U.S. House of Representatives regularly attempt to break the spending addiction by offering amendments to strip out individual earmarks, such as the one for the Lobster Institute. Eighty-seven members of the U.S. House, including Flake, voted to cancel the Lobster Institute's federal earmark, but 328 members voted to keep it. Flake, the most frequent sponsor of these amendments, usually comes up on the losing side of these votes, and members of the Michigan congressional delegation often vote against him — and with the majority — to protect the pork.

In a press release announcing the product launch of a doggie treat made with lobster, the Lobster Institute describes itself as "an industry-driven organization focusing on research, technical assistance, communications, and educational outreach." The release begins by announcing that "Your dog can now be a lobster connoisseur," and then notes that bringing to market a "nutritious and flavorful lobster-based pet treat" is the result of a two-year collaboration between the Lobster Institute and its partners in the private sector.

"Our product development work here at the Lobster Institute is geared toward creating a more efficient and profitable use of the lobster resource," said Dr. Bob Bayer, executive director of the Lobster Institute. "Working with Saltwater Marketing and now Blue Seal Feeds, we were able to get this product out of the lab and into the commercial market."

In addition to the Lobster Institute's federal funding, Flake and his allies in Congress also targeted for destruction two more of Time Magazine's 10 most outrageous earmarks.

Time's second most outrageous was a $1.9 million appropriation for the Charles B. Rangel Center for Public Service at City College of New York. The earmark was inserted by none other than Congressman Charles B. Rangel, D-New York, the chairman of the House Ways and Means Committee, which is where federal tax laws are drafted. According to Time, the project's total price tag is $30 million, and it has been dubbed the "Monument to Me" by its critics. The magazine notes that a more junior member of Congress questioned Rangel about the propriety of members using taxpayer dollars to sponsor projects bearing their own names. "I would have a problem if you did it," Rangel replied, "because I don't think that you've been around long enough."

Only 108 members voted to cut federal taxpayer subsidies for the Rangel Center. Five Michigan Republicans and four Democrats were among the 316 who voted to save the earmark.

Time's number seven most outrageous earmark for 2008 was a $50,000 appropriation to help establish the National Mule and Packers Museum in Bishop, Calif. Time says that Bishop is the "mule capital of the world" and sponsors a "Mule Days" celebration each year that draws "30,000 people, and 700 mules." Flake's amendment to cut the funding received only 69 votes, against 352 to continue the spending. Nearly every member of the Michigan Congressional delegation voted in favor of protecting funding for the museum. The lone Michigan member voting to kill the earmark was former Congressman Tim Walberg, R-Tipton.

An attempt by Flake to kill another, more expensive museum earmark fared only slightly better. His proposal to erase a $1.18 million taxpayer subsidy for the Kansas Regional Prisons Museum in Leavenworth, Kan., failed when only 112 votes were cast in favor of cutting it. Four Michigan Republicans and six Democrats were among the 317 votes cast in favor of protecting the earmark.

Flake's crusade to kill earmarks — which dates back to 2004, when he began spotlighting an "Egregious Earmark of the Week" — may have come with a personal cost. After the Republicans lost control of the House following the 2006 election, many committee assignments had to be pared back to make room for the Democrats assuming the majority of the posts. Flake's primary committee assignment was the House Judiciary Committee, where his seniority exceeded other Republicans on the panel and should have placed him beyond reach.

However, the Republican Steering Committee voted to remove Flake anyway. Syndicated columnist Robert Novak speculated afterward that the reason was that the GOP Steering Committee was "dominated by Appropriations members who resent[ed] Flake's vigorous campaign against earmarks."

"I was told that I was taken off the Judiciary Committee because of 'bad behavior,'" Flake told the Christian Science Monitor. "I guess to be a team player you only challenge Democratic earmarks. I don't think that's right."

The votes of Michigan's congressional delegation on the five earmark amendments noted in this article are below. Please note that these votes took place only in the United States House of Representatives and thus were not presented to Michigan's two U.S. Senators. Additionally, two members no longer serve in Congress: Joe Knollenberg and Tim Walberg. 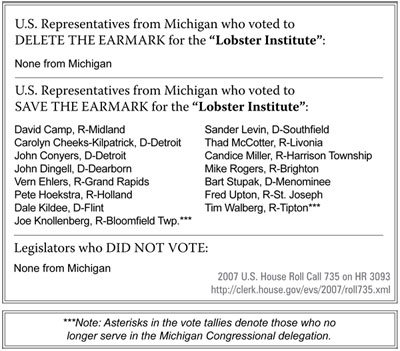 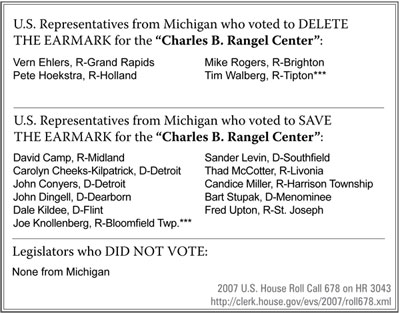 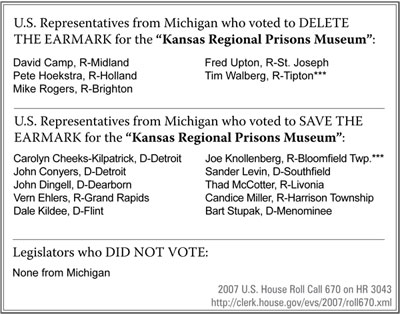 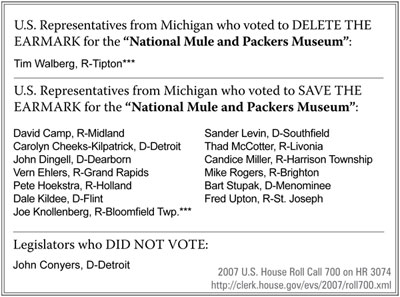 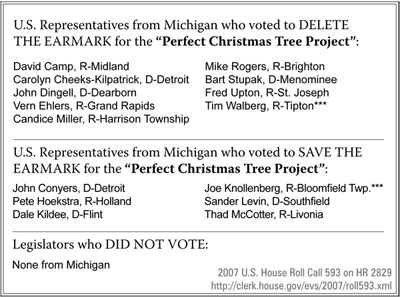