Politicians love to spend other people's money. After term limits, perhaps their most hated institution may be a balanced budget requirement. In Michigan's Constitution, it's Article 5, Section 18:

"Proposed expenditures from any fund shall not exceed the estimated revenue thereof."

The Constitution also puts restrictions on borrowing for long-term capital investments like roads, sewers and bridges. Article 9, section 15 states, "The state may borrow money for specific purposes . . . by acts of the legislature adopted by a vote of two-thirds . . . and approved by a majority of the electors . . ."

Our political class may not be so good at solving real problems, but its members can be very creative at finding ways to evade restrictions on their ability to spend.

One example occurred in 2007 (www.michiganvotes.org/2007-HB-4851). Around $90 million left over from past borrowing ("bond sales") had accumulated in an entity called the "Michigan Higher Education Student Loan Authority," which subsidizes and guarantees college loans. A bill was passed transferring this to the general fund to pay for current spending in excess of expected revenues — that is, to avoid spending cuts.

If asked, most of the 137 lawmakers who approved that "fund raid" would say something like this: Because the source of the funds was unspent money from earlier borrowing for a specific purpose, and since "refinanced" at lower interest rates, somehow using it to pay for regular spending didn't count. False: The state's balance sheet took a $90 million hit, and future state college loan subsidies will have to be paid for in some other way - like with new borrowing.

That kind of ad-hoc raid on specialized funds isn't uncommon, but in 2005 our politicians discovered a mother lode when they created a way to borrow against future revenue from the 1998 tobacco lawsuit master settlement agreement (www.michiganvotes.org/2005-HB-5048). The settlement awarded Michigan nearly $300 million in annual "damages" through 2025. States can spend this any way they choose, and here it mostly goes to Medicaid and non-need-based college scholarships.

So isn't borrowing against tobacco lawsuit revenue covered by the same restrictions as other long-term debt — a two-thirds vote in the House and Senate, followed by a vote of the people? Not under Public Act 226 of 2005, the law that created the "21st Century Jobs Fund" business subsidy program (which also violated a 154-year-old Constitutional prohibition on the state owning private companies — state pension funds excepted — but that's another article: www.mackinac.org/7371).

Here's how they pulled it off: That 2005 law began with a magic wand — a legislative "finding and declaration" that the tobacco settlement revenue stream is actually an asset that can be sold or "securitized" by borrowing against it. But ignore that bond broker behind the curtain, it's really just an asset sale, like unloading surplus state cars or airplanes, so no messy supermajority or popular vote is required.

With that device in place, the Legislature extracted $400 million from future taxpayers. That's the present value: With interest included over the next 20 years, the debt service amounts to $800 million — $40 million each year that won't be available to pay for other state spending. What will replace that money? Either fewer government services or higher taxes and fees.

But wait, there's more! Actually that's just the beginning, because once the door was opened to borrow against future tobacco lawsuit revenues, it stayed open. The "21st Century Jobs Fund" was at least rationalized with a supremely misguided "economic development" argument; the next installment, in June 2007, was pure Washington-style "borrow-and-spend."

The measure authorized $415 million in new borrowing to close the gap between how much legislators wanted to spend and how much tax revenue they expected to collect (www.michiganvotes.org/2007-HB-4850). This new debt burden added insult to the injury of a $1.4 billion tax increase that passed four months later as the next (temporary) "solution" to this state's (ongoing) over-spending problem — a.k.a. "the deficit crisis."

But that's not all. The next trip to this loan window happened just last year, when 37 senators and 86 House members voted to borrow another $60 million for a subsidy to tourism businesses in the form of state advertising, called "Pure Michigan" and related campaigns (www.michiganvotes.org/2008-SB-1224).

No doubt most of those 123 legislators who said "charge it" can hold forth at length on how valuable that program is. The same applies to the 137 who approved $400 million in debt for other business subsidies in 2005, and the 133 who used the credit card to avoid $415 million worth of spending reforms in 2007 long enough to pass a major tax increase.

Here's what they can't do: Make a moral case for robbing tomorrow's taxpayers to pay for spending that benefits today's politicians and select special interests.

Don't expect the borrow-and-spend to stop, either. Right now, legislation is before the House Tax Policy Committee that could be used to authorize another $250 million dip into your children and grandchildren's pockets, this time for electric car subsidies (www.michiganvotes.org/2009-HB-4719).

But don't worry — it's from the children.

The MichiganVotes.org vote tally for the aforementioned "borrow-and-spend" votes are located to the right. Each of these votes took place during the 2007-2008 session of the Michigan Legislature, and some of the lawmakers listed are no longer in office. Some of those no longer serving have moved on to other elected offices or are announced candidates for the same. Official Web sites and campaign Web sites that could be located for these politicians are provided below. 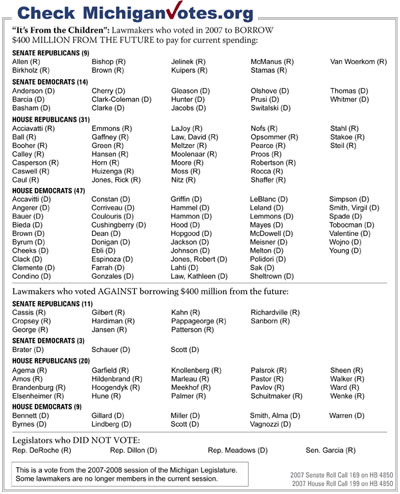 Jack McHugh is senior legislative analyst at the Mackinac Center for Public Policy and the editor of MichiganVotes.org. The author may be contacted at mchugh@mackinac.org.