The creation of the fiscal 2010 state budget saw a surprising development: The Republican leadership of the Michigan Senate and the Democrat leadership of the Michigan House came together and agreed to try a unique bipartisan gambit that would have paid the state's bills and balanced its books by spending less than requested by Democrat Gov. Jennifer Granholm. This raised the possibility of the governor receiving bipartisan budgets and refusing to sign them, setting the stage for the most peculiar state spending battle in a decade already full of them.

The bipartisan budget cooperation was ultimately undone by dozens of lawmakers from both parties in the House unwilling to buck the Michigan Education Association school employees union by casting votes for relatively modest cuts to the K-12 school budget.

The story begins back on Feb. 12, when Gov. Granholm made her budget recommendation for the coming fiscal year. This included some modest spending reductions, some increases, and also a collection of "revenue adjustments" (i.e., tax and fee hikes). As the Oct. 1 dawn of the new fiscal year drew closer, revised revenue estimates made clear that a deteriorating state economy would provide less tax revenue than had been projected in February. By early summer, the gap between the amount the governor would like to spend and how much the state treasury expected to collect had grown to an estimated $2.8 billion. More than half of this could be covered by federal "stimulus" dollars, but that still left an overspending crisis of $1.2 billion.

The governor's response to these new numbers was to tweak upward her recommendation for more program cuts, and also to demand more tax hikes. Meanwhile, staring at the reality of a fiscal cliff, legislative leaders in both parties began to consider alternatives. Specifically, Rep. Andy Dillon, the Democrat Speaker of the House, and Sen. Mike Bishop, the Republican Senate Majority Leader, agreed in principle to a budget that would include no tax hikes (at least at first), and would leave some federal "stimulus" money in the kitty for next year's budget.

The details still needed to be worked out, and the breakthrough on this was announced on Sept. 16, just 15 days before the start of the new fiscal year. Specific department "budget targets" were endorsed by Dillon, Bishop and the chairs of the House and Senate appropriations committees, Rep. George Cushingberry, D-Detroit, and Sen. Ron Jelinek, R-Three Oaks, respectively.

Notably, the governor had played no discernable role in crafting the agreement. She released a statement denouncing its details and demanding a budget that did not make "harmful cuts."

Furthermore, even though legislative leaders from both parties were on board, they still had to persuade their back-bench colleagues to join them. Complicating matters, the leaders of the minority party in each chamber were split: House Minority Leader Kevin Elsenheimer, R-Bellaire, swiftly endorsed the proposal, while Senate Minority Leader Mike Prusi, D-Ishpeming, echoed the governor's denunciation.

The Dillon/Bishop agreement called for spending less than what the governor wanted on a variety of programs: welfare, community health, local government revenue sharing, college scholarships and more. Special interests started to push back before the ink was dry. The MIRS Capitol Capsule newsletter (www.mirsnews.com — subscription required) reported that groups "supporting virtually every service funded by state government began mobilizing," lobbying lawmakers to reject the deal or the governor to veto it.

In the other corner was Michigan's business community. Charlie Owens, director of Michigan's National Federation of Independent Businesses affiliate, told MIRS that the bipartisan Dillon/Bishop agreement was "the kind of leadership that small business has been looking for from our lawmakers," and that "as small business owners struggle to balance their own books while facing falling sales and revenues, they have consistently asked the state to do the same."

Despite many objections and much hand-wringing, most of the Dillon/Bishop budgets were eventually passed in both the House and Senate. Bishop's Senate GOP caucus held firm (with just a couple exceptions), passing the leaner budgets on party-line votes (also with just a couple exceptions). Dillon faced a greater challenge in his 67-member House Democrat caucus, the vast majority of which did not support lower spending amounts. Needing 56 votes to pass each budget, the Democrat Speaker was relying on getting most or all of the 43 Republican votes.

On Sept. 29, MIRS published a roundtable discussion on how this would work out, featuring the views of several political commentators. When asked if House Republicans could be counted on to provide "yes" votes, one Democrat campaign consultant offered the following:

"If House Republicans can't be counted on to support an all-cut budget, what is the reason for the existence of House Republicans? That caucus is filled with hard-line conservatives who talk tough in GOP primaries. Now is their chance to shine and cut, cut and cut some more."

Two budgets proved especially troublesome. The first was the one containing $163 million less for revenue-sharing payments to local governments than the governor wanted. It passed the Senate on a strictly party-line vote, with all GOP members supporting it, but two tries were needed to muster the 56 votes required in the House.

Dillon and Cushingberry were among the 15 Democrats who voted "yes." Fifty Democrats voted "no," along with two Republicans: Kevin Green, R-Wyoming, and Tory Rocca, R-Sterling Heights.

Unfortunately, that was the high water mark for the Dillon/Bishop "all cuts" budget, because lawmakers in the House were unwilling to support the School Aid budget, the main funding vehicle for public K-12 education. This would have reduced funding by 2.9 percent compared to the 2008-2009 school year, mostly by reducing the per-pupil foundation allowance by $218 per student (compared to the $59 per-pupil reduction proposed by the governor in February.) At around $13 billion, the School Aid Fund is the largest single annual expenditure of state government.

Opposition to the 2.9 percent reduction was spearheaded by the Michigan Education Association, the state's largest school employee union. Describing a "full court press" by the MEA on Sept. 29, a MIRS source identified a dozen House Republicans whom the union was allegedly targeting in an effort to persuade and pressure them to vote against the cut.

A "Republican" source told MIRS the vote would be problematic because nine House Republicans planned to run for the state Senate in 2010 and "are nervous about not receiving the union's endorsement." While the union's support and influence is generally and traditionally greater with Democrat lawmakers, 11 of 43 House Republicans were MEA "recommended" candidates during the 2008 November general election (see: www.mackinac.org/10317.)

Given the party caucus dynamic described above, an MEA effort to pick off Republican votes on the K-12 budget would disproportionately damage the prospects for its passage.

On Sept. 30, the last day before the new fiscal year, the K-12 school budget was finally brought up for a vote in the House. Two attempts were made to pass it, one during the day and another in the early morning hours of Oct. 1. Both failed.

Both times, about a dozen Republicans were either not voting or were pressing their red "no" buttons. Roughly 30 Republicans promptly pressed the green "yes" button.

Both times, the voting board was held open for extended periods to allow attempts to round up a majority. On the Democratic side, legislators were either sitting on their hands, or had pressed the red "no" button.

Three different reliable observers for Michigan Capitol Confidential witnessed one or both of these attempts and recorded the following as some of the Republicans showing an early and definitive "no" vote while the voting board was open:

No complete and official list of the Republicans most eager to vote "no" is available for two reasons:

On the first vote, when it was clear that there was not sufficient support for the measure, the House leadership moved to "clear the board," wiping out the record. This device is often used as a kind of "do-over," allowing more time for arm-twisting, logrolling or other vote-garnering tactics.

On the second and final vote, when it was again clear that the measure was well short of passage, Speaker Dillon elected to throw in the towel and record the vote as a defeat. Just prior to the vote being counted, with just two exceptions, the entire Republican caucus switched sides and voted "no," an apparent attempt to avoid being on the official record with a vote to reduce their local school funding. MIRS characterized this decision as "apparently designed to allow every House member to have a chance to say they voted against it."

The official vote was a lopsided 106-2. Voting with the majority was one of the authors of the "all cuts" budget, House Speaker Andy Dillon. The two lone House members willing to publicly and officially vote in favor of a 2.9 percent reduction in K-12 spending were Rep. Tom McMillin, R-Rochester Hills, and Rep. Justin Amash, R-Kentwood.

The failed school aid funding vote was the death-knell for the bipartisan leadership "all cuts" budget. As a temporary fall-back, a one-month "continuation budget" was enacted, with a new "deadline" of Oct. 31. Though Bishop maintains an official reluctance to increase spending or raise taxes to balance any budgets, it is widely understood that this delay will work to the advantage of the governor's spending priorities.

Back in the real world (kind of) the clock was ticking toward Oct. 20, the day when the first state school aid payments were payable to local school districts. Facing this deadline, a second version of the K-12 budget was ratified by both the House and Senate on Oct. 8 and then sent to the governor. This one called for only a $165 per-pupil reduction, rather than the previous budget's $218 cut. This higher spending meant that either "stimulus" money would have to be borrowed from next year's budget, taxes would have to be raised, or both. The decision on which was put off to a later date.

The Michiganvotes.org vote tallies for the General Government budget with the revenue sharing cut, and the School Aid Fund budget with the 2.9 percent reduction, are below. 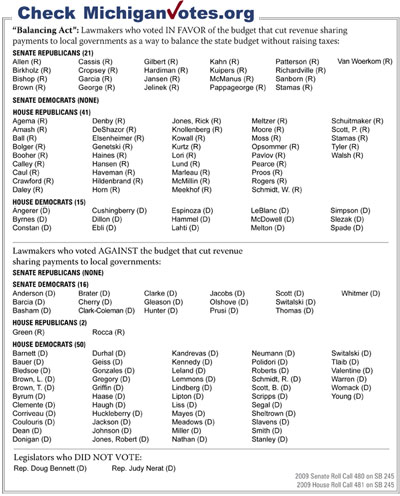