On June 28, 2007, the Michigan Legislature voted to create the Michigan Business Tax, a replacement for the Single Business Tax that had been dreaded for decades by businesses across the state. That day, Michigan's business community expressed significant opposition to creating the MBT, and compelling evidence that its creation was openly defying a mandate for tax reform laid out in a citizen-initiated law that had ordered repeal of the SBT one year earlier. These concerns were sufficient to persuade a majority of the Republicans in the state Legislature to vote against ever creating the MBT.

But on Dec. 1, 2007, just before the MBT took effect, the Legislature added a 22 percent surcharge to it, increasing the new tax's annual bite against businesses by $614 million. The outrage regarding this second vote has been so substantial that it has obscured the very real animosity directed toward the creation of the MBT in the first place. Confusion regarding these two votes bubbled up this fall when a pair of congressional candidates planning to run in 2010 to replace outgoing U.S. Rep. Pete Hoekstra, R-Holland, tussled over what it means to be responsible for creating the Michigan Business Tax.

There are four Republican candidates seeking that party's nomination, and one of them issued a statement on Oct. 7, 2009, chiding two of the others because they had "voted for the job-killing Michigan Business Tax." A businessman quoted in the release also says the "MBT is unfair to small business and could be the worst tax in the country," and that "It should never have passed the Michigan Legislature."

The two politicians referenced were former state Rep. Bill Huizenga, R-Zeeland, and current state Sen. Wayne Kuipers, R-Holland — both of whom voted to create the MBT in June of 2007. Each is now an announced candidate to replace Hoekstra.

Huizenga shot back, saying that the accusation had "incorrectly stated that I voted in favor of the MBT as it currently exists when I was a member of the Michigan House of Representatives." Though Huizenga admits to voting "yes" on the first vote, saying that the original MBT "was designed to ease the burden for Michigan companies in several ways," he further claims that his critic naïvely does not understand the nature of the two votes and that it is the second one — the one creating the 22 percent surcharge — that turned a good MBT bad.

Gov. Jennifer Granholm shared Huizenga's optimism over the original prospects for the MBT. In a June 13, 2007, news release from her office announcing the agreement to create the MBT, the governor said the tax "makes Michigan more competitive, helping to attract and keep new job providers ... ." The same release featured Senate Majority Leader Mike Bishop, R-Rochester, who noted that the MBT "creates a more manageable structure than its predecessor and will help set Michigan on the path to economic recovery ... ." House Speaker Andy Dillon, D-Redford Twp., also chimed in that it was the "right plan to move Michigan forward."

"Michigan's job loss is clearly our most pressing crisis, and this agreement certainly moves us in the direction of solving that crisis for our manufacturers and other sectors," opined state Sen. Roger Kahn, R-Saginaw, in a statement released a couple of days later.

And on June 29, 2007, a day after voting for the proposal, then-state Rep. Mike Nofs, R-Battle Creek, told the Battle Creek Enquirer: "In any business tax there will be some winners and some losers, but with this plan, there are more winners." (Nofs is now a member of the Michigan Senate.)

The much-hated SBT was repealed by a voter-initiated ballot drive in 2006. Spearheaded by Oakland County Executive L. Brooks Patterson — who directed the collection of voter signatures — and ratified by both chambers of the state Legislature, the preamble to the law encourages legislators to create a new business tax that is "less burdensome and less costly to employers, more equitable, and more conducive to job creation and investment" than the SBT.

But the MBT as created in June 2007 clearly failed to adhere to the "less costly" mandate of the citizen initiative, in that it was deliberately designed to be "revenue neutral" — i.e., just as costly to businesses as the SBT that it replaced. The governor and many lawmakers, reluctant to make the budget cuts necessary to reduce business taxes, demanded nothing less. (And they would subsequently demand much more when they imposed the 22 percent MBT surcharge along with a $765 million personal income tax hike later in the year.)

The MBT as originally conceived also failed the test of being "less burdensome" and "more equitable." It was these deficiencies that drove many representatives of Michigan's job providers to oppose its birth.

The Michigan Chamber of Commerce, representing 7,000 businesses across the state, was one of them. The Chamber's tax experts discovered dozens of problems in the MBT, including hidden tax hikes, language that would cause needless lawsuits, and more. The Chamber issued a statement of opposition to passage of the MBT prior to the vote in June 2007, and then one year later published a "2007-2008 Legislative Voting Record" designed to "provide the business community and other interested parties with a measure of how each member of the Michigan Legislature voted on a wide range of issues impacting on Michigan's economic competitiveness." One of the 21 votes used to hold lawmakers accountable for their conduct toward business over the two-year period was the vote to create the MBT.

Likewise, on its Web site, the Michigan chapter of the National Federation of Independent Businesses calls the MBT a "bad tax" and references the original vote to create the MBT as follows: "Written by BIG business for BIG business, the Michigan Business Tax was passed on June 28, 2007, ... ."

This is an allusion to the new tax law's bias toward big manufacturing companies. The MBT was created with the schizophrenic assumption that lower taxes were justified and beneficial to economic growth only if a business sector had garnered the favor of politicians. According to the Michigan Department of Treasury, it was designed to reduce the 2008 tax burden on the manufacturing sector as a whole by 21.3 percent, as compared to the old SBT, and to reduce automotive sector business taxes by 97.5 percent. But because the original MBT was "revenue-neutral," meaning just as costly as the SBT, the big tax breaks for car companies that would soon be begging for federal bailout money had to mean tax increases for others - in particular, the merchants and other small businesses represented by the NFIB.

Likewise, the Michigan Business and Professional Association and the Michigan Food and Beverage Association came out against the MBT just prior to the first vote to create it. Ed Deeb, president of both organizations, told the MIRS Capitol Capsule newsletter on June 22, 2007, that the MBT "clearly isn't for our more than 20,000 small business members." Deeb also noted that the outcome of the MBT process had left his membership with "the feeling that they are under attack by government" which is doing "what is in the best interest of big business."

Though the MBT was passed by the Legislature and signed by the governor despite this opposition, 34 members of the House of Representatives did vote against it - all Republicans. Just 17 House Republicans, including Huizenga, voted for it.

Those voting "no" may have preferred the alternative: following the original law and creating a business tax that really was less expensive, less complicated and less burdensome than the old SBT. Cutting taxes for manufacturers while holding other businesses harmless was a viable option. Also possible, and preferable, was the option of cutting taxes for every Michigan business.

At the time, the Mackinac Center for Public Policy was circulating a list of nearly $1.9 billion in budget cutting and economic-growth-generating ideas that could have eliminated the state's hunger for some or all of the tax dollars being taken from job providers by the SBT (see: www.mackinac.org/7602). These ideas included saving $75 million per year by eliminating the 21st Century Jobs Fund, a subsidy being given by politicians to favored businesses and industries; saving $65 million by shifting state police road patrols to less expensive county sheriff deputies; saving $50-$300 million by requiring schools to contract out for noninstructional services; saving $26 million by cutting special state payments to wealthy school districts; and much more.

Because the later addition of the 22 percent surcharge made the MBT far worse than its severest critics could have imagined, we will never know if the original MBT contrivance would have panned out as poorly as those warnings (or even worse). Today, the Michigan business groups that warned against hatching the MBT in the first place are quietly resolved to just reducing that 22 percent surcharge, to say nothing of getting it removed. Because Michigan's business tax system has gone from bad (SBT) to worse (MBT) to much worse (surcharge) in such a short period of time, it is perhaps understandable that Michigan politicians may sometimes forget what role they played in the drama.

Unfortunately for Michigan's job providers, a majority of Michigan's lawmakers also quickly forgot why the SBT was being replaced in the first place: Public Act 325 of 2006.

The purpose of this initiated law is to:

(a) Repeal the single business tax on business activity in this state after December 31, 2007; and

(b) Encourage the legislature to adopt a tax that is less burdensome and less costly to employers, more equitable, and more conducive to job creation and investment.

The Michiganvotes.org vote tally for creation of the Michigan Business Tax is below. 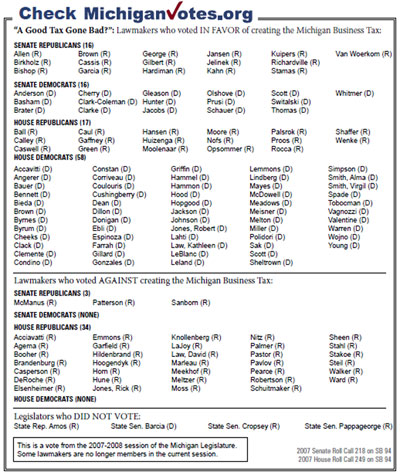