The Michigan Legislature has recently taken up for consideration several of the bills that have appeared in this publication's "I'm Just a Bill." Here is a brief summary of the bills and the corresponding votes. The quoted and italicized descriptions are from MichiganVotes.org. The vote tally for each of these bills is below.

"The bill proposes to require retailers to attach an identification tag signed by the buyer to kegs of beer when they are sold, and not return the keg deposit unless the tag is still on the keg, subject to a $50 fine for failing to do either. A non-retailer possessing a keg without the tag would be subject to a $500 fine and 93 days in jail."

The bill was introduced by Sen. Alan Sanborn, R-Richmond, and was noted on the back cover of the May/June 2009 edition of Michigan Capitol Confidential. On June 25, the Michigan Senate voted 34-0 in favor of approving this bill and sending it to the House of Representatives. 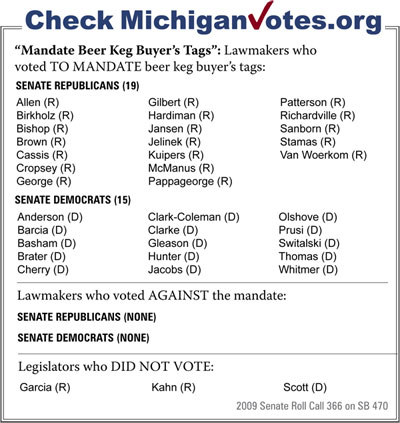 "The bill proposes to appropriate up to $500,000 to pay for the remonumentation of the Michigan-Indiana state line proposed by Senate Bill 374."

Senate Bill 374 "... proposes to 'authorize the remonumentation of the Michigan-Indiana state line' and also 'authorizes a specific process that includes five commissioners from each state.'"

Sen. Ron Jelinek, R-Three Oaks, is the sponsor of both bills. Senate Bill 375 was featured on the back cover of the May/June 2009 edition of Michigan Capitol Confidential. On May 6, the Michigan Senate voted in favor of approving both bills and sending them to the House of Representatives. In each case, the vote was 34-1, with Sen. Nancy Cassis, R-Novi, casting the lone "no" votes. 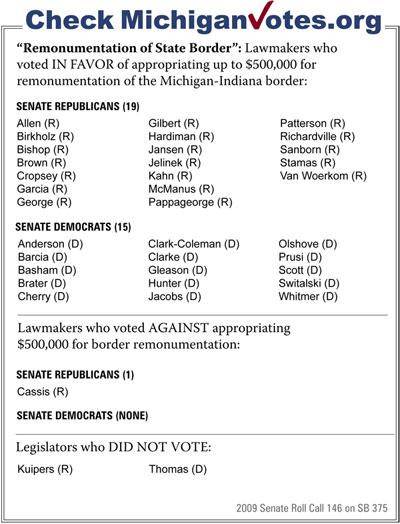 "The bill proposes to restrict sales of cigarettes to only those meeting the standard for self-extinguishing cigarettes established by the state of New York. Cigarette makers would have to certify and pay a $1,250 tax for each 'brand family' every three years. Violations would be subject to fines up to $100,000 per month, and $25,000 per month for retailers. The bill also would increase various reporting requirements."

Sponsored by Sen. Tupac Hunter, D-Detroit, the bill has since become Public Act 56 of 2009, after being signed into law by the governor on June 25. A previous version of this legislative idea - 2007 House Bill 5111 - appeared on the back cover of the November/December 2007 edition of Michigan Capitol Confidential.

The Michigan Senate voted 37-0 in favor of Senate Bill 264. The vote in the House of Representatives was 102-6. 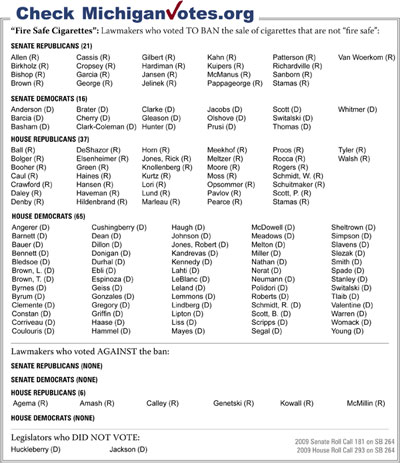 "The bill proposes to change the name of the state government Commission on Spanish-Speaking Affairs to the 'Hispanic/Latino Commission,' and require this commission to 'coordinate a Hispanic Heritage Month celebration,' a Cinco de Mayo celebration and a Cesar Chavez day celebration in addition to its current duties. These include securing 'appropriate recognition of Spanish-speaking accomplishments' and advising the governor and legislature on the 'coordination of state programs serving Spanish-speaking people' and on 'the nature, magnitude, and priorities of the problems of Spanish-speaking people,' etc."

Introduced by Sen. Valde Garcia, R-Howell, this original version of the bill appeared on the back page of the May/June 2009 Michigan Capitol Confidential.

However, as the bill worked its way through the Senate this summer, it was amended "to replace the previous version of the bill with one that does not specify specific holidays or place in statute a requirement that the commission organize a Cesar Chavez day celebration."

According to a Senate Fiscal Agency analysis of the bill, the "Commission on Spanish-Speaking affairs is currently staffed with 2.0 FTEs [full time equivalent staff] supported by $237,700 ..." 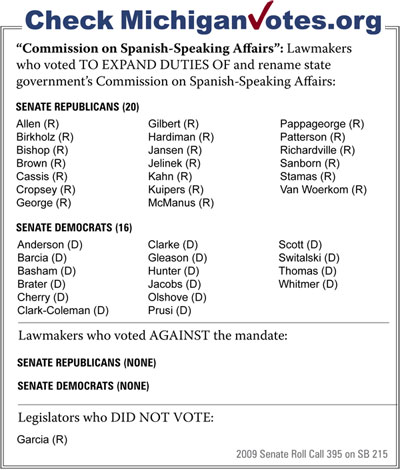