A rather blistering May 16 Livingston Daily editorial asked a few simple questions of three state lawmakers about the Michigan Film Incentive and how well it's working. Two of the legislators responded in a guest column Sunday, arguably dodging the real questions raised in the original editorial and putting up a weak defense of the two-year-old subsidy program.

The questions, as posed in the letter-style editorial, titled "Dear lawmakers: What can you tell us about film money?" appear common-sense, especially as they related to a production that took place in Livingston County:

"How much money did "The Wannabes" production receive from taxpayers? Since it is our money, you might think that is a simple question. But it's not. As mere taxpayers, we are not entitled to know. That's due to a law passed by you, Senator (Valde) Garcia, and inherited by Representatives (Bill) Rogers and (Cindy) Denby when you were elected to office in 2008.

Reps. Bill Rogers, R-Genoa Township, and Cindy Denby, R-Handy Township, responded June 6 with a letter of their own, in which they argued:

"This program has been scrutinized probably more than most incentive programs in Michigan, and we agree that the more transparency in government spending we have, the better decisions will be made to assure that our tax dollars are being spent to their best potential in moving Michigan forward during this stressed economic time."

While much has been written about transparency, the word "scrutinized" is misleading. The state has made true scrutiny all but impossible, actually going so far as to prohibit the MFO from making public whether or not the state has finalized and subsidized a studio deal announced by the governor or if it has spiked the deal forever. Did legislators really intend for the MFO to throw around tens of millions in incentives with this much state secrecy?

A Mackinac Center investigation into the aforementioned studio deal first raised these questions. Now the Grand Rapids Press and The Detroit News have joined the chorus and in fact are calling on the state House to pass new transparency laws.

In their Livingston Daily column, Reps. Rogers and Denby do not address the pending legislation, unless it is referred to in their sentence: "We have also supported modifications to address additional transparency concerns. ..."

Instead, they seem to think that the existing film incentive legislation offers enough information and transparency for taxpayers to ascertain the subsidy program's effectiveness: "Also, citizens are able to see a breakdown of expenditures for goods, services and labor for each year."

This is true to a certain extent. The Michigan Film Office makes its legally required annual report available on its website. The 2009 report features 20 pages, only one of which contains any information about expenditures: 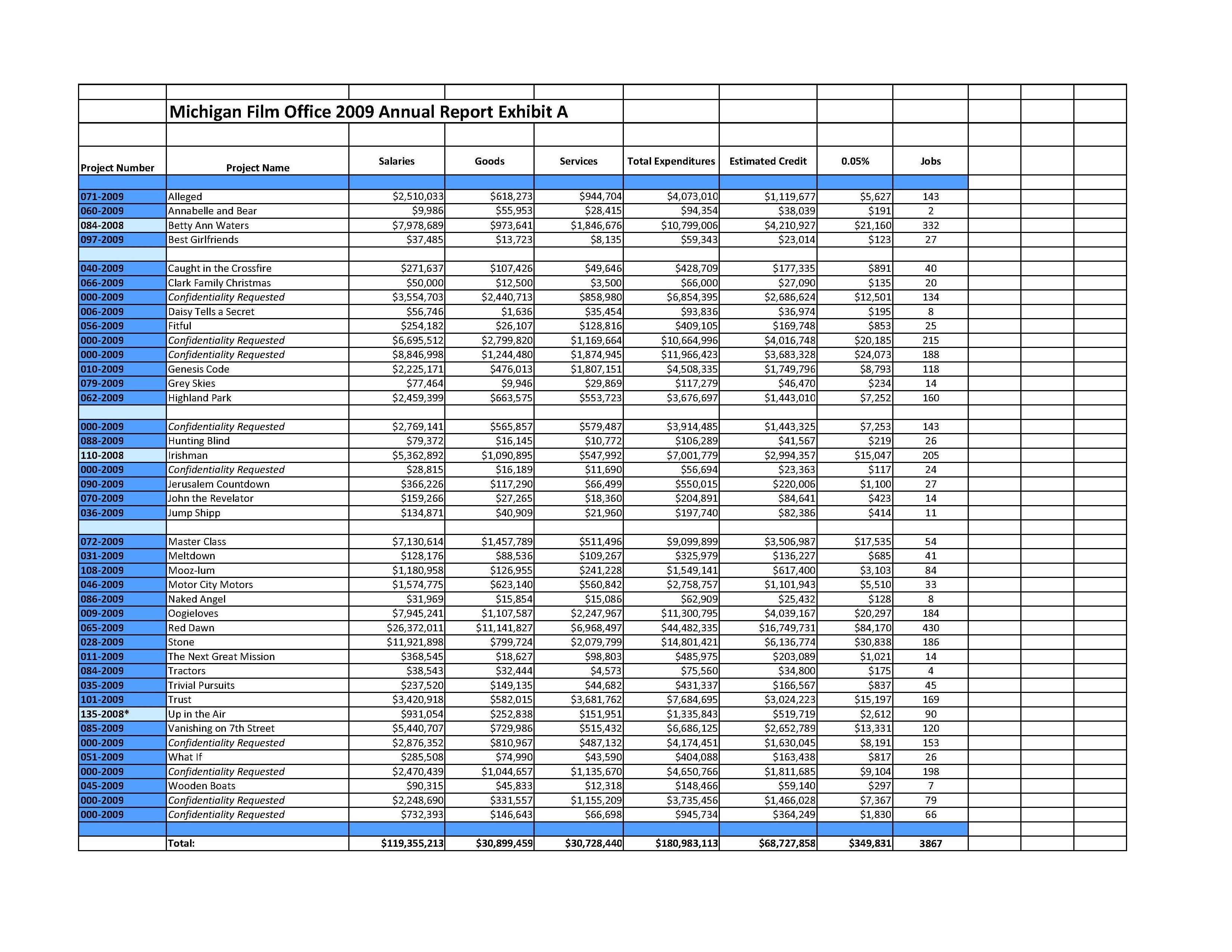 While this spreadsheet does provide the bare minimum information required by law and may technically list "expenditures for goods, services and labor," it can hardly be called a "breakdown." How much money was spent on travel? How much on hairstylists? How much on meals?

One might also ask why the "Salaries/Wages" listed in this spreadsheet include those of actors (up to $2 million per actor) but the "jobs" column does not. For that matter, the "jobs" column also excludes "extras."

These two state legislators should be commended for responding to an editorial directed to them. The newspaper is awaiting a reply from a third lawmaker. That being said, their two-page response simply regurgitated much of the information in the Film Office report, supported only by anecdotal evidence that often accompanies such film incentive promotion. In fact, a lone reader comment below the article summed it up quite well: "They must have forgotten to print page 3 because they didn't tell us anything in the first two pages."