A new law will allow retired nurses who worked for the state Department of Corrections to return to a job with the department on a part-time basis and collect both their full pension payout and a salary. This "double dipping" by state workers is prohibited by a 2007 law, according to the House Fiscal Agency. The new bill was advanced because the Department of Corrections states that it has a nursing shortage and is in need of an enticement to bring more help to their facilities.

A memo from the Senate Fiscal Agency indicates that the policy might bring about "modest savings" for the department.

However, the SFA also notes that savings for the Department of Corrections could come at a cost in another area because it will encourage current nurses to retire early and then return for the salary on top of their full pension payout. To the extent that this occurs, it will increase claims against the state's public employee pension system.

The Department of Corrections testified in favor of the bill when it was in the House Judiciary Committee. The legislation was also endorsed by the United Auto Workers Local 6000, a Michigan state employees' union.

On March 17, 2010, the Michigan Senate voted 37-1 to approve the bill. The lone dissenting vote was Sen. Michael "Mickey" Switalski, D-Roseville.

Shortly thereafter, on April 13, the Michigan House voted 100-7 to approve the bill. The dissenting votes were all Republicans.

Switalski gave a short address in the Michigan Senate, just before the vote in that chamber, explaining his concerns with the legislation. His remarks are reprinted below.

A MichiganVotes.org listing of the roll call vote in both chambers is below. 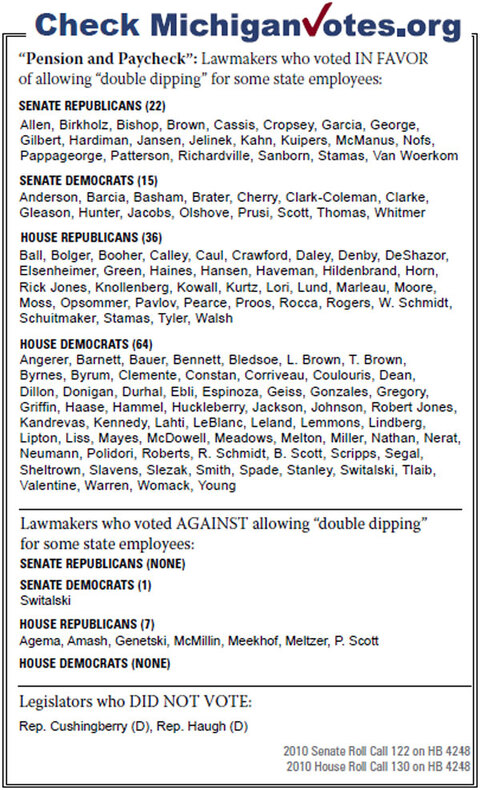 Senator Switalski's statement is as follows:

This bill does not create new jobs for people who are laid off or unemployed. This bill changes the law to allow workers already drawing a public pension to draw a second paycheck. It gives the lucky ones two checks while the unemployed get none. Regrettably, this practice is growing. It is an element in the Governor's retirement reform package. Current employees could retire and return part-time to do the same job. We have a growing number of contract employees in state government who too often are retired state employees who walk through a revolving door and return doing the same job at twice the pay; while low-seniority state employees are laid off to free up funds to pay the contractors.

Then we have the worse abuse, the DROP program that allows State Police to collect their pension without ever retiring for five years. We laid off troopers last year while we were providing others a chance to double dip. This hurts the solvency of the retirement fund and wastes the money we spend on a troopers school.

These practices in this bill are incompatible with our goals of reducing unemployment in Michigan. The policy must change.

The original version of this story was posted online on March 29, 2010.