In 2007, both of Michigan's senators and seven of the House of Representative members currently serving voted to raise the federal minimum wage. However, all nine of these elected officials offer unpaid internships for their congressional offices.

This information comes on the heels of an Obama administration announcement this past spring that the Department of Labor would begin cracking down on unpaid internships offered by private businesses. The department seeks to eliminate unpaid internships for nearly all for-profit companies.

Some believe this is a sign of hypocrisy by these members of congress and that there is value in unpaid internships.

"If these congressional members truly believe it is exploitation to hire workers below the minimum wage, then surely hiring workers for nothing is even worse," says Donald Boudreaux, a professor of economics at George Mason University.

"How do they explain themselves?"

But a review of these candidates' websites shows that they all offer unpaid internships for congressional staff members and pages. Nearly all the offices offer only unpaid internships, the only exception being Rep. McCotter's office, which pays a stipend for its full-time interns, but nothing for those working part-time.

"The research says that the only true minimum wage is zero, which is what many people find themselves making as a direct result of being priced out of jobs as a result of government mandates," said Michael LaFaive, director of the Mackinac Center's Morey Fiscal Policy Initiative.

LaFaive believes many youth take unpaid internships as a stepping stone for their first job and that outlawing unpaid internships hurts workers. "If politicians think they can simply command that people are worth 'x' amount without consequence, than I dare them to raise the minimum wage to $100 so we can all live in a workers' paradise.

"The reason they don't is because they know such a tactic would cause widespread unemployment and may even cost them their own jobs."

But despite voting for the higher minimum wage, Sen. Levin's website says, "The [internships] are non-paid positions that last five to 12 weeks during the summer or for more extended periods during the school year."

None of the senatorial or congressional offices responded to requests for comment. 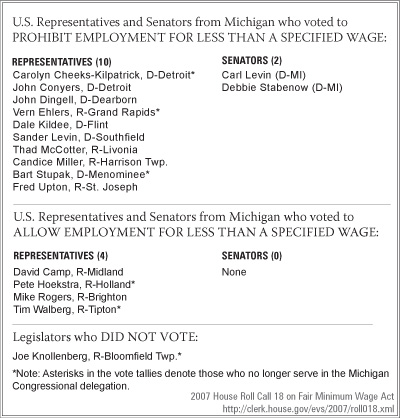