Local government and state workers’ average weekly pay surpassed that of private sector workers in Michigan in 2009, according to an analysis done by the Mackinac Center for Public Policy.

James Hohman, a fiscal policy analyst with the Mackinac Center, did the analysis using data from the U.S. Bureau of Labor and Statistics.

“You might expect wages to decrease given the state’s poor economy. But wage rates have been robust. Indeed, they’ve even increased in this past decade while the state has lost nearly a million jobs. But the growth of Michigan’s public sector employee wages has outpaced those of the private sector,” Hohman wrote in an e-mail.

Charles Owens, state director of the National Federation of Independent Businesses, said state and local government compensation grows even more than the private sector if benefits are included in the equation. Hohman’s analysis just looked at pay.

“I think one of the characteristics of a third-world country is when everyone wants to work for the government because that is where the money is,” Owens said. 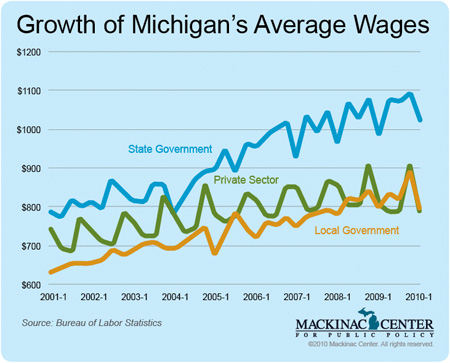