Legislators celebrated a “victory” in September by passing a state employee early retirement scheme that generates upfront savings of just under $140 million (but at the expense of higher costs down the road). This will be used to fill in a gap between their desired 2011 government spending vs. expected revenue (aka “the deficit”). The measure lets politicians get back to the campaign trail, but in the long-term may cost taxpayers more overall, despite some “rosy scenario” projections that claim otherwise.

On the positive side, taxpayers can celebrate another part of the package that requires remaining state employees to kick in an additional 3 percent toward the cost of their future retirement benefits. But only for three years. So powerful are the government employee unions in Lansing that they forced lawmakers to place a 2013 “sunset” on these taxpayer savings.

Unless the next legislature makes the co-pays permanent, that is. Attention, tea partiers looking for accountability yardsticks for newly elected or re-elected candidates who swore on stacks of Constitutions that they are “fiscally conservative.”

The “early out” pension sweetener scheme will give as many as 6,400 state employees richer lifetime benefits if they retire in 2010. Supposedly, the state will only hire two-thirds of that number to replace them at lower starting salaries, thus the short-term savings. We’ll see — pension increases are forever, but politicians’ workforce reduction promises may have a shorter shelf-life.

Actually, these pension increases aren’t forever, but just 21 years on average: That’s the additional life expectancy for state employees eligible for the early-out “sweetener,” assuming they have an average age of 59. Thus the overall package “score” of 21 years of benefits for new state retirees versus just three years of savings for taxpayers.

Fiscal analysts presented optimistic workforce reductions figures suggesting that paying high-seniority state employees more to stop working won’t mean higher costs in the long-term but instead will generate net savings that average out between $19 million and $33 million over 10 years. Even if the higher figure is correct, it saves just $1 out of every $13,636 in the $45 billion annual state budget — practically a rounding error. To get this, taxpayers will have to give all those new government retirees — many in their 50s — a 6.7 percent increase in their monthly pension checks for the rest of their lives.

Most important to lawmakers, however, was the larger but temporary upfront savings that allows them to claim they “balanced” the budget for the new fiscal year that starts Oct. 1 (a claim that would never stand up under private-sector accounting standards.)

The 3 percent increase in retirement contributions from remaining employees really will save money, however — around $82 million each year.[*] For the next three years, anyway. Another provision makes small cuts in the future health benefits of newly hired employees (contrary to popular belief, these could have been trimmed for current retirees also), and a third closes a “double-dipping” scam that allows government workers to retire, start collecting a pension, and also collect a paycheck working for the state as a “contract” employee.

Incidentally, no one should become too exercised over the modest additional co-pay required of remaining state employees (for three years only). Since 2002, they have received across-the-board pay raises 10 times, in addition to regularly scheduled individual employee “longevity” boosts, “step” hikes, plus increases in the amount that taxpayers have been forced to kick in to pay for their health care and other benefits.

Can any other group of workers in this state say the same? Adding injury to insult, yet another 3 percent state employee pay hike went into effect October 1 (because lawmakers in the House and Senate failed to veto it earlier this year). 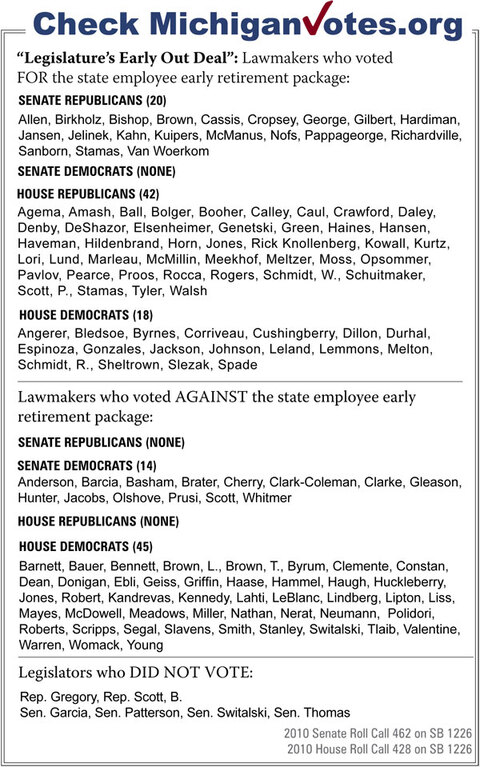 [*]Even this provision’s value was compromised, however: The money will be used to pay retiree health benefits that are not an enforceable obligation, rather than to supplement underfunded pension commitments that really are enforceable.

The original version of this story was posted online on Sept. 29, 2010.