In business, the “Willie Sutton Rule” is a metaphor used to demonstrate that you can best manage your finances by focusing first on your highest-cost activities. The rule is (probably falsely) attributed to the legendary bank robber, who when asked why he went into his line of work, reportedly said, “Because that’s where the money is!” For the state of Michigan’s finances, application of Willie Sutton’s Rule yields one obvious course of action: First focus on public school employee compensation, because that is where the money is.

When comparing Michigan’s cost for this service against what other comparably wealthy states pay, Michigan’s annual price tag looks to be $1 billion too high. This is no small chunk of change for a budget that is estimated to be $1.8 billion out of balance. It is the place to start cutting, given the size of K-12 education relative to the rest of state spending.

State government took $25.2 billion from Michigan taxpayers in fiscal 2009-10 to spend on each of its various programs. Nearly $10.8 billion of that went to K-12 schools, the single largest expenditure of state government. State spending on public schools costs more than a billion dollars on top of the total spending for the next four largest state expenditures combined! (These figures include state tax dollars only and exclude federal funding for state programs.)

About three-quarters of the total spent on K-12 schools was for salaries and benefits paid to public school employees.

Michigan’s teachers have historically been amongst the highest paid teachers in the United States. The most recent data from the U.S. Department of Education ranks us as the 10th highest spending state (excluding the District of Columbia). The 2008-09 school year average salary of $57,327 for Michigan teachers was 6.3 percent above the national average.

But in one significant measure of ability to pay those salaries, Michigan is ranked near the bottom. Gross domestic product per capita is the dollar amount of goods and services produced per person. In November, the U.S. Department of Commerce released a report showing GDP per capita for the 50 states, and Michigan ranked 41st — 10 spots from the basement. These two data points reveal that one of the nation’s poorest states is paying some of the country’s very highest teacher salaries.

This is not a typical result for states that are most similar to Michigan in the GDP per capita rankings. In fact, it is $1 billion out of place. Michigan pays its teachers significantly more than the five states above it and the five states below it in the GDP rankings: 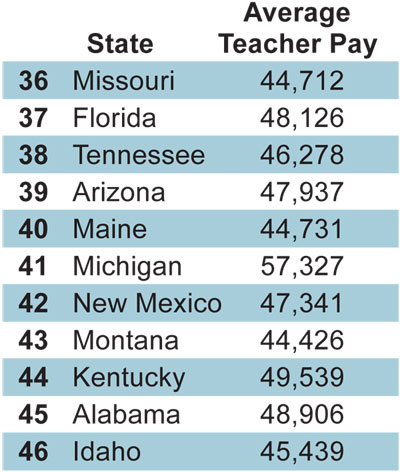 The average annual teacher salary for those 10 other states is $46,744, a difference of $10,584 per teacher less than what Michigan pays. There are approximately 96,000 public school teachers in Michigan. If each were being paid at the average of those other states, the savings to Michigan government’s state budget would exceed $1 billion per year.

But it is important to ask if this cost cutting would be “penny wise and pound foolish.” Even though Michigan taxpayers appear to be paying much more than they can afford for public school teachers, are they at least getting significantly better results?

One often used measure of student performance indicates that the answer is clearly “no.”

Fourth grade reading scores on the National Assessment of Education Progress exam is the metric commonly used to compare the K-12 academic quality between states because it’s often considered a crucial point of academic progression for students. Federal government analysts control between states with different socio-economic characteristics by comparing only students who qualify for free or reduced priced lunches. This is basically a comparison of equally impoverished kids, regardless of the state where they go to school.

Michigan did not meet the national average for this measurement on the 2009 NAEP exam, even though six of the ten states noted previously did. Seven of the ten scored better than Michigan and one (Alabama) was tied with Michigan: 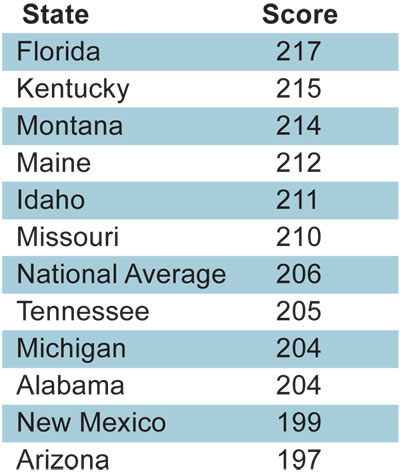 So how might lawmakers apply the Willie Sutton Rule to these facts?

The $1 billion figure is not the end of the story. Teacher salaries may be too high compared to other states, and may constitute the largest portion of school employee costs, but that’s far from the only option.

First, there is the noninstruc-tional staff at public schools: the people who keep buses running, schools cleaned and kids fed. These tasks are often done “in-house” with the district’s unionized employees, but they can also be done by private contractors who often provide the same outcomes for significantly less cost. In one recently reported example, the Novi Community Schools signed a contract with a private custodial company for anticipated annual savings of $3.5 million over a two and a half year period. And the Southfield Public Schools signed a contract estimated to save $14 million to $21 million over a three-year period because it privatized the district’s food, custodial and busing services.

Despite cost-saving opportunities such as these, teacher unions often apply significant pressure on school boards to block these deals from going through, up to and including targeting school board members for defeat at the ballot box. While contracting out for these three services has grown steadily over the last decade, it has still not happened in more than half of the state’s 551 districts. More widespread application could yield at least $100 million in annual savings across Michigan — and perhaps much more than that.

Another option that must be looked at: The total of all benefit packages paid to government employees in Michigan is estimated to be $5.7 billion per year more generous than the benefits given to private-sector workers who pay the taxes that pay for those public employee benefits. Public school employees account for $2.5 billion of this total.

And leaving aside private-sector comparisons, Michigan is also out of step with what the public sector receives in other states. According to the most recent data from the National Center for Education Statistics, Michigan school districts spend more on teacher benefits than most other states. The average school district in America spends 22 percent of its instructional dollars on employee benefits, but in Michigan the figure is 28 percent.

And finally, we must return to the matter of reducing the average teacher salaries so that they align with what is paid by states with comparable GDP rankings. Because salaries can widely vary between districts, a more rational approach may be to reduce each district by a set percentage rather than mandate a specific dollar cut to every district’s average pay.

If cutting teacher salaries still seems a step too far, then consider the case of South Dakota.

With an average annual salary at $38,017 according to the most recent rankings, South Dakota ranks dead last in teacher pay — 40 spots lower than Michigan. But South Dakota’s ability to pay far outstrips Michigan: Its GDP per capita is 4.1 percent higher than the national average, ranking it 18th highest.

What results does South Dakota get for its money?

South Dakota fourth graders eligible for subsidized meals posted a reading score of 209 on their recent NAEP exams. This is above the national average and higher than Michigan’s.

If Michigan paid the South Dakota average wage rate for its teachers, the savings in the K-12 budget would exceed $1.8 billion per year.

Three years ago, Michigan’s personal income and business taxes were raised a combined $1.4 billion as a method of balancing the state budget and supposedly fixing what was ailing state government. Today, those tax rates are still in force, and yet the state is in a new hole — this one is $1.8 billion deep. You can’t find the money to fix that if you apply Willie Sutton’s Rule to the state’s beleaguered private-sector businesses and taxpayers again. They are tapped out.

The savings are in the schools.

The original version of this story was posted online on Jan. 26, 2011.