Republicans scored significant electoral gains last November by promising to rein in runaway spending and put state government’s fiscal house in order. Yet in an early spending vote, the Michigan Legislature — now decisively under GOP control — voted overwhelmingly to increase the cost of a government tourism industry subsidy by 65 percent above what had already been allocated for the year. New GOP Gov. Rick Snyder asked for the increased spending, and the bill awaits his signature.

Despite concerns about the basic fairness of the program, the propriety of spending more money on it, and its overall effectiveness, just seven Republicans voted “no.”

At issue was House Bill 4160, legislation that increased the current year’s cost of the “Pure Michigan” tourism promotion from $15.4 million to $25.4 million. Snyder stated in his first State of the State address that he wanted the higher cost for the program. During the Granholm administration, spending for Pure Michigan and other promotional advertisements had been as high as $33.2 million.

“The people elected us to save money, not spend more,” noted state Rep. Dave Agema of Grandville, one of the House Republicans to vote against the bill.

“I ran on cutting the budget and decreasing the size of government,” said Hooker. “For our first vote to be on more spending — I couldn’t bring myself to do that.”

But Republicans voting “yes” were effusive in their praise of Pure Michigan.

“Our economy is still fighting to rebound, and investing in Pure Michigan has proven to provide an extra bounce,” said state Rep. Wayne Schmidt, R-Traverse City, sponsor of HB 4160.

“Pure Michigan is helping us to reinvent our state by sharing our great opportunities and the positive attributes that are more the reality of living in and visiting our great state,” echoed freshman GOP state Rep. Matt Huuki of Atlantic Mine.

State Rep. Bradford Jacobson, another freshman Republican from Oxford, said the extra spending would provide a “tremendous” boost to the state’s economy, and state Rep. Ken Horn, R-Frankenmuth, stated that he was a “longtime advocate” for Pure Michigan and that $25 million in annual funding was a “good benchmark.”

Some of the legislative support for more funding was based upon a marketing study done by Longwoods International in Toronto. The survey was paid for by Travel Michigan, the tourism promotion agency within the Michigan Economic Development Corporation. The survey purported to show that $2.23 was spent in taxes by tourists in Michigan for every dollar invested in placing Pure Michigan advertising spots on television.

But the legitimacy of that return on investment calculation has come in for criticism due to concerns about the study’s methodology.

An article in the Feb. 4, 2011, edition of the MIRS Capitol Capsule daily newsletter asked: “Is it possible Longwoods International has a vested interest in only giving rosy pictures for these expenditures? Is Longwoods dependent on keeping the travel industry happy?”

MIRS said that these questions had not been asked by state government officials. Noting that Longwoods provides similar marketing surveys for “at least” 25 other tourism boards across the nation, MIRS reported a remarkable similarity to the reports: “If a study has been done that didn’t show a [positive] return on investment from taxpayer-funded advertisement, it has not been made public.”

“Michigan needs a study of Pure Michigan that’s transparent and peer-reviewed,” said the Mackinac Center’s Mike LaFaive to MIRS. “I have yet to see a study bought and paid for by the MEDC that did not comport with its worldview.”

Republican state Rep. Tom McMillin, R-Rochester Hills, an accountant, says he tried numerous times to get the text of the Longwoods survey questions and other data from Travel Michigan so that he could try to independently evaluate the Longwoods claims, but was given nothing.

“The Longwoods ‘study’ (propaganda) is completely bogus and is done by a firm that gets paid by many state governments across the country to produce these non-statistically valid (which the MEDC admits), so-called studies to support higher spending,” said McMillin.

Agema also said the return on investment claims were “questionable.”

And while noting that he likes the Pure Michigan program itself, Rep. Bob Genetski, R-Saugatuck, cast one of the votes against HB 4160 because of concerns about the information coming from the state agency promoting it.

But several Republicans voting for the program were convinced that Longwoods got the details right.

“I’m very happy that the vote passed the House, because I think that the math speaks for itself,” declared freshman GOP Rep. Jon Bumstead of Newaygo. “The return we have seen on our investment in the campaign so far makes it a no-brainer to continue the funding.”

Freshman state Rep. Holly Hughes, R-Montague, echoed the purported effectiveness of the survey itself: “For every dollar spent there is a two dollar-plus return.”

“We are looking for something that can return a benefit back to Michigan, and this is the best way to do it,” noted Greg MacMaster from Kewadin, another House Republican freshman.

And GOP state Sen. John Proos of St. Joseph issued a statement claiming an even greater rate of return than advertised: “For every dollar we invest in Pure Michigan, the state gets back almost three dollars in revenues.”

Meanwhile, McMillin was also concerned about a bigger picture.

“I don’t think we should be picking winners and losers by company, nor by industry,” he said of the $25.4 million that the taxpayers will be spending to subsidize the advertising budget of one industry. “The state isn’t and should not pay for advertising for non-tourist businesses in my district or elsewhere. If this was such a great return, then the industry itself would spend their own money, which they’ve made clear that they will not.”

A previous suggestion to fund Pure Michigan by way of taxing the tourist industry itself failed due to lack of interest from industry advocates, according to Travel Michigan.

The vote in favor of spending the additional $10 million on Pure Michigan was 95-13 in the House of Representatives. The other Republicans to vote against the bill were Rep. Eileen Kowall of White Lake, Rep. Pat Somerville of New Boston, and Rep. Ray Franz of Onekama.

There was no Republican opposition at all in the Michigan Senate, where the additional spending passed on a vote of 35-1.

The Michiganvotes.org roll call vote for HB 4160 is shown below. 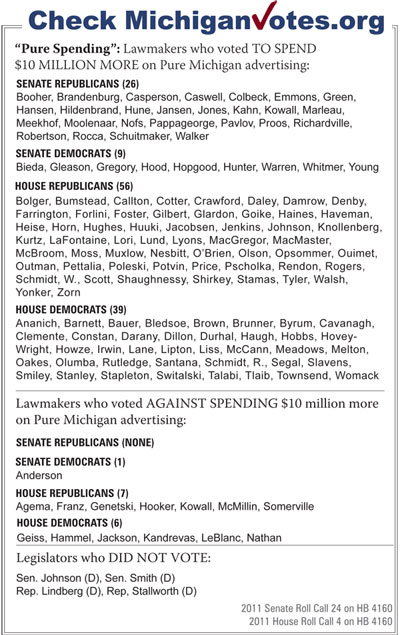 The original version of this story was posted online on Mar. 4, 2011.