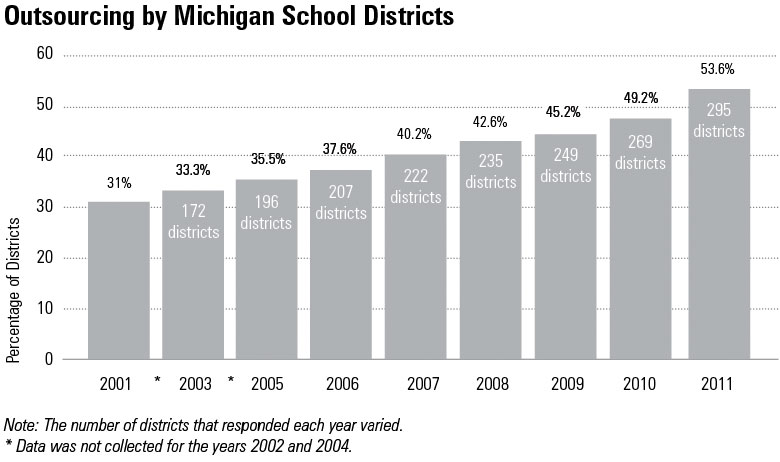 More than half of Michigan’s public school districts now contract out for food, custodial or transportation services, according to new research by Mackinac Center analysts. This is the first time that privatization of noninstructional services has topped the 50 percent mark.

A survey of Michigan’s 550 local school districts found that 295 of them, or 53.6 percent, privatized at least one of the three main noninstructional services. This is a 9.1 percent increase over 2010. Districts began 57 new support service contracts within the past year. The Mackinac Center has tracked the growth of Michigan school privatization since 2001, when roughly 31 percent of school districts privatized at least one support service. Custodial service contracting showed the largest growth last year, with 29 new districts privatizing the service. In just the past six years, 122 districts began contracting out this service.

School boards privatize services for numerous reasons, but financial savings is far and away the most common. Private firms have a clear incentive to provide quality services at a low cost. Privatization can even occur on a small scale: Mason County Central Schools saved $4,500 by subcontracting two cafeteria workers and hiring them through the private intermediary company, PCMI. Districts that take a more expansive approach typically save more. A contract between Woodhaven-Brownstown School District and GCA saved taxpayers more than $1.3 million on the district’s custodial services. Soliciting bids from private vendors often saves money even if districts choose not to contract out, because market competition often pressures school employee unions to offer concessions.

Many school boards have found privatization to be an effective tool for cutting costs without sacrificing service quality. Nearly 93 percent of contracting districts report satisfaction with the services they have received, and relatively few districts (only six within the past year) bring services back in-house following a period of privatization.

Pension and retirement costs often account for a substantial portion of a school’s labor expenditures. Employee leasing firms, such as PCMI and PESG, often provide savings in these areas by offering benefit packages closer to those found in the private sector. Retirement benefits alone cost public school employers nearly 25 percent of an employee’s salary. Ubly Community Schools, which contracts for support staff in multiple areas, saves a minimum of 8 percent per employee contracted. Fulton Schools realizes savings of 10 percent per employee on its custodial contract with PCMI.

Numerous districts have also found savings through sharing one or more services, also known as inter-district contracting. For example, Saginaw Township Community Schools provides food services both to Swan Valley School District and to nearby parochial schools. Both districts indicated they are satisfied with this arrangement. Over 100 of Michigan’s school districts share at least some portion of their food services — most commonly, a single food service director divides time between two or three districts. More than 250 districts also share support services through their intermediate school districts, with business, technology and special education services among the most commonly shared. Some small rural districts, such as those in Huron County, have no superintendent of their own and rely on the intermediate school district superintendent and staff for administration.

The steady, significant growth of privatization — and the associated savings — caught the eyes of Michigan legislators, who are now considering House Bill 4306. Introduced by Rep. Dave Agema, R-Grandville, this bill would mandate competitive bidding for major noninstructional services. Already, several districts have begun bidding out services in order to qualify for Gov. Rick Snyder’s “best practices” funding, which offers an additional $100 per pupil to any district that meets four out of five criteria. One of these criteria is the solicitation of competitive, private-sector bids for support services.

Privatization remains an important option for school districts looking to reduce bureaucracy and save taxpayer dollars. School employee unions frequently oppose competitive bidding because it denies them members and dues, but school boards and administrators have a fiscal responsibility to seek the best and most efficient service providers for our schools. Increasingly, privatization has allowed them to do just that.

James Hohman is assistant director of fiscal policy at the Mackinac Center for Public Policy, where Josiah Kollmeyer is a 2011 research intern. Permission to reprint in whole or in part is hereby granted, provided that the authors and the Center are properly cited.