A powerful new report from the Florida-based Foundation for Government Accountability suggests that cost projections relied on by Gov. Rick Snyder in recommending that Michigan go along with an optional-for-states Obamacare Medicaid expansion may be far too low.

If correct, this could potentially lead to future state budget crises here for as far as the eye can see.

Figures generated by the Snyder administration claim the expansion will help Michigan's budget in the short term because it allows the state to shift some current state spending onto the federal budget. The governor recognizes these benefits will be temporary, and so he wants to put half the projected savings of $575 million through 2020 into a "lock box," which would be used to cover higher state spending triggered by the expansion down the road.

How much higher that spending will be depends on assumptions about the number of new people covered by the expansion. State bureaucrats estimate this at around 470,000 in 2020, which will increase state costs by some $300 million a year (itself a suspect figure because it depends on the deficit-burdened federal government not reneging on its promised share of the costs). If these increased enrollment estimates hold up, the temporary savings deposited in that “lock box” would supposedly cover all the state’s increased costs through 2031.

But what if the projections are too low? The experiences of other states that have expanded their own Medicaid programs suggest they may be greatly understated.

One of the past expansions the Foundation for Government Accountability report examines occurred in Arizona. The report includes these charts (plus many others) showing the original projections vs. what really happened: 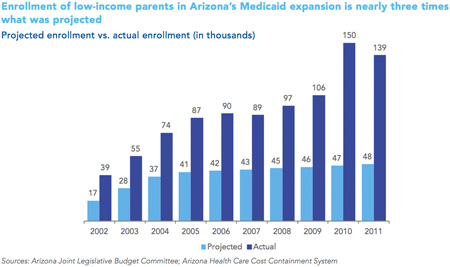 Like the one proposed for Michigan, the Arizona expansion covered two separate populations, parents with children and childless adults. If Michigan does not expand the program, everyone in the first group (referenced in the chart above) will instead get a "real" health insurance policy from a private insurer through the Obamacare exchange at essentially no cost to themselves. Among other things, that private insurance alternative promises better health outcomes for those beneficiaries compared to Medicaid. 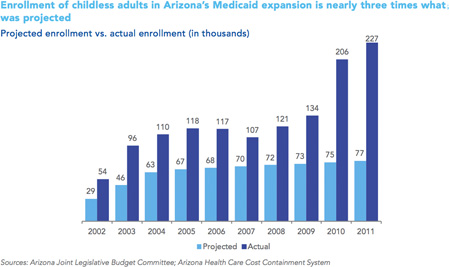 The numbers in the second chart, "Childless Adults" (above) show a similar pattern. The state was eventually forced to limit the program due to the massively higher-than-projected costs:

Michigan policymakers should be extremely skeptical of projections generated by bureaucrats and special interests that have strong incentives to see the Obamacare-driven Medicaid expansion take place here.

The Foundation for Government Accountability report contains a great deal of additional information in a form that makes it accessible to both policymakers and laypeople.

Michigan Company, Lauded As A Face Of Green Energy in 2012, Now Defunct