Though the Highland Park School District spent $19,634 per pupil in 2010-11, which was the highest in the state, district schools were so mismanaged that they had rodents in the classrooms, holes in the ceilings and walls, and horrendous filth in the bathrooms.

"I [saw] it in the media center," DeCarlos, a junior at Highland Park Community High School, said of a mouse he saw running along the floor from a nearby room.

"You'd just do your work and you'd just see something just run across," he said. 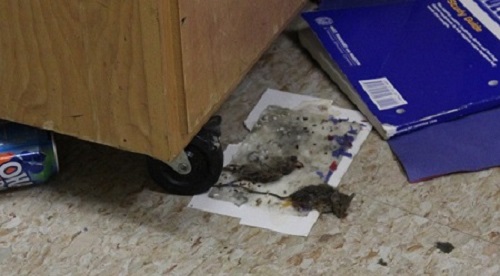 I have been visiting Highland Park schools this year to watch as the district transitions from a conventional district to a charter district — one of the first two public school districts in Michigan to make such a change. 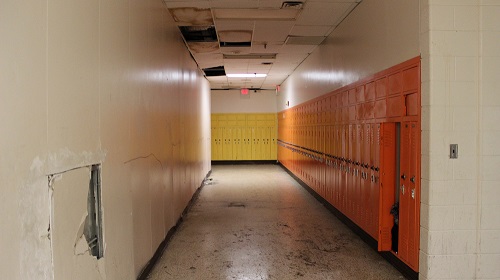 In 2012, a financial review team appointed by Gov. Rick Snyder declared that the Highland Park school district was in a financial emergency. The district had spent millions more than it had received in revenue.

There were accusations of mismanagement. Highland Park board member Robert Davis was charged with improperly spending more than $170,000 of school district money, on clothing, hotels and restaurant tabs, among other things.

Ultimately, the state gave Highland Park more than $8 million in extra funding so that it could pay its bills.

This fall, the district reopened as a charter district. School administrators who work for The Leona Group, the charter management company that is running the schools, say that they have spent hundreds of thousands of dollars to try to clean and fix up the facilities.

Leona replaced some toilets at Highland Park schools, but not those on school floors that aren't being used. The remaining toilets betray just how far things had declined in Highland Park schools under conventional district management. The toilet bowls are caked brown.

Ceiling tiles are missing in many of the buildings. One hallway wall in the high school is partially caved in. The security guard showing me around the school building said that the wall was damaged during a fight last year.

"This stuff didn't just get like this. It's been like this," said Valecia Ashford, a teacher who has been with the district for 37 years.

When I asked her how teachers and parents allowed students to attend school in these conditions, Ashford responded: "I thought about my colleagues. Always placed them in very high regard. But going into some of these rooms, and looking at the filth that was in those rooms ... my whole attitude changed toward them."

Prior to being charterized, some district officials were blaming state legislators for a lack of funding. The Michigan PTA President also called for more money. At the same time, the district was spending nearly $20,000 per student — well over a quarter of a million per classroom — while the district shed nearly half of its students

The previous teachers' contract shows that the district paid 100 percent of health care premiums while granting special favors for the union, like handing over district financial information, setting up an automatic payroll deduction for dues, and allowed the local president to spend half of his or her time working exclusively on union business.

No Highland Park District school board member responded to a request for comment as to how the district could have spent so much while leaving the facilities in such disrepair.