Michigan suffered a unique economic downturn in the 73 months of the 2001 to 2007 economic expansion. But since then, Michigan has rebounded better than national averages.

A look at the employment shows that the recovery has been substantial, better than average, and only partly caused by the resurgence of the auto industry.

This chart shows the payroll employment in Michigan compared to the United States. The numbers are normed to the recessionary trough in June 2009 to show performance before and after the recession. 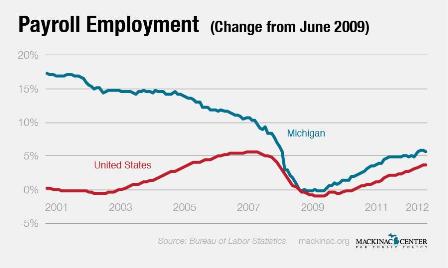 The following recession hit Michigan proportionally harder, with the state shedding 9.6 percent more of its jobs while the U.S. largely lost all of the gains it made in the 2001 to 2007 expansion.

Since the end of the recession Michigan’s recovery outpaced the national recovery with a 5.7 percent increase in its payrolls compared to the U.S’s 3.7 percent increase. It cannot be understated that this is the first economic expansion that Michigan has experienced in a decade.

To put that in perspective, the Michigan Senate Fiscal Agency published a report at that time responding to the panic of rising gas prices, which had spiked from $1.38 per gallon earlier in the year to the unheard of price of $2.08 per gallon.

The auto industry was a factor in the different trends between Michigan and the rest of the country. Jobs in auto and parts manufacturing took huge hits in Michigan and in the rest of the country. Michigan lost 36.3 percent of its auto and parts jobs in the 2001 to 2007 national expansion compared to a 17.8 percent drop in the U.S. as a whole. The state lost a further 42.9 percent of its jobs in the recession and has since replaced over 60 percent of the jobs lost in the recession. This recovery is also slightly better than the national average.

Lest we put all of the Michigan’s fortunes on this one industry, Michigan’s manufacturing growth is more substantial outside of the autos. Michigan’s non-auto manufacturing jobs are nearly to the point where they’ve recovered the substantial losses of the recession. And the recovery is much better than the national trends. 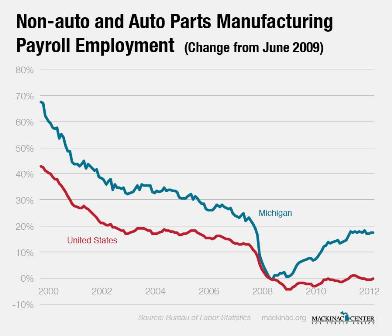 Michigan’s recovery goes beyond manufacturing, either auto or otherwise. An analysis by University of Michigan economist Don Grimes shows that Michigan’s been doing much better than you would expect, given its mix of industries and the national trends of those industries.

There’s still much to recover in Michigan, but the state’s recovery is robust. You also can’t simply point to the auto industry to explain it.

Despite Popular Thinking, Michigan Economy Is Not Determined By Automotive Industry

How Much of Michigan's Troubles Can Be Blamed on the Auto Industry?

Debate: Could Union Costs Be Pricing Michigan Out of Auto Jobs?

Did the Auto Bailout Really Save One Million Jobs?