It’s an election year, which means many Michigan politicians want to be seen letting taxpayers keep more of their own money.

As they proceed, however, they should take a long view of measures that aren’t just politically popular, but will have positive effects on future employment and economic growth in this state.

Democrats and many Republicans want to expand exemptions on pension income that were restricted as part of a 2011 tax overhaul, and expand homestead property tax and child credits that also were scaled back. The main component of that 2011 tax reform was replacing the Michigan Business Tax with a much simpler and less burdensome tax on firms' earnings, in practice ending taxation for most small businesses and imposing a flat rate on larger corporations.

While it has potentially unfortunate side effects (like creating incentives for retirees to move to a state with no individual income tax), scaling back exemptions on pension income made the system more fair. There's no logical reason why 401(k) or IRA withdrawals should be taxed while income from conventional pensions is exempt. Not to mention forcing struggling young families to pay higher rates so older citizens can pay less. And while property tax credits and dependent child credits are politically popular, they do little or nothing to help increase employment and the state economy.

In contrast, broad-based cuts in income tax rates do help create jobs and expand Michigan's economy. That's the goal of a bill sponsored by Sen. Jack Brandenburg, R-Harrison Township, which is pending on the Senate floor.

Related to all this, Michigan's constitution prohibits politicians from imposing a graduated income tax. In other words, only a flat tax is permitted. Nevertheless, this principle has been eroded by exemptions that have the effect of creating a graduated tax system.

Indeed, according to the Michigan Department of Treasury, the system has become quite progressive. Most individuals don't start paying income tax until their income is around $22,000, mostly because of property tax rebates, home heating credits and other exemptions. (See chart nearby, but note that it is only updated through 2011, before that year's tax changes.) 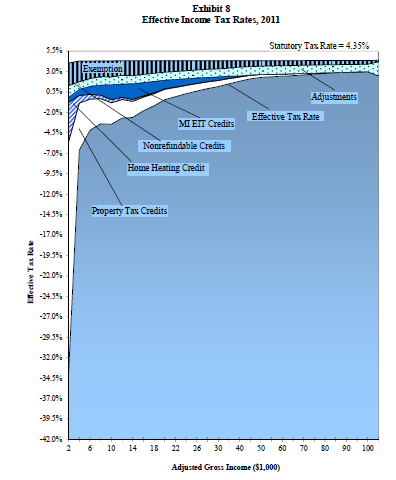 Setting aside the constitutional issue, graduated taxes are not an invalid political choice, whether one agrees with it.

But economists agree that the most efficient method of taxation with the least number of unintended consequences is to spread as low a rate across as wide a base as possible. This is the direction Michigan tax policy should flow.