The late Illinois politician Everett Dirksen once said, "A billion here, a billion there, pretty soon you're talking real money."

Though that was in the 1960s, a billion dollars is still “real money” today. But it is one of those numbers thrown around so much in the political realm that it is hard for people to grasp.

It is difficult to avoid numbers when talking about underfunded pension systems, but here are some illustrations that will hopefully help readers grasp the enormity of the problem in Michigan.

1. The school retirement system (MPSERS) is underfunded $25.8 billion – the highest it has ever been.

That is the amount of money politicians have promised for which they have not put aside funds. The amount is so large that an extra $100 million kicked into the pot recently scarcely made a dent, fixing a mere 0.4 percent of the problem. 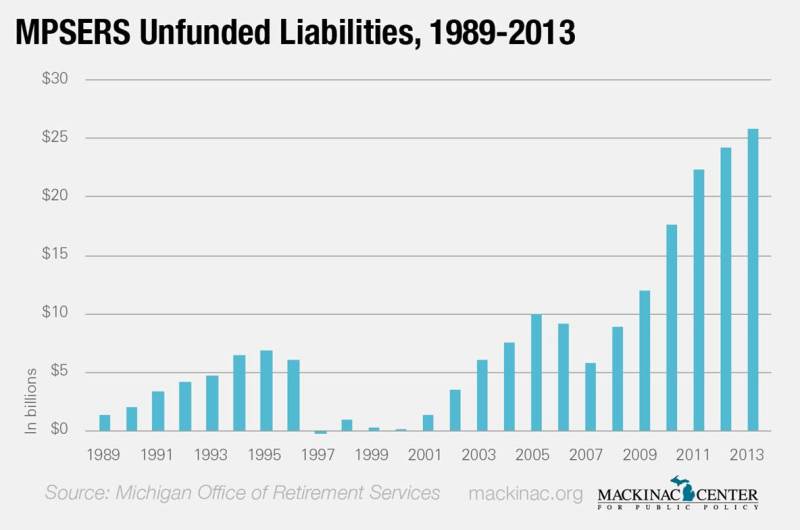 2. Teachers and other school employees are likely the state’s largest creditors.

The $25.8 billion owed to them is roughly 13 times more debt than is in the state’s general obligation bonds, which includes things like state voter-approved borrowing for the Clean Michigan Initiative. 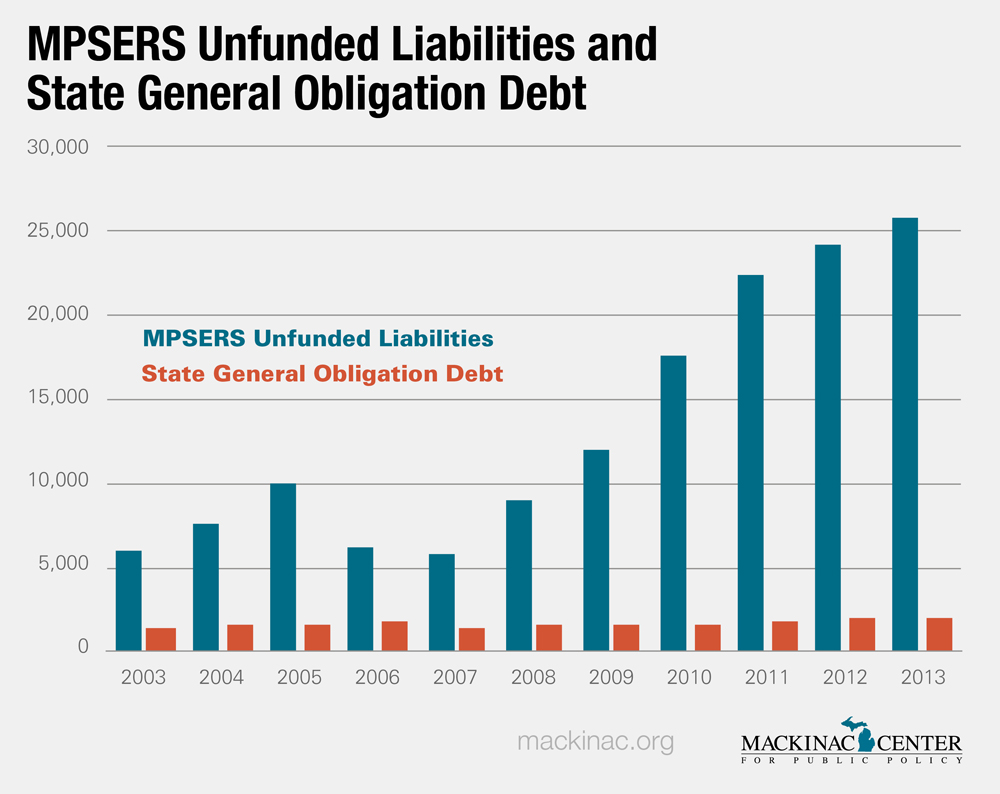 3. The annual required contributions for the school system have doubled in the past few years.

The ARC payments for the school system are the amount required just to keep up with funding for current workers retiring (it is often ignored by politicians, which is why liabilities are so high). This amount increased from $989 million in 2009 to $1.9 billion in 2013. The latest actuarial valuation indicates that this will rise to $2.3 billion in 2016. This excludes the value of retiree health care benefits and attempting to prefund those. 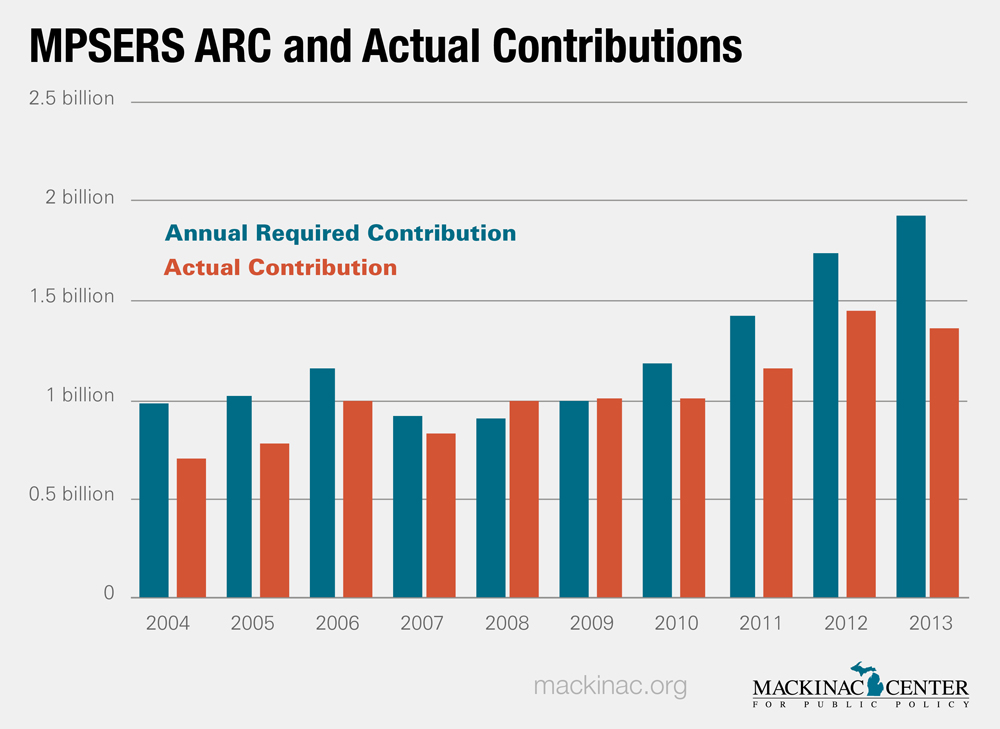 4. Thirty (30) percent of school employee payroll costs are devoted to the pension system – up from 12 percent a decade ago.

In order to fund the system, the state charges member districts a percentage of payroll to cover retirement benefits and retiree health care. These rates increased from 12 percent of payroll in 2001 to 30 percent today. 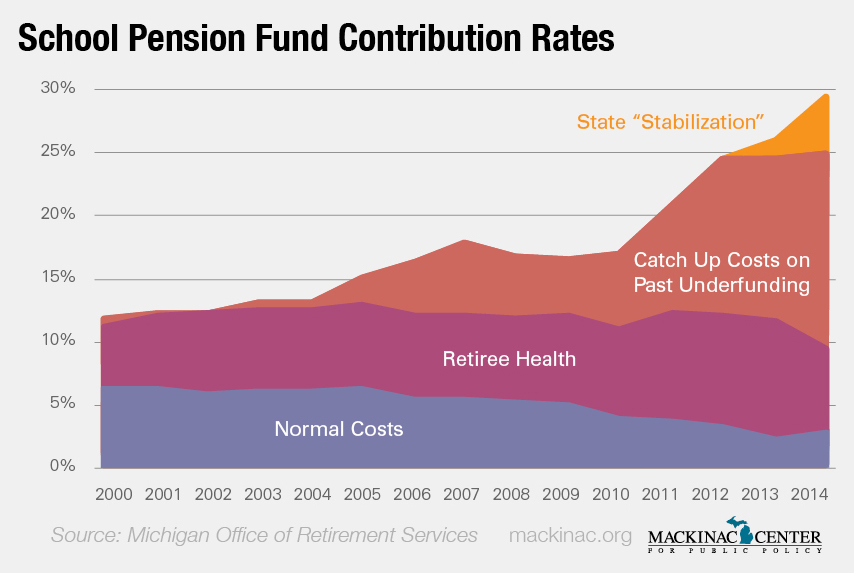 5. Eighty-seven (87) percent of what the state, school districts and current employees spend on pensions goes to catch up on past underfunding.

Only 13 percent of current spending is for the retirement costs of current employees. 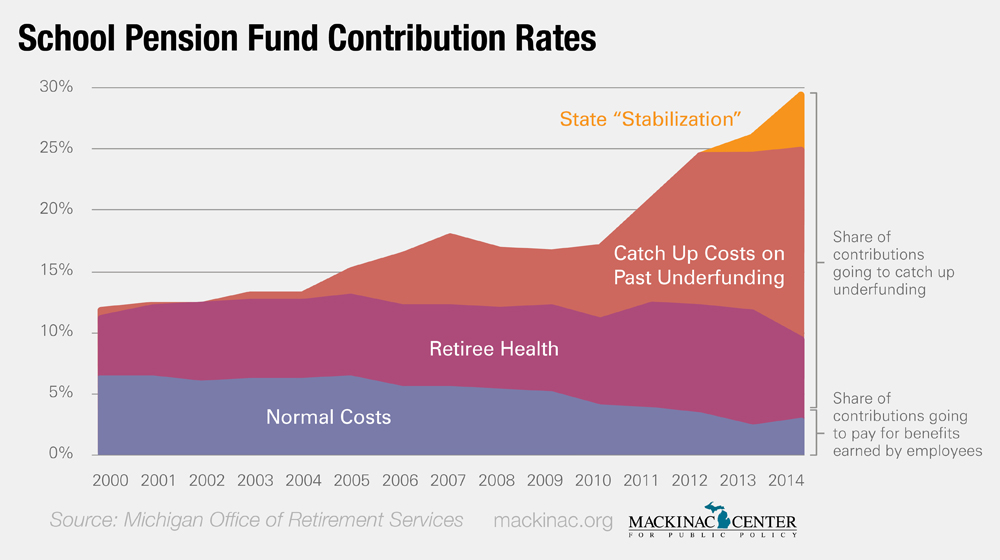 6. The state has continually assumed more employees would enter the system while actual employment has continued to decline.

The teacher pension system assumes annual payroll growth of 3.5 percent. Total payroll of MPSERS members fell by 14 percent over the past decade. 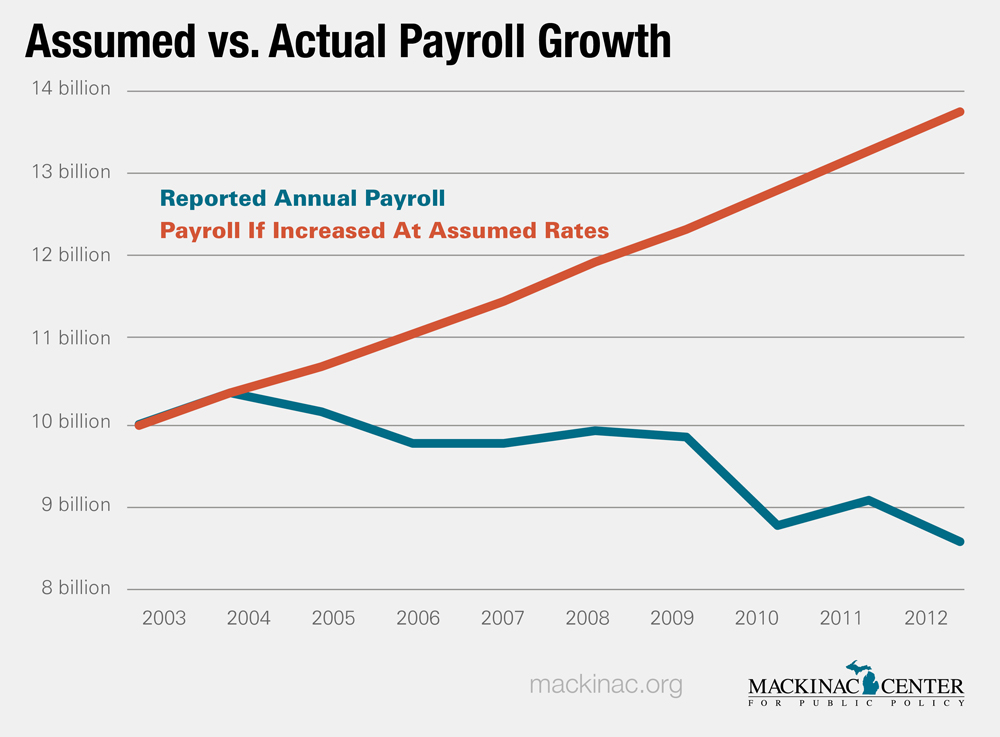 An evaluation of the Comprehensive Annual Financial Reports (CAFR) for all Michigan counties and its 100 largest cities showed that only a handful of pension systems were fully funded. Only one county and seven cities had assets higher than liabilities. 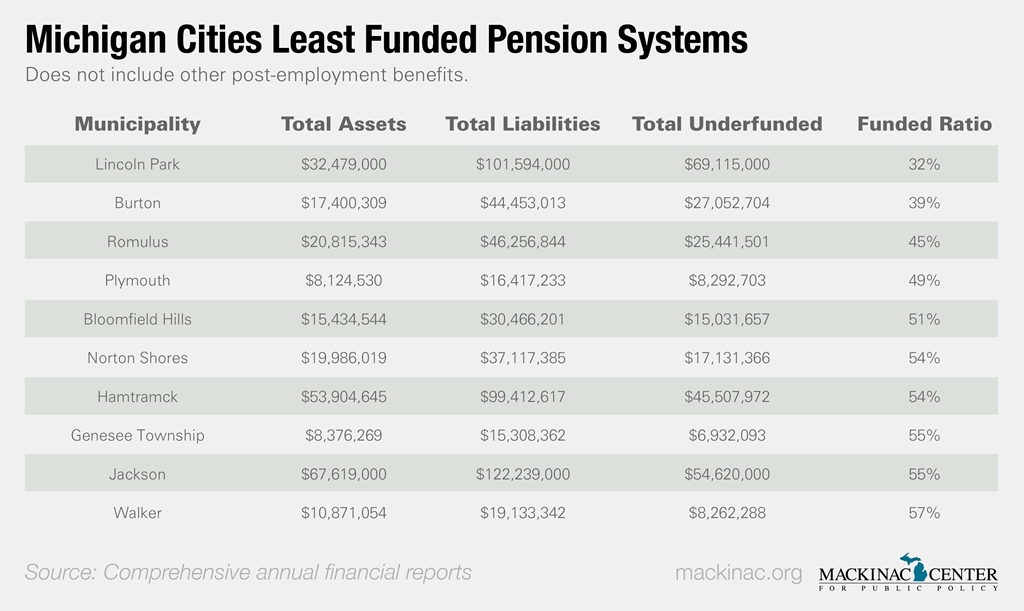 8. The average city in Michigan is funded around 67 percent.

Of the 100 largest cities and townships in the state, only 67 cents on the dollar has been put away. When Detroit declared bankruptcy, its pension systems were estimated to be at the very least 65 percent funded.

9. The average county in Michigan is funded around 74 percent.

Of Michigan’s 83 counties, unfunded liabilities are equal to more than a quarter of promised benefits.

10. Four Michigan cities have a funded ratio below 50 percent.

The amount of liabilities in pension systems at the state, county and local levels is a rapidly increasing problem. The city of Detroit is an extreme example, but many cities around the state are in even worse shape, threatening bankruptcy for those communities.

These liabilities crowd out funding for public safety and roads. There are several things that would help fix the problem, but until taxpayers and politicians make the issue a priority, it will continue to get worse.