The following is a longer version of an article that originally appeared in October 2006.

Election season is upon us, and there’s no shortage of polls telling us what we think. But judging the accuracy of all these numbers requires a basic understanding of the science of polling.

The first known opinion poll was a presidential "straw vote" conducted by the Harrisburg Pennsylvanian in 1824. The newspaper simply surveyed 500 or so residents of Wilmington, Del., without regard to demographics. The results showed Andrew Jackson leading John Quincy Adams by 66 percent to 33 percent.[1] (William Crawford, secretary of the treasury, and Henry Clay, speaker of the U.S. House of Representatives, also were candidates.) 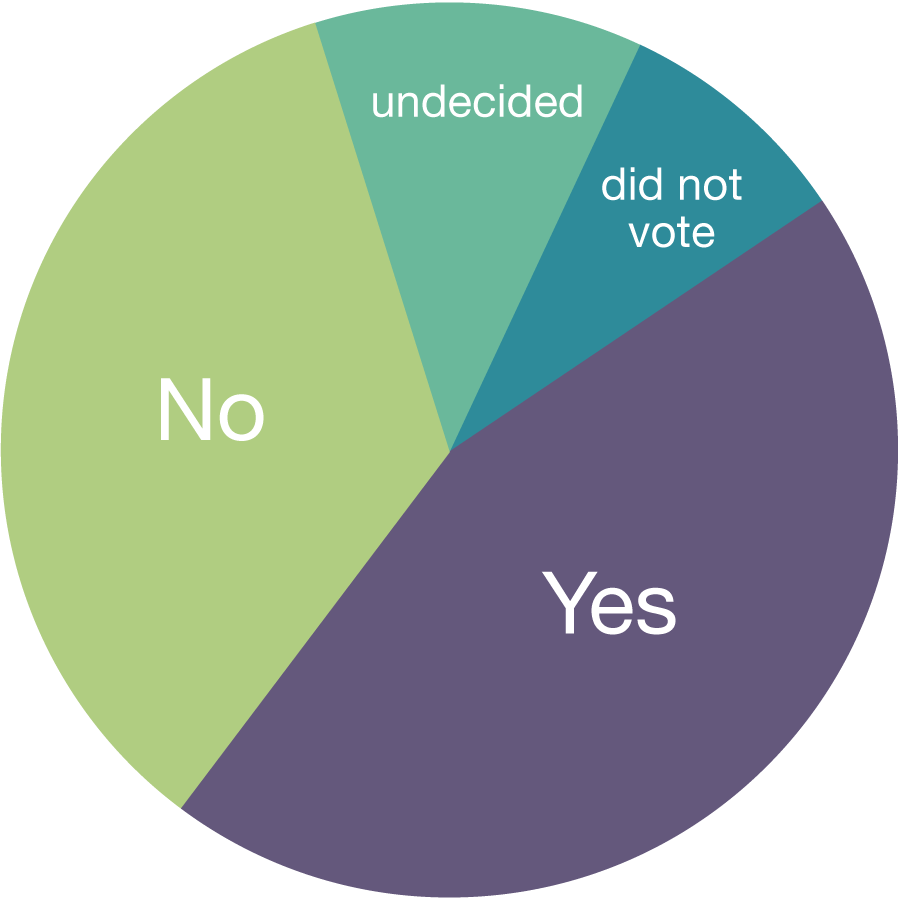 The poll accurately predicted the outcome of the popular vote, but none of the candidates actually won a majority of the electoral vote. Consequently, the election was decided by the House of Representatives, which chose Adams.[2]

Election polling was popularized in the 20th century by the Literary Digest, a weekly magazine published by Funk and Wagnalls. Beginning with the re-election of Woodrow Wilson in 1916, the Digest correctly predicted the result of every presidential campaign until 1936. Its polling consisted of mailing millions of postcard "ballots" nationwide (along with a subscription form) and tallying the responses. Many considered the Digest poll to be unassailable.

So it seemed until 1936, when the Digest forecast a landslide win by Alfred Landon over Franklin Roosevelt.[3] In contrast, a young George Gallup predicted a Roosevelt victory based on a "representative sample" of 50,000 people — that is, a group that resembled the population at large. Yet his prediction was widely ridiculed as naive.[4]

In hindsight, the Digest’s error is easy to spot: Its mailing list was comprised of households with telephones, cars and magazine subscriptions. In the midst of the Great Depression, those with money to spare for such relative luxuries hardly represented the voters who would favor Roosevelt and his New Deal.

The Literary Digest folded soon after Roosevelt’s election. What was true then is true today: A flawed sample cannot be corrected simply by increasing the number of respondents.

The Gallup organization suffered its own embarrassment in 1948, when it predicted a victory by Thomas Dewey over Harry Truman. Gallup claimed the error resulted from ending his polling three weeks before Election Day. Others faulted his use of "quota sampling," by which respondents were targeted based on gender, age, race and income. This type of sampling can be useful when comparing differences of opinion between specific demographic groups; it is not accurate, however, for estimating how many people within an entire population hold a particular viewpoint.

The use of quota sampling for elections was largely replaced after 1948 by "random sampling," in which all segments of the population have a reasonably equal chance of being surveyed.

Whereas the Literary Digest used postcards and Gallup posed questions face-to-face, most polls today are conducted by telephone. Calls are typically made by "random digit dialing," the process by which computers generate wireline telephone numbers. This method improves the chances of reaching households with unlisted numbers or new service. But the substitution of cell phones for traditional land lines among some segments of the population has lately raised questions about the ability of random digit dialing to produce an unbiased sample.

To achieve more accurate findings, pollsters adjust their results to more closely reflect key demographic characteristics of the overall population. For example, if a survey is written to measure political views, and if 40 percent of all registered voters at the time of the survey are Democrats, the results will generally be more reflective of the entire population if the sample is "weighted" so that Democrats effectively make up 40 percent of the responses to any given question.

Survey results based on samples that have been heavily weighted are generally considered less reliable. Consequently, it is helpful to know how a sample has been weighted in order to judge the precision of the poll.

Most polls are reported with their "margin of error." This is an estimate of the extent to which the survey results would vary if the same poll were repeated multiple times. If a pollster reports that 75 percent of voters are dissatisfied with Congress, a ±3 percent margin of error usually means that there is a 95 percent chance that the true measure of voter satisfaction falls between 72 percent and 78 percent.

The wording of questions is crucial to interpreting poll results. Individual responses often depend on the way in which survey questions are posed. The three questions below, developed by researchers at Michigan State University, demonstrate how wording can affect poll results.[5]

From a budgetary standpoint, expenditures of $23,700 per prisoner and $1.3 billion in total are equivalent. Yet public opinion about the appropriateness of each figure varies remarkably, as does the result when no figure is cited. 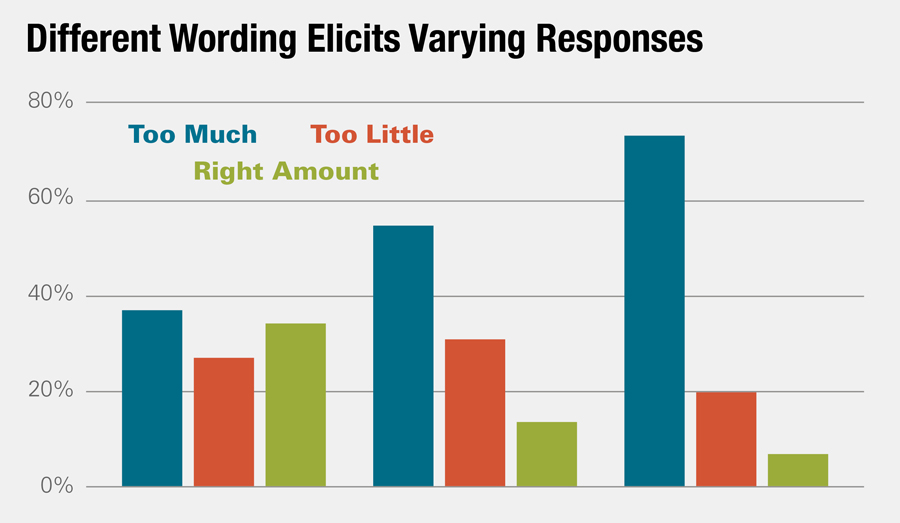 Similarly, it is helpful to know the range of responses to understand fully the poll results. For example, in the table of hypothetical data below, it could be accurately reported that 45 percent of Americans have an unfavorable impression of the Federal Emergency Management Agency. In the absence of information about the range of responses, readers could easily conclude that 55 percent of Americans have a favorable opinion. An entirely different impression would be conveyed were it reported that less than one in five say their impression of FEMA is favorable.

Ideally, all of a survey’s wording and responses will be made available to the public when the survey results are published. When survey language is not made public, however, it is useful to know who sponsored the poll to help judge the survey’s reliability.

Survey results may also be affected by "response bias," in which respondents’ answers do not reflect their actual beliefs. This can occur for a variety of reasons:

When conducted properly and understood correctly, polls provide a useful snapshot of popular opinion. If manipulated or misinterpreted, polls can distort reality. Voters would do well to evaluate polls based on the following 10 questions.[6]

[3] The U.S. Survey Course on the Web, "Landon in a Landslide: The Poll That Changed Polling," City University of New York and George Mason University. Available on World Wide Web: http://historymatters.gmu.edu/d/5168.

[5] Institute for Public Policy and Social Research, 1997. State of the State Survey, "Attitudes Toward Crime and Criminal Justice: What You Find Depends on What You Ask," No. 97-20, Michigan State University, East Lansing, Mich. Available on World Wide Web: http://ippsr.msu.edu/Publications/bp9720.pdf.