In 2014, Detroit retirees learned the consequences of waiting too long to reform pensions. Retirees took a $1.3 billion hit to their pensions because of a mismanaged and underfunded system. Michigan taxpayers had to pay $200 million to clean up the problem.

But other municipalities around Michigan have underfunded systems, too, and only some are taking concrete steps to solve the problem.

Michigan Capitol Confidential looked at Michigan’s 100 largest cities and found that 80 of the systems were underfunded. Combined, these 80 cities and townships have only saved 62 percent of what they will need to pay the pensions of future retirees. Even after Detroit's recent bankruptcy settlement, their total unfunded liability equaled $4.6 billion.

Five cities contributed the most to this liability, responsible for over half the total. Detroit comes in at the top of the list with a $1.6 billion liability. Flint’s unfunded liability is $285 million, Lansing’s is $246 million, Warren’s is $207 million and Sterling Heights' is $166 million. The total unfunded liability of these four cities is $2.5 billion.

Of the 20 cities that are not considered underfunded, most (14) offer a defined contribution retirement plan instead of a defined benefit pension plan. 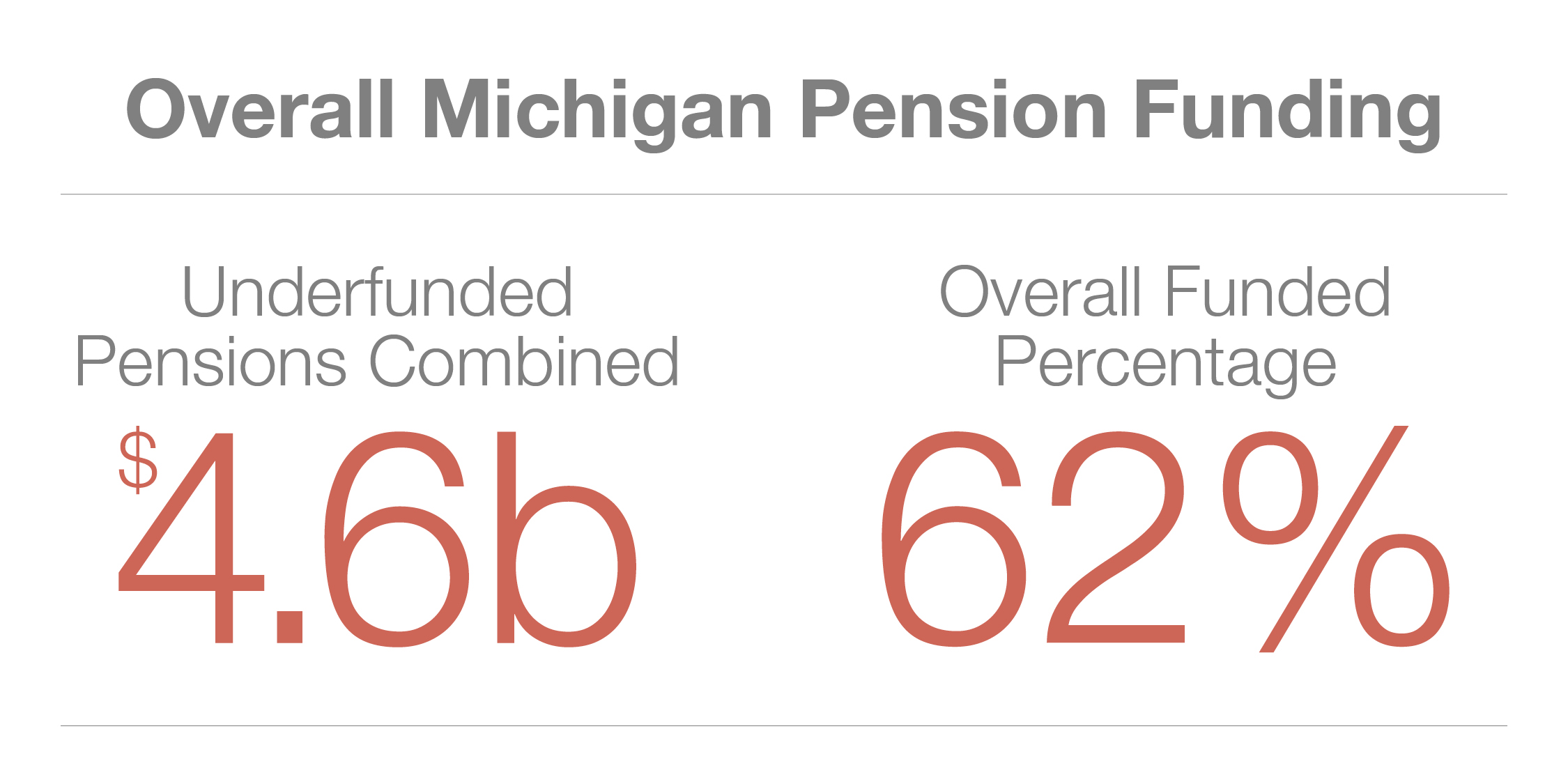 Rochester Hills, the 21st-largest city in Michigan, has never offered a defined benefit pension plan to its employees. Since its incorporation in 1984, the city has never had any retiree liabilities and Mayor Bryan Barnett says this has allowed it to fund other priorities.

"Maintaining a defined contribution program has allowed us the financial freedom to invest in our infrastructure as well as quality-of-life components our residents enjoy,” Barnett said. “Strong conservative fiscal management has positioned our city in the top 5 percent for financial stability in the state and certainly is one of the reasons we've been named one of the top ten places to live in America."

Pension problems vary in severity across Michigan. Grand Rapids, the state’s second-largest city, closed its plan to new employees in 2014 and is now 97 percent funded.

Ann Arbor and Dearborn are funded at 88 and 89 percent, respectively. Ann Arbor has a liability of $65 million while Dearborn is underfunded by $20 million.

Some cities are much worse off. Taylor, Saginaw and East Lansing are funded at less than 60 percent, meaning they’ve only put aside a bit more than half of what will be needed.

Lincoln Park, the 45th-largest city in Michigan, has the lowest funded percentage. Its defined benefit plan is 21 percent funded and has a $93 million unfunded liability. Until late 2015, Lincoln Park had an emergency manager to resolve its financial crisis.

“Our annual contributions to our pension and OPEB (Other Post Employment Benefits) costs are steadily climbing and consuming more and more of our limited resources,” Freed said. “At this point, it is unsustainable without real reform. Unfunded liabilities are the greatest issue the city of Port Huron faces and if left unaddressed it will affect our ability to provide services to our residents.”

Port Huron’s pension system is 60 percent funded, and it has a $55 million liability. There are 335 people currently collecting benefits, and 275 more who can collect in the future.