Officials estimate that to pay the benefits promised to current and future school retirees, there needs to be $67.7 billion invested in the pension fund right now. But persistent underfunding means the actual amount is just $41.0 billion for the Michigan Public Schools Employees Retirement System (MPSERS). This leaves the system only 60.5 percent funded — the largest shortfall since it began. Unfunded liabilities increased $9.1 billion over the past five years. The problem is not limited to schools, though: Pension funds at Michigan’s counties and 100 largest cities have a combined shortfall of $6.7 billion. 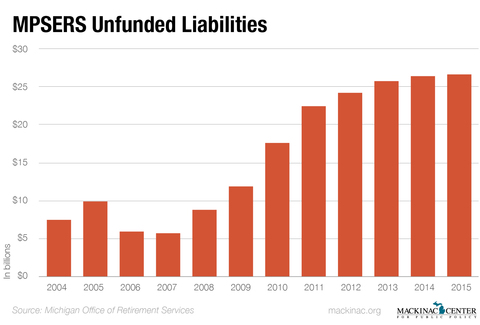 The “ARC” is the minimum contribution needed each year to cover new pension promises and keep up with the state's plan to gradually catch up on past underfunding. It was $1.2 billion in 2010, but continued underfunding drove the figure up to $2.2 billion in 2015, which was also the sixth year in a row the state did not meet the requirement. (It actually paid in $1.97 billion.) Increased spending on pensions crowds out other state spending and pressures lawmakers to increase taxes. 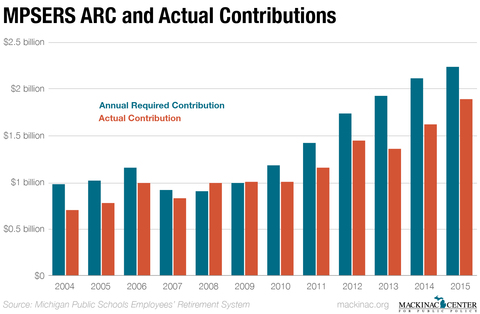 3. For over a decade, Michigan has assumed school payrolls would increase by 3.5 percent per year, but it has decreased 18 percent in the past decade.

Determining how much needs to be invested in pension funds each year requires making certain assumptions about the future, and getting these wrong increases underfunding. One of the current assumptions is that school payrolls will grow, something that hasn't happened for years. In 2005, school payrolls totaled $10.2 billion; in 2015, payroll was down to $8.4 billion. 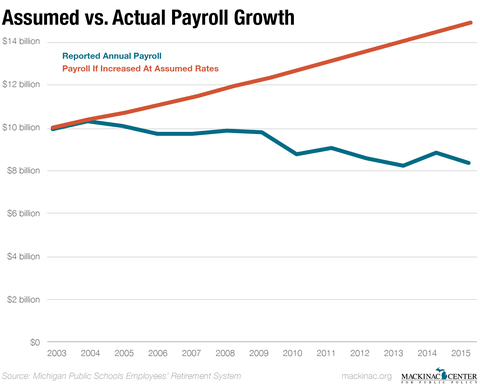 4. More than one-third (36 percent) of Michigan school payrolls are absorbed by the pension system.

Just five years ago, this percentage was between 19 and 21 percent, depending on when the employee was hired. 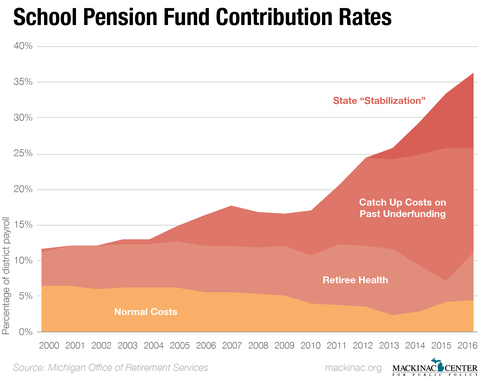 5. Only 13 percent of the expenses schools incur for employee pensions each year goes to pay benefits earned in that year. The rest goes to catching up on past underfunding.

This means that 87 percent goes toward catching up on unfunded liabilities — and it’s still not enough. As the chart below shows, catching up on underfunding crowds out spending on normal costs and health care costs. ("Normal costs" refers to the money needed to cover the obligations an employer incurred for its workers during the year.) 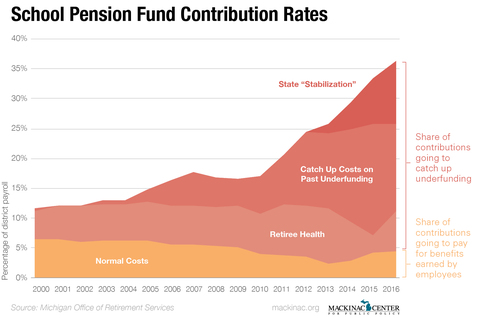 6. In 2000, the pension system consumed 12.2 percent of school payrolls, most of which covered new pension credits earned in that year. Today the system swallows 36 percent of payrolls.

Despite a 200 percent increase in pension contributions over 16 years, a far smaller portion of this money goes to cover benefits earned by active employees in the current year.

The pension funds of the state’s 100 largest cities and townships only hold 69 percent of what they should have to cover future benefits. That’s actually up from 67 percent in 2014. The slight increase may be associated with the fact that some cities have closed their defined benefit plan to new employees, who get 401(k) contributions instead. It might also be associated with enrolling new hires in a less generous defined benefit plan. These 100 cities combined owe $4.2 billion more than they have set aside.

8. Only one of the 100 largest cities with an open defined benefit plan is fully funded.

9. The average Michigan county has just 76 percent of the amount needed in its pension fund.

This is up 2 percentage points from 2014, when they were just 74 percent funded, on average. A number of counties have recently closed their defined benefit plan to new hires, which helps limit the increase in unfunded liabilities. Altogether, pension funds in Michigan’s 83 counties are $2.5 billion short of the amount they should have to pay their promises to retirees.

10. Ten counties have closed their defined benefit plan and are 94 percent funded.

The prudent actions of leaders in these 10 counties have contributed to their taxpayers being on the hook for far less in unfunded liabilities than they might have been. Macomb has the second-largest county workforce in the state (5,145) and closed its defined benefit plan to new hires in 2015. Genesee will complete its shift to defined contribution plans by November 20, 2017. Many smaller counties are making a shift as well.