While a majority of Michigan’s local public school districts do not report privatizing noninstructional services — such as transportation, student meals and custodians — the growing minority who do privatize these services often report substantial savings. Contracting out custodial services has yielded some of the biggest winners. Recent examples reveal that the Muskegon Reeths-Puffer district signed a contract to save $480,000 annually — about $114 per student; Avondale in Auburn Hills plans to save $490,000 annually — $128 per pupil; and the Jackson Public Schools would trim their annual custodial costs by $1.3 million, or $193 per pupil.

For 2006, just 63 of 552 local school districts reported private contracts for custodial services. Yet, if all of the other districts took the privatization plunge for only custodial services and saved an average of just $100 per pupil, the minimum annual savings statewide for Michigan public schools would exceed $150 million.

On May 22, 2007, the Michigan House of Representatives approved House Bill 4592 — legislation that would require school districts to create a plan to transfer their procurement, human resources, busing, contracting activities and other noninstructional services to their intermediate school districts. Just prior to the House’s final vote on this bill, State Rep. Judy Emmons, R-Sheridan, introduced an amendment that would have also required the consolidation plan to include opportunities for cost savings that may be achieved by seeking competitive bids and privatizing noninstructional school services like busing, food service and custodians. Six Republican lawmakers joined 56 Democrats in rejecting the Emmons amendment, and it failed 62-46.

As eventually passed by the House, the final bill encourages, but does not require, districts and ISDs to act on the support service consolidation plans, or to make plans to seek competitive bids on the services, as suggested by the Emmons amendment.

In a 2007 survey of competitive contracting at Michigan’s public schools, Michael D. LaFaive, the Mackinac Center for Public Policy’s director of fiscal policy, and Mackinac Center Adjunct Scholar Daniel J. Smith found that 40.2 percent of districts outsourced at least one noninstructional service and that the trend toward privatization was growing (up from a revised 37.4 percent the prior year). However, the authors also point out that despite annual cost savings that can exceed $100 per pupil, there are political impediments to competitive contracting.

The Michigan Education Association, the state’s largest public school employee union, is identified as one such obstacle by a school official whose district outsources for its food and transportation services: "The contracts certainly make us more efficient and provide a level of expertise that (the district) could not otherwise expect. We are currently satisfied with both of our contractors. In my opinion the largest barrier to privatization is the highly effective MEA campaign against contracting. I think that good arguments can be made for contracting and that efficiencies can be achieved, but it is a hard sell against the MEA public relations machine."

Samples of the MEA’s opinions regarding competitive contracting are summarized in the "Alternative Views" appearing nearby.

A summary of the Mackinac Center’s 2007 research on public school competitive contracting is located at
www.mackinac.org/8881. To keep up to date regarding privatization of government services across Michigan and the nation, see the biannual Michigan Privatization Report at www.mackinac.org/pubs/mpr/.

The MichiganVotes.org tally for the school contracting amendment that was defeated appears below. 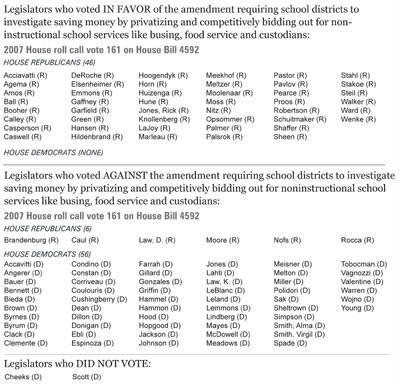