Late this May, the 2007 state budget was showing an $800 million gap between the money Michigan lawmakers had planned to spend and the money that was actually coming in. Seemingly faced with a choice between raising taxes and cutting spending, lawmakers chose neither path, as described in this excerpt of an article on the subject by Mackinac Center Legislative Analyst Jack McHugh:

"Rather than address the real problems, the Legislature and governor entered a bipartisan deal with the devil to paper it over with debt, shortchanging pension contributions, raiding so-called ‘restricted funds’ and pushing disbursements into the next year.

"... The Legislature decided to borrow $410 million against future revenue from the 1998 tobacco company lawsuit settlement, and also use another $100 million from a fund that borrows money to provide college loans. In addition, using an accounting gimmick that would probably mean jail time for a private-sector pension manager, they will shortchange by $220 million the already inadequate annual contribution to cover state and school retiree benefits promises.

"All told, it’s more than $700 million of stealing from the future to sustain excessive spending today."

There were other alternatives considered. Both chambers of the Legislature voted on a modest package of spending reductions earlier this spring. The centerpiece of the plan would have cut approximately $250 million from government spending appropriated in scores of line items. Among the cuts were $11 million from welfare spending; $40 million from state revenue-sharing; $14 million in public transportation; $3.6 million in arts grants; money for community corrections programs, loans to parolees and to a prison union leave bank; and many others. Overall state government spending is budgeted at approximately $42 billion in fiscal 2007.

On March 22, 2007, this spending plan was approved by the Michigan Senate on a strictly partisan vote of 20-17, with all Republicans approving and all Democrats opposing. On April 17, the same plan was rejected by the Michigan House of Representatives on a vote of 60-49, with two Republicans joining 58 Democrats in rejecting the cost containment measures.

In describing this vote and the alternatives facing lawmakers, Mackinac Center Policy Analyst Kenneth M. Braun pointed out that these cuts and many, many others remain on the table and should be considered in future budget discussions:

"The Legislature will soon shift its attention to writing and paying for the 2008 budget. The sensible spending restraint ideas that were tried last March and countless others remain as fiscally sound alternatives to yet another borrowing binge (or perhaps even a major tax increase). Lawmakers must not put taxpayers on the hook for more future spending or taxes. Michigan deserves a less costly tomorrow."

The MichiganVotes.org tally for the spending cuts package that was defeated is provided below. 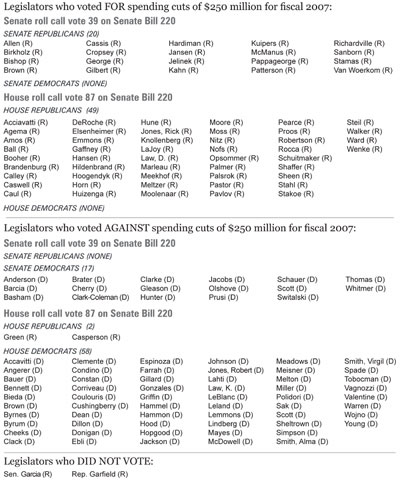