Under Michigan law, labor unions may not deduct dues from the paychecks of workers for contributions to political action committees without first asking for permission from each worker every year. This is an example of what is known as a "paycheck protection" law. As Robert P. Hunter, the regional director of the Federal Labor Relations Authority in Washington, D.C., described it in a 2003 essay for the Mackinac Center for Public Policy, "Paycheck protection codifies a simple philosophy: If unions want their members to give their own money to the political campaigns unions favor, they’re going to have to get their members’ permission first."

However, Hunter also pointed out that there are limitations to the Michigan law: "Michigan’s paycheck protection law could be improved significantly. Under Michigan’s law, payroll dues deductions may be used for political action fund contributions only after individual workers grant their consent each year. The law does not cover union-sponsored phone banks, issue advertisements or publications, many of which are political in nature. Full paycheck protection would cover all union nonworkplace-related dues expenditures."

But even the modest gains already made toward paycheck protection in Michigan are under siege. A bill that would eliminate the requirement that employees affirm annually that they want paycheck deductions to go into a union PAC recently passed the Michigan House of Representatives on May 2, 2007, and awaits attention from the Senate. House Bill 4628, sponsored by State Rep. Fred Miller, D-Mount Clemens, would make several other changes to Michigan’s campaign finance laws. The bill was the subject of numerous amendments prior to its passage.

An amendment offered by State Rep. Chris Ward, R-Brighton, would have reinserted the spirit of existing paycheck protection language back into HB 4628. The Ward amendment stated that unions would be required to get annual permission in writing from each member to use any portion of their union dues for political activity. This amendment was rejected by the House on a vote of 58-50, with one Republican joining 57 Democrats in voting it down.

HB 4628 was later approved without this amendment by the House of Representatives. If it is adopted by the Senate and signed by the governor in its present form, unions will no longer be required to ask for annual permission before contributing the dues of their members to union political action committee accounts. The bill is currently pending before the Senate Campaign & Election Oversight Committee, chaired by State Sen. Michelle McManus, R-Lake Leelanau.

The MichiganVotes.org tally for the Ward amendment to restore paycheck protection to HB 4628 is provided below. 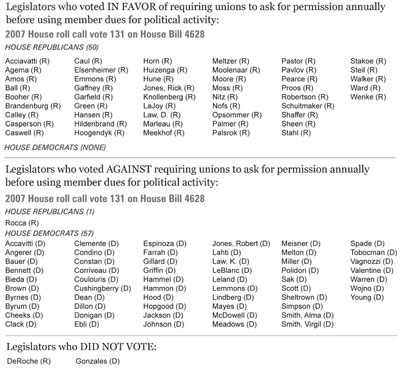