The Michigan Strategic Fund is defined by the Michigan House Fiscal Agency as a state program with numerous economic development missions, among them to "promote Michigan as a business location and tourism destination." To this end, on Aug. 22, 2007, Michigan State Sen. Martha Scott, D-Detroit, introduced an amendment to Senate Bill 239 — the 2008 Strategic Fund budget — that would have increased by $10 million state spending on tourism industry subsidies in the form of government advertising campaigns.

One problem with such government tourism campaigns is their potential unfairness, notes Michael D. LaFaive, director of fiscal policy for the Mackinac Center for Public Policy. One case LaFaive points to is Jay’s Sporting Goods, a Michigan-based family business. Jay’s paid its taxes, worked successfully to expand its stores, employed Michigan residents, and never took a dime of taxpayer subsidies for more than three decades, but was forced in 1999 to watch its own state government offer tax breaks and other special advantages to convince Cabela’s Retail Inc., a huge out-of-state competitor, to locate in Dundee, Mich. LaFaive notes that the state’s incentive package included a number of offers involving government tourism advertising:

Besides the propriety of such behavior by state government, the competence of the state agencies promoting tourism is a concern. In 2001, an AP story noted that the state tourism publication "Travel Michigan" contained errors that could seriously confuse out-of-state visitors. Among them were a road map that failed to include US-23, one of the most important arteries through the state’s Lower Peninsula, and the identification of Lake Huron as Lake Superior.

State Sen. Scott’s amendment to spend $10 million more on tourism promotion failed when only one Republican joined 17 Democrats voting for it. There were 20 votes in opposition, all from Republicans. The MichiganVotes.org tally for the amendment to increase state tourism industry subsidies by $10 million is located below. 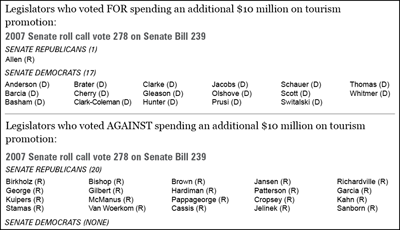