On April 19, 2007, a legislative proposal to impose a "comparable worth" labor standard on Michigan’s private employers was introduced in the Michigan House of Representatives. In a 2001 commentary on this subject, Lawrence Reed, president of the Mackinac Center for Public Policy, described "comparable worth" as the notion that "individual workers who perform jobs of substantially comparable value to their employer should be paid similar wages. If the work done by an accountant is deemed to be as valuable to an employer as that done by a typist, for example, the law would require the two employees to earn the same wage."

The three-bill package seeks to accomplish the following:

On May 8, these bills were presented with a favorable recommendation to the full House of Representatives after a 7-4 approval vote by the House Committee on Labor. The Michigan chapter of the National Organization for Women and the National Association of Social Workers each submitted statements of approval for these bills to the committee. The National Federation of Independent Businesses and the Michigan Farm Bureau are opposed to the bills. The Michigan Department of Civil Rights endorsed House Bill 4625 and is neutral on the other two bills.

Of the 110 members in the Michigan House of Representatives, 2 Republicans and 47 Democrats are co-sponsors of at least one of the bills in this proposal. Since 56 votes are needed for a majority vote in the House, this large number of co-sponsors indicates a high level of potential support if the bills are brought up for passage and referral to the Senate.

Examining the likely result of imposing a "comparable worth" standard on the private sector for a 2001 commentary on the subject, Reed observed that it "would arbitrarily and effectively abolish the role of supply and demand in the labor market." Looking at the example of Minnesota, a state that passed a "comparable worth" law in 1984 for local governments, he reported that the city of St. Paul experienced "$32 million in additional salary expense between 1985 and 1992, endless disputes about who is comparable to whom, and lingering uncertainty as to whether the city is in compliance with the law."

Reed’s commentary and the National Federation of Independent Business’ April 24, 2007, committee testimony in opposition to House Bills 4625-4627 pointed out that the Minnesota law forced municipalities to depress wages for nurses, contributing to a nursing shortage. The full text of Mr. Reed’s commentary is available at www.mackinac.org/3681. A listing of those lawmakers who co-sponsored House Bills 4625-4627 appears below. 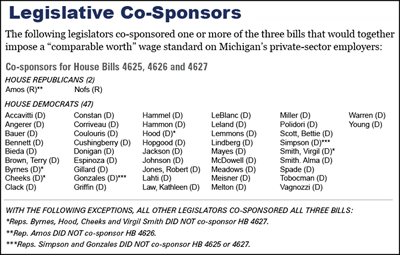