Michigan lawmakers are plowing forward with legislation that would expand tax breaks for producers of ethanol and other crop-based fuels. House Bill 5100 would amend a 2006 law that authorized substantial tax breaks for "renewable energy facilities," so that it will explicitly include crop-based fuel production facilities such as ethanol or bio-diesel plants. On Oct. 3, 2007, the Michigan House of Representatives approved the bill on a vote of 108-0. A committee of the state Senate unanimously approved the bill on Nov. 13 and presented it to the full Senate for consideration.

Despite this consensus within state government, there is strong evidence that preferential tax treatment for ethanol producers in the United States is neither an efficient energy strategy nor a sound environmental policy, and that it is producing a needless increase in food prices.

A U.S. Department of Agriculture study in 2005 concluded that the wholesale cost to produce a gallon of corn-based ethanol was $2.53. In January 2007, Jerry Taylor and Peter Van Doren of the Cato Institute in Washington, D.C., stated that this is "several times what it costs to produce a gallon of gasoline." Even before adding on federal and state gas taxes, this was already within hailing distance of the historically high retail price of gasoline that we were paying at the pumps at the end of 2007. Taylor and Van Doren also quote another source that estimated that the federal subsidy for each gallon of ethanol is $1.05 to $1.38 – or roughly half of its wholesale production cost – while the comparable figure for petroleum subsidies is 3 cents per gallon.

And what is worse, ethanol also contains substantially less energy per gallon than gasoline. A study published in the Fall 2007 issue of Regulation magazine revealed that E85 "flex-fuel" vehicles, using ethanol-gasoline blends, get 20 percent to 30 percent worse mileage than if they used gasoline only.

As a global warming remedy, ethanol also falls short — even by the standards of those who blame fossil fuel burning for climate change. Jeff Goodell of Rolling Stone magazine is one such critic. He writes in the June 24, 2007, issue, "Ethanol doesn’t burn cleaner than gasoline." In fact, he continues, corn-ethanol burns "as dirty as conventional gasoline and does little to solve global warming." Also, ironically, "Corn production depends on huge amounts of fossil fuel — not just the diesel needed to plow fields and transport crops, but also vast quantities of natural gas used to produce fertilizers."

Growing corn for fuel also displaces human food and water consumption. Criticizing federal subsidies on Oct. 17, 2007, a Wall Street Journal editorial opined that corn-based ethanol was "absurdly inefficient" and had "already driven up food prices." Regarding water consumption, The Journal noted a study that reveals that making a gallon of ethanol requires "a staggering 1,700 gallons of H20." Because of this massive agricultural drain, ethanol promises little in the way of replacing the present U.S. need for oil imports. The editorial cites Science magazine, which recently published an estimate showing that just getting 10 percent of our motor fuel from ethanol would require dedicating 43 percent of American cropland to only that purpose.

The Regulation magazine article postulates that if every single ear of corn now grown on U.S. soil were devoted to ethanol, it would replace only 3.5 percent of American gasoline requirements. But even the comparatively modest diversions right now are already taking a toll. The director of the Michigan Department of Agriculture said this past summer that Michigan ethanol production was causing corn prices to climb for Michigan-based cereal maker Kellogg. Goodell of Rolling Stone reports that some U.S. hog farmers have switched from corn to "trail mix, french fries, and chocolate bars" as cheaper alternatives to fatten up their pigs. Putting the tradeoff in perspective, Goodell quotes a University of Minnesota study that estimates that 450 pounds of corn — enough to feed one person for a year – is needed to fill just one SUV gas tank with pure ethanol.

The MichiganVotes.org tally for the bill that authorizes tax breaks for ethanol production appears below.

See "Sen. Kahn Drives His Ethanol-Powered Car to Senate Session" for a different perspective on ethanol. 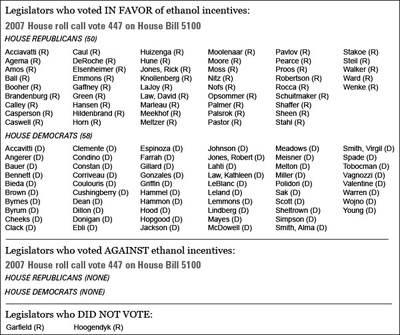