Some frugal government has quietly brewed amidst the state budgets of the last half-dozen years; the Michigan secretary of state implemented a plan that reduced the cost and number of its branch offices while improving service. The plan is referred to not as “downsizing,” but optimistically as modernization. However, a proposal to continue down this lower-cost road was targeted during the 2008 budget process. Funding for secretary of state branch offices has increased by less than half the rate of inflation from fiscal 2000 through 2007, and total staffing declined 6.1 percent. There were 173 branches open in 2000, and the first wave of modernization in 2004 reduced this total to 153. Despite reduced resources, the secretary of state reports shorter wait times and expanded weekday and weekend service hours at the remaining facilities.

Fresh thinking and the implementation of new technologies made this productivity possible. Using the Internet and self-service stations moved visitors out of lines and on their way. One million annual trips to branch offices — in a state with 7.1 million drivers — were eliminated by creating a permanent license plate for trailers. Other annual trips have been wiped out entirely by encouraging the renewal of automotive plates through the mail or via the Internet.

The secretary of state wanted to close nine more branches in 2007, while at the same time creating 10 more “PLUS” offices and one more “Super!Center” from those that remain. This would leave Michigan with 144 facilities where residents could register vehicles and renew licenses — roughly the same as in New York, a state with more than twice the number of drivers. California, with more than three times as many drivers as Michigan, has just 173 locations for registration renewals and 73 locations for license renewals.

There was substantial opposition. One lawmaker implied that it would disenfranchise “minority voters,” even though every Michigan voter can register at their local township or city clerk’s office, and no one votes at a secretary of state office. Another said the state should discourage policies that lead to “urban sprawl;” an unlikely result with Michigan’s struggling real estate market. There was an allegation that removing the Milan branch would devastate the town, as if the purpose of these offices is to generate local commerce, rather than provide a cost-effective government service.

On Aug. 8 , 2007, three Republican state representatives joined 53 Democrats in approving House Bill 4492, which would rewrite the funding formula for the branch offices so as to prohibit the closures. This followed a local Secretary of State Terry Lynn Land rally against a proposed closing in the Saginaw area that drew 200 protesters, including State Rep. Andy Coulouris, D-Saginaw, who promised “pizza and sodas” if the protesters would repeat their tactics in Lansing. About 50 did exactly that.

The final 2008 budget did not include this prohibition, but did include a provision demanding various reports and advanced notifications from the secretary of state before a branch office is closed or relocated. It is not clear whether this will impede the modernization plan or not. The MichiganVotes.org tally for the prohibition on closing branch offices is provided below. 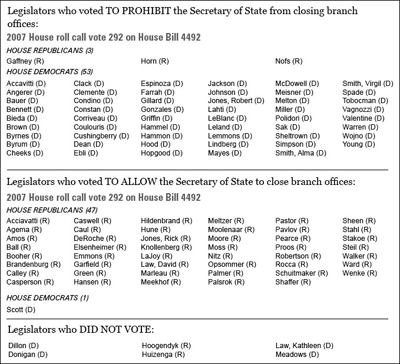