With gross spending approved at $42.8 billion, the fiscal 2008 state budget is the largest in Michigan government history (see "The Year of Living Expensively," January/February, 2008 Michigan Capitol Confidential.) But a sample of recent legislative actions indicates that lawmakers are poised to break this record yet again.

Left unfinished in the fiscal 2008 budget completed last fall was the allocation of mostly federal dollars to infrastructure improvements at dozens of airports across the state. An attempt to tie up this last loose end and steer federal dollars to the construction sites in time for the spring building season was written into Senate Bill 511 and unanimously approved by the Michigan Senate on March 20, 2008.

But before that happened, the airport improvement financing became the subject of controversy when Sen. Mickey Switalski, D-Roseville, sponsored an amendment that would have added pre-approval for an additional $1 billion in spending for state university and community college construction projects. This additional spending was supported by the governor, and Switalski argued that it would stimulate Michigan’s fragile economy by creating construction jobs.

This was disputed by some Republican senators who countered that a "broke state government" should not be making the problem worse by borrowing the extra money necessary to finance new projects. Two GOP senators voted with 15 Democrats in support of Switalski’s amendment, but it was narrowly defeated by 19 Republican votes in opposition.

Deficit spending was the subject of another proposal that was considered this March. House Bills 5865-5867 would authorize spending $60 million in borrowed money to establish the "Michigan Promotion Program," a multiyear tourism marketing and business development plan to be run by state workers.

Michigan already has a government-financed tourism promotion program. This marks the second attempt within a year at increasing its cost. The Senate rejected an amendment submitted in August 2007 that would have ramped up spending an additional $10 million (see "Extra Tourism Subsidies Defeated in State Senate," November/December,2007 Michigan Capitol Confidential.)

But this new attempt to increase state spending for tourism promotion has fared much better, in large measure because Gov. Jennifer Granholm specifically requested it in her 2008 State of the State message. Each of the bills passed with overwhelming bipartisan majorities this spring. Only 11 of the 110 state representatives voted consistently against all three bills.

"We have to stop mortgaging the state’s future to deal with the short term," noted state Rep. Fulton Sheen, R-Plainwell, who cast one of the dissenting votes. "They should cut spending now, not have to cut twice as much later."

The following week, the Michigan Senate voted to unanimously approve Senate Bills 1223-1225, a $50 million version of the Michigan Promotion Program. Upon its return from a spring break , the full Legislature is expected to reconcile the minor differences between the two proposals and send bills to the governor for an anticipated signature.

Legislative activity in March also included early votes toward assembling the fiscal 2009 budget. The first version of House Bill 5804, which would fund the Department of History, Arts and Libraries, is just one example of future spending inclinations. The initial draft was approved by the House of Representatives on March 19. It would appropriate a gross spending level that is 8.1 percent higher than what the governor requested and 15.3 percent higher than the spending level for fiscal 2008.

State Rep. Dan Acciavatti, R-Chesterfield, the ranking GOP member of the House Appropriations Committee, characterized the first draft of the HAL budget as leading state government "down a path of structural budget deficits and devastating tax increases like last year."

One GOP state representative joined 58 Democrats voting in favor of this proposed HAL budget, which passed over the objections of 49 other lawmakers — all Republicans. The bill was referred to the Senate for further deliberations.

The Michiganvotes.org vote tallies for all of these legislative actions are below.

For additional information regarding this issue, please see www.mackinac.org/9448. 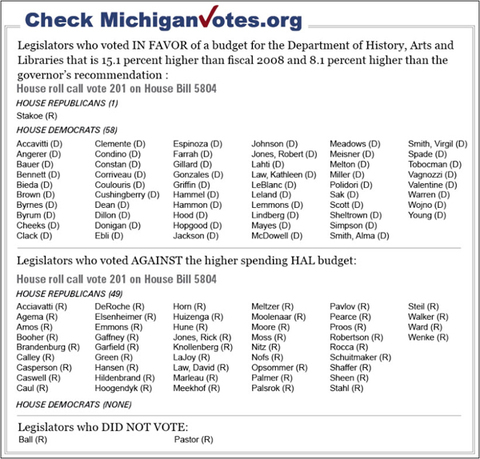 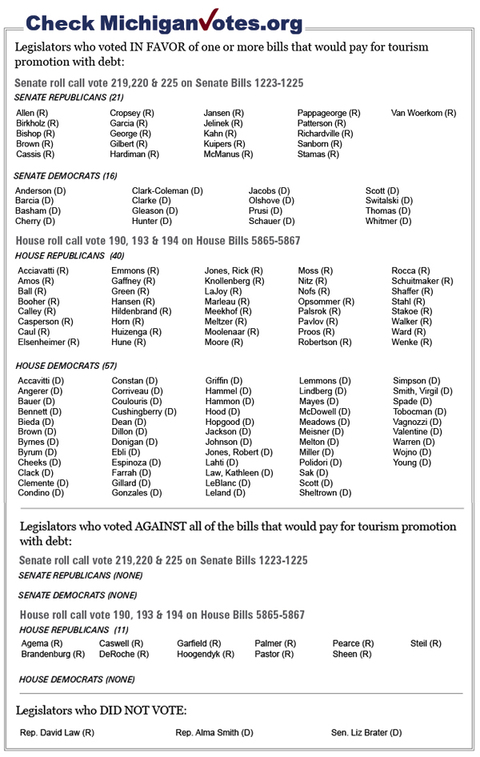 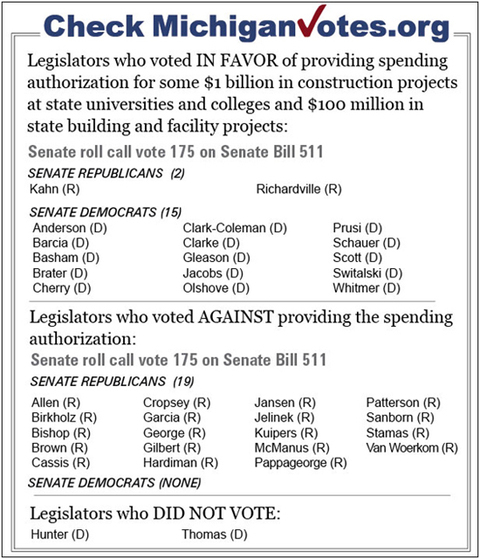