Many Kent county parents are hopping mad over their county health department’s diktat that children must wear face masks in school. Officials responded by scheduling a public meeting in a venue big enough to accommodate the large crowd expected.

The crowd came, but not county health officer Adam London, who addressed the agitated parents using a remote video connection. 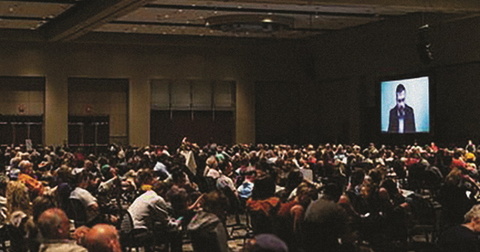 The above photo from the meeting evoked the famous 1984 Apple Computer commercial that used imagery from George Orwell’s timeless tale.

As for the mask mandate, a recent Wall Street Journal column cited evidence from several sources including the Centers for Disease Control strongly suggesting that the “science” behind mask mandates is lacking. Excerpts include:

A New York magazine article last week reported on the findings of a “mostly ignored, large-scale study of COVID transmission in American schools” that was published in May by the Centers for Disease Control and Prevention. […] “These findings cast doubt on the impact of many of the most common mitigation measures in American schools,” the magazine reported. “Distancing, hybrid models, classroom barriers, HEPA filters, and, most notably, requiring student masking were each found to not have a statistically significant benefit. In other words, these measures could not be said to be effective.”

The CDC study comports with the findings of Brown University economist Emily Oster and four co-authors, who analyzed student Covid rates in Florida, New York and Massachusetts during the 2020-21 school year with a focus on the effects of student density, ventilation upgrades and masking requirements. “We find higher student COVID-19 rates in schools and districts with lower in-person density but no correlations in staff rates,” they wrote in a paper published earlier this year. “Ventilation upgrades are correlated with lower rates in Florida but not in New York. We do not find any correlations with mask mandates.”

Mr. London apparently logged off from his virtual connection and did not hear the public's complaints, so the Kent County meeting lacked the dramatic ending of the 1984 Apple commercial.