Gov. Gretchen Whitmer again tweaked her epidemic orders that restrict individual behavior, now permitting contact sports. But the governor continues to maintain strict limits on social gatherings. A look back at these restrictions over time makes the current ones hard to justify. It appears as if the governor now believes that social gatherings are one of the most dangerous activities when it comes to spreading COVID-19.

These restrictions are hard to understand, considering that people will gather at restaurants, exercise facilities and sports arenas in larger numbers. If hundreds can now gather in a school gym to watch a high school basketball game, why can’t a dozen people watch a sporting event together from the comforts of their home?

There is no clear pattern to the governor’s restrictions on gatherings during this pandemic. She has maintained relatively relaxed restrictions while COVID-related cases and deaths rise, and she tightened them when the numbers had improved. Even with the recent declining trends and after a million vaccinations, the current restrictions remain the harshest they have been since the stay-at-home order last spring.

The table below shows the restrictions on social gatherings implemented since the stay-at-home order ended. It also lists the seven-day rolling average of daily positive COVID tests per million people and seven-day rolling average of daily COVID deaths on the day the orders were announced. These data are from the MI Safe Start Map as reported on Feb. 9. The house icon refers to the limit the governor imposed on how many different households are permitted to gather in the same space.

Graphic 1: Restrictions on Gatherings in Michigan since June 1, 2020 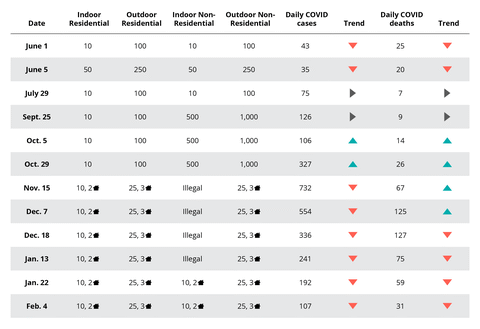 Many of these decisions are puzzling when you consider the trends in the data at the time they were put in place. For instance, continuing to allow indoor gatherings of up to 500 and outdoor ones of up to 1,000 in late October, as both daily cases and deaths had been rising for more than three weeks, calls for an explanation. It’s especially odd because these relatively loose restrictions were immediately followed by the harshest limitations since the stay-at-home order. Adjustments to the rules seem to operate less like a dial, a metaphor Gov. Whitmer has repeatedly used, and more like an on-off switch.

The most recent decision to maintain these strict limitations is questionable. Daily deaths and cases per million are both now significantly lower than when the current restrictions were put in place in mid-November — and still trending in the right direction. The numbers are not much different from where they were in September and October, when the governor allowed indoor gatherings 50 times larger and outdoor gatherings that were 40 times larger.

Gov. Whitmer’s unwillingness to budge on social gatherings is also puzzling because she has relaxed most of the restrictions she put in place at the start of the second lockdown on Nov. 18. Once-closed movie theaters, casinos and bowling alleys were allowed to reopen, and high schools and colleges could meet again in person starting Dec. 21. Indoor gatherings at restaurants got the green light Feb. 1, and now contact sports are allowed again, starting Feb. 8. It’s as if the governor trusts Michigan families and households the least when it comes to gathering safely.

Of course, it’s possible that social gatherings at people’s homes and elsewhere are more dangerous. Maybe there’s even data and scientific evidence to suggest that. But because the governor still will not articulate the rationale she uses to make decisions, we can only guess why social gatherings are still heavily restricted.