States have long had power over how alcohol is distributed and sold within their borders. This is an outgrowth of Prohibition’s repeal in 1933. Alcohol manufacturing and sale was again made legal then but states would impose a wide variety of controls over who makes, distributes and sells different types of alcohol, and often how much of that is done and by whom.

The result is a state-by-state diverse patchwork of laws and rules often promoted as ways to ensure public safety. Some restrictions are more rational than others, but overall, how effective are control regimes? This is an important question because decisions states (or courts) make about alcohol regulations may impact health and safety as well as alcohol prices and entrepreneurial opportunities. It is also important because opponents of alcohol reform have in the past pointed to safety concerns to try and quash reforms.

To examine this question, we divided up states by the degree to which they exercise control over the alcohol industry into four large categories: Heavy, moderate, light and license. A heavy control state is one that maintains a retail monopoly in at least two types of alcohol (beer, wine, and liquor), and a wholesale monopoly in at least one type of alcohol. A moderate control state has wholesale and retail monopolies in one type of alcohol and a light controls state acts as wholesaler for one type of alcohol but does not act as retailer for any. A license state simply licenses wholesalers and retailers to do business. It does not act a wholesaler or retailer for any type of alcohol. States have more direct responsibility over alcohol’s public health outcomes when they are the only entity that is allowed to sell or wholesale it.

After doing so we compared each to various measures of social outcomes, such as alcohol attributable deaths. (See Graphic, below.) 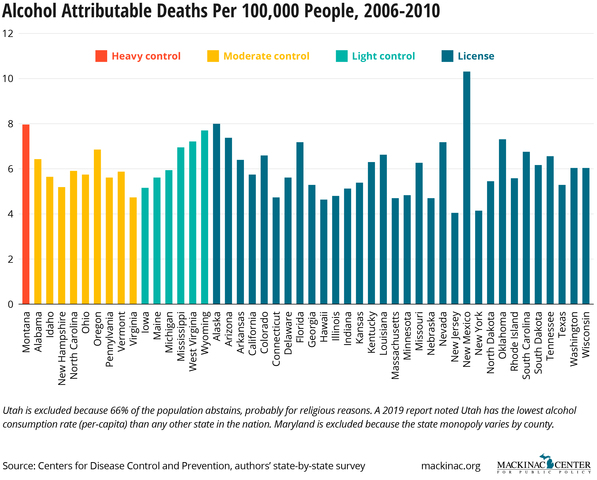 If degree of control mattered the bar graph below would line up from left to right like a stair case, with heavy control states showing the fewest alcohol attributable deaths per 100,000 people and license states showing the most. They do not. Outcomes are scattered, though it is worth noting that nine of the ten lowest states in our graph are license states. The other, Virginia, is a moderate control state. The sole heavy control state has the third worst number of alcohol attributable deaths in our ranking, behind New Mexico and Alaska.

In addition to alcohol-attributable deaths we also ran this exercise using data from 2006-2017 for vehicle fatalities with driver blood alcohol content greater than .01 and .08, fraction of underage drinkers and fraction of binge drinkers, too. In each case we found no obvious correlation between control regimes and social outcomes. We have also previously examined social outcomes by state in 2012 using data from 2005 to 2010 and likewise found no relationship between control regimes and social outcomes. We detailed our findings in a paper titled, “Alcohol Control Reform and Public Health and Safety.”

Such analyses are important because opponents of alcohol control liberalization have and may use threats to public safety as a cudgel against change, which is brewing in several states.

Consider that Virginia recently repealed advertising restrictions for “Happy Hour” specials, which had been defended as necessary to “prevent excessive alcohol consumption in restaurants.” Some states are considering laws to permit alcohol delivery (and via mobile apps) and have been met with opposition from those that believe it will facilitate underage drinking.

Court cases have been advanced to liberalize alcohol laws, too. Last December, an anti-reform organization founded by beer wholesalers, the Center for Alcohol Policy, recognized the challenges to current alcohol regimes being posed by lawsuits, arguing “that defense of the 21st Amendment and state alcohol laws will require strong public health and safety justifications — as well as other legitimate interests …”

In Michigan legislation has been introduced to double the amount of beer that can be self-distributed by small brewers and to remove the state’s minimum price on liquor law. If history is any guide deregulation will also be met there with opposition on public health and safety grounds.

There is much that can be learned from America’s experiment with alcohol Prohibition and subsequent regulation. One big lesson is that the degree to which state (and many local) governments lord over their alcohol trades and consumers may not be as effective as some would have others believe.