Michigan voters have already spoken on right-to-work. In November 2012, a majority of voters rejected an attempt to outlaw right-to-work in Michigan. Any attempt to repeal right-to-work would be in direct contradiction to the spoken will of the people.

If Proposal 2 of 2012 had never been brought to voters, then-Gov. Rick Snyder might not have signed right-to-work legislation.

Snyder, a Republican had been slow to embrace right-to-work and said it was not on his agenda. But he warned unions that if they pursued a constitutional amendment to outlaw right-to-work, things would change.

The unions did pursue an amendment — through Proposal 2 — and things did change. The next month, legislators passed the right-to-work bill and Snyder signed it.

Out of 4,500,955 Michigan voters who cast a ballot on Proposal 2, about 58% voted no, compared to 42% who said yes, according to Michigan Secretary of State data.

Right-to-work gives the individual worker the choice of whether to pay into a union or not. In 2012, voters were asked whether the Michigan Constitution should deny that workers that right. The people spoke, and they said no. 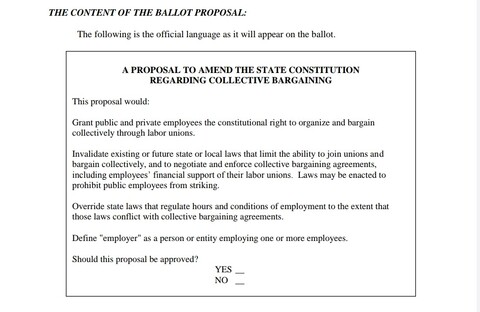 The next month, a right-to-work bill was passed by lawmakers and signed into law by Gov. Rick Snyder.

Unions had attempted to play coy on Prop 2, arguing that it wasn’t really about right-to-work. But as Jack Spencer reported in February 2013, it was, and a union leader admitted it himself.

As Spencer wrote, after a Metro Times interview with then-UAW President Bob King:

King made it even clearer that right-to-work was the issue the unions were concerned about when they came up with Proposal 2. In that context he concluded:

So we in labor said, ‘You know, we can’t just sit and wait for the lame duck, we know it’s coming, this has been a 10-year, at least, effort by [Dick] DeVos and other right-wingers — the Koch brothers were also involved. So it was our leadership responsibility to try and head this off. So we put together Proposal 2.

The Metro Times then asked King the following: “So if Gov. Snyder had publicly committed not to sign right-to-work, Prop. 2 would not have been pursued?”

Democrats have signaled that right-to-work is among their top targets in 2023, when they control both houses of the Michigan Legislature.