Last week, when U.S. Sen. Debbie Stabenow, D-Michigan, spoke at Ann Arbor Pioneer High School, the 72-year-old senator was unmasked, while the teenage students she spoke to were forced to wear masks.

Stabenow’s being maskless was in violation of the district’s publicly announced masking policy.

On Jan. 8, the day before classes would resume after the holidays, Ann Arbor schools superintendent Jeanice Swift announced that students would have to wear masks for two weeks, through Jan. 20.

Twice in Swift’s notice, she underlined the word “required” when talking about masks.

“The Ann Arbor Public Schools will require well-fitting masks to be worn by students, staff and visitors while indoors in AAPS schools, beginning on January 9th and during the first two weeks following the winter break,” Swift wrote. “Extra masks are available at all school buildings for use by students and staff.”

There did not appear to be a lack of masks at Ann Arbor Pioneer during Stabenow’s visit on Friday, Jan. 13. Every student pictured in the auditorium is wearing a mask. The pictures come from a Jan. 13 tweet from Swift. 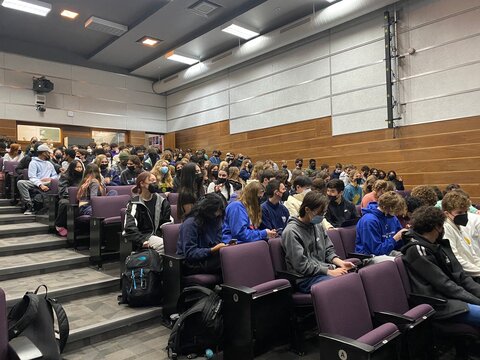 The only person pictured without a mask is Stabenow, who was likely the oldest person in the room. From pictures on Swift’s Twitter feed, it appears that Stabenow’s mask is on the podium during her speech. Rather than covering her nose and mouth, like everybody else. 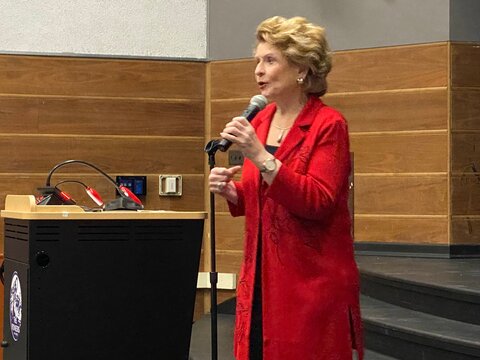 In Swift’s Jan. 8 announcement, the superintendent made it clear that visitors were covered under the policy. There have been no updates since.

Mask policies are put in place, presumably, to protect the high-risk population: the elderly, the obese and the infirm. So why would a high-risk, high-importance guest like Stabenow be allowed to opt out of a mask policy designed to protect her?

"People on my side of the aisle are uniformly wearing masks,” Stabenow said during an MSNBC appearance. “Unfortunately, people on the Republican side, the majority, are not, which is also frustrating."

“Students were highly engaged as she shared insights from her impressive decades of legislative experience,” Swift reported.

Swift quoted from Stabenow’s speech: “We have to do it together-that’s the only way it works!”

If Stabenow’s words are so important that they can’t be muffled by a mask, how much more important is classroom instruction in math and English and history?

If Stabenow’s speech was can’t-miss, what is the core curriculum?

Stabenow is serving her fourth senate term, and has said she will retire in 2024.