LANSING – In 2003 Julie Baumer was 27 years old, had a good job as a mortgage loan officer at a bank and was looking forward to marriage. She was also in the midst of adopting her newly born nephew after her younger sister decided to place him for adoption.

While Baumer was taking care of the baby, he became very ill and she took him to the emergency room. It was later determined that the baby had a form of childhood stroke, but at the time, doctors incorrectly diagnosed the him with shaken baby syndrome, a form of child abuse.

Baumer’s life was turned upside down, and she was convicted of child abuse in 2005. She didn’t have extensive funds to defend herself. A Macomb County Circuit judge would later overturn her conviction due to her counsel’s ineffectiveness, according to The National Registry of Exonerations.

At her trial, two doctors were called as experts for the prosecution. One doctor testified the baby had suffered blunt force trauma. The other doctor concluded the skull fracture was from an older injury, but that the baby suffered from shaken baby syndrome due to violent shaking by Baumer, according to The National Registry of Exonerations. The registry is a project of the University of California Irvine, University of Michigan and Michigan State University.

That registry stated the two doctors’ testimony was the only evidence presented that Baumer abused the baby. Baumer’s defense attorney didn’t present any medical testimony to rebut the prosecution witnesses.

Baumer was sentenced to 10 to 15 years in prison.

Baumer was exonerated in 2010 after the Michigan Innocence Project agreed to take her case, and it proved that the boy had suffered a stroke rather than child abuse. While Baumer is glad to be free from prison and the state has promised to compensate her for the years she wrongly spent there, she still mourns the years she lost.

“In short, I had to start over,” Baumer said. “The missing years can never come back, and they were critical years in building relationships, establishing a family and acquiring a profession and building a career.”

As someone exonerated after a miscarriage of justice, Baumer was one of three people to speak on a panel Jan. 18 about the importance of reforming the procedures that govern forensic evidence in Michigan’s criminal justice system. 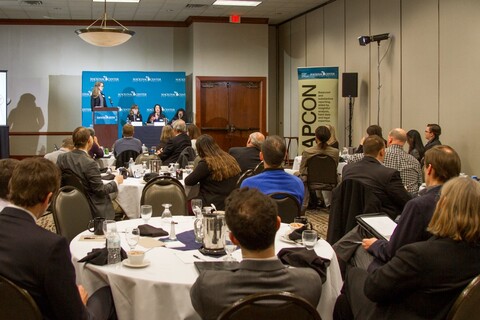 Forensic evidence is a category of physical evidence that is evaluated using chemistry or physics. It can be used to re-create the crime scene, and if treated properly, can provide objective information about an incident. There are various types of forensic evidence, including bullet trajectories, fingerprints and DNA.

According to Jayaram, about 40 percent of all criminal cases in the United States involve forensics.

Michigan has had to deal with the improper management of forensic evidence in the past. In 2008, the Michigan State Police audited Detroit’s crime lab and found it performing so poorly that the Detroit mayor and police chief shut it down, according to the Senate Fiscal Agency.

The Michigan State Police audit revealed, among other findings, an error rate of 10 percent in the 200 firearms cases that were reevaluated.

"To put this in perspective, ASCLD, the accreditation body for the State lab, does not have an 'acceptable' error rate," a 2009 Senate Fiscal Agency report stated.

Improper use of evidence can also have financial repercussions for taxpayers; a 2016 law authorizes public compensation for those wrongfully put in prison.

Krisai, whose work for the Reason Foundation has also encompassed sentencing reform, said she believes that the the need for rigorous and transparent practices in presenting forensic evidence is a public safety issue. Wrongfully charging someone, she said, not only harms the person who is improperly charged, but it also means the actual perpetrator is still free. Those individuals then go on to commit more crimes, often violent ones such as rape.

Jayaram, who worked for the ACLU before joining the Innocence Project, called for more openness in treating evidence.

“A lot of this,” she said, “is really about creating transparency in the system. Evidence goes into the lab, a report comes out, and we really don’t know what happens in between.”

The participants at the event suggested several reforms, including creating a state forensic science commission to improve Michigan’s forensic procedures and seek to correct any errors that may be made by forensic labs.

A possible point of improvement raised by the panel was implementing safe-guards to ensure forensic evidence is not overstated. At the event, Krisai said the level of accuracy possible when identifying someone with a strand of hair can often be over-stated.

Another possible reform includes getting rid of faulty types of forensic evidence that is based on “junk science” like bite-mark analysis. Some reform advocates also recommend making sure crime labs aren’t in the same building as prosecutors.

“As a former sheriff and law enforcement officer for 31 years I know the importance of properly collecting and handling evidence,” Jones said in a statement. “I know the importance of setting standards for all to follow. The state cannot afford to leave criminals on the street to prey on more victims. The state cannot afford the lawsuits when someone is wrongly convicted.”

When asked if anything could be done to improve its forensics procedures, the Michigan State Police gave the following statement.

"With its vital role in the criminal justice system, the integrity and quality standards of the Michigan State Police (MSP) Forensic Science Division is of paramount importance to the department. Therefore the Michigan State Police maintains a multi-faceted quality assurance program that includes accreditation by a third-party, proficiency testing and continuing education, that among and other programs, insures our quality standard is being met consistently across our laboratory system."

A video replay of the event: