The NEA, the nation's largest teachers union, saw its working membership decline by nearly 165,000, or 6.2% since 2018. In that year, the U.S. Supreme Court ruled in Janus v. AFSCME that government employees cannot be forced to pay union dues or fees as a condition of employment. In essence, this court decision established a national right-to-work policy for government workers across the country.

Membership in the MEA has been declining since Michigan became a right-to-work state in 2013, meaning workers can no longer be forced to pay union dues or fees as a condition of employment. The union is down by about 40,000 members, or 33%, since then. It lost 2,500 members, or 3%, in the last year and stands at roughly 81,000 working members. These drops have occurred even though the number of teachers in Michigan has remained steady. 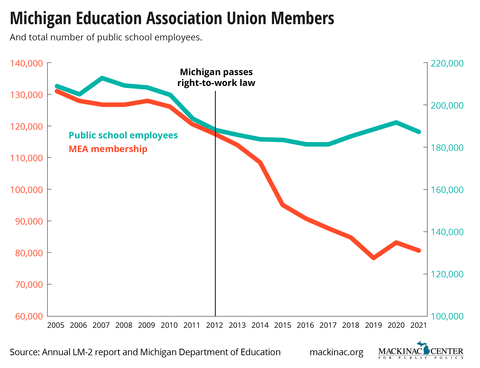 The MEA’s annual revenue dropped by $30 million in the past year, even though it has raised the union dues amounts it charges members since 2013. Dues were $635 then and are now $655 for working members. Employees who opt for MEA membership are required to become a member of the NEA and pay an additional $189 per year.

The MEA’s spending has decreased by $19 million, which means it has the lowest revenue received and money spent in the last 20 years.

“Recent data shows that, when given the choice, Michigan teachers increasingly would rather not be members of the Michigan Education Association. If the MEA wants to reverse this trend of declining membership, it should focus on providing its members tangible benefits, such as training and resources, rather than continuing to promote unpopular political positions,” said Steve Delie, director of labor policy at Mackinac Center for Public Policy.

The organization has lost $40 million in revenue and decreased spending by $33 million since 2013.