The pleasant peninsula is being pulled in disturbing directions by coastal influences lately, and the results are not pretty.

With its newfound love of language policing, Michigan is on the cusp of California.

Copying the University of Southern California School of Social Work, two offices of the Michigan health department were ordered, in a Jan. 4 directive, to stop using the term “field worker” to refer to employees whose work happens in the field. 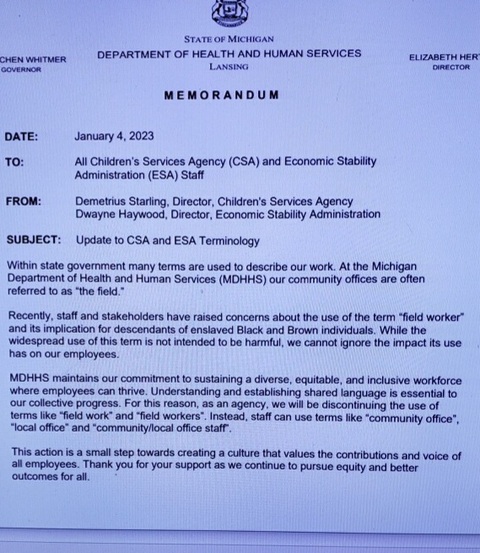 They work “in the field,” serving clients. Not in an office, serving themselves. The office is where bureaucrats write memos.

Since when do we all need so much advice on how to talk to each other? Advice columns on how to get through Thanksgiving dinner are a cottage industry. Human resources departments are a literal industry.

This overly moderated world comes at the expense of clarity and honesty. It gives the heckler’s veto to anyone willing to invoke victim status.

Because we are adults with brains, we can safely distinguish between the field work done by a social worker and the work done in fields by slaves, once upon a time. I believe we have that capability.

A New York public TV station, in partnership with the New York City Department of Education, airs an educational program so controversial it needs a disclaimer.

That program is sent to PBS affiliates around the country. Twice in December, on consecutive days, it aired in Michigan.

During the May 24, 2021, episode of “Let’s Learn,” a drag queen and author named Lil Miss Hot Mess read from the book, “The Hips on the Drag Queen Go Swish, Swish, Swish.” The book features characters such as Cinderfella and Ella Menopipi.

The episode aired twice in December in Michigan, on the Michigan Learning Channel.

Anticipating the pushback, the program disclaimer notes that “stations are free to broadcast at their discretion (or not).”

But Detroit Public TV says it was a technical error, and not its discretion, that led to it and other stations to air the episode featuring drag queen story time. There is no reason to doubt this. Mistakes do happen. CapCon makes them. Everybody makes them.

As Georgeann Herbert, senior vice president of strategy for Detroit Public TV, told CapCon: “This program episode aired due to a technical error after we had made the decision that it did not fit the audience of the Michigan Learning Channel.”

Herbert added: “If not for a technical mistake, our audience would not have seen it.”

But before this goes any further, a word to the wise: Don’t California my Michigan. Don’t New York my Michigan. Not purposely or accidentally. Not by free choice or by technical error.