An important moment in Michigan politics took place in June, but nobody knew it at the time.

We thought the June 25 Twitter spat between incumbent Dana Nessel, a Democrat, and Republican challenger Matt DePerno, was an appetizer. The first taste of a lively debate between polar-opposite candidates. 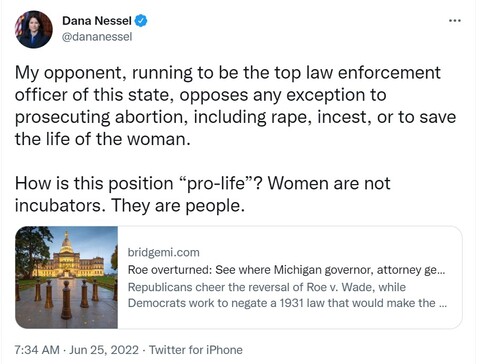 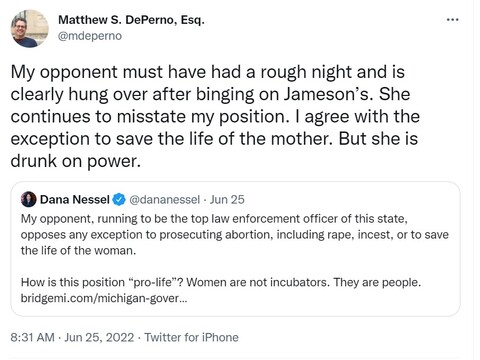 If that’s how heated things got on a Saturday morning Twitter exchange, imagine Nessel and DePerno on the debate stage. Michigan might get the fight over its future it deserves.

But we will be left to imagine, as Nessel announced last week that she wouldn’t debate DePerno. She said DePerno is “not a serious candidate.”

DePerno has recently called Nessel the “Groomer General,” and sells bumper stickers that say “Lock Whitmer and Nessel up.” It appears he did not sign the civility pledge.

Nessel might not view DePerno as a serious candidate, but he is seriously on the ballot. He could win.

The less-worthy Nessel believes DePerno to be, the greater the public service she would do in exposing that in an open forum.

To argue the public interest in a public forum is the lawyerly thing to do.

Perhaps Michigan election law needs to be rewritten so that these debates are standard and not done out of the kindness of incumbents’ hearts. If a candidate can be kicked off the ballot for filing incorrect campaign finance documents, why not for refusal to debate?

We could learn things about DePerno, and about Nessel, on live TV with cameras rolling, that we will not learn with a series of dueling campaign rallies. The debate stage cannot be simulated in the metaverse, replaced with Zoom out of an abundance of caution, or walked away from with a huffy statement.

Nessel’s refusal to debate is part of a disturbing trend in Michigan.

Duggan said Adams was not a serious candidate, adding that debating him would give a platform to hate speech.

Just last year, in an 80% Black city, Detroit’s white mayor said that a Black challenger would preach hate, not debate. Somehow, rather than challenge Duggan on the point, the Detroit media responded with a collective shrug.

And isn’t it convenient that the list of people Nessel and Duggan view as too dangerous to debate includes the person who’d appear opposite them on the ballot?

In Official Michigan, incumbents increasingly view debates as optional. Why? And why is this their choice to make?

How is this transparent? How does it serve the public?

Scrutiny is part of the job for public officials. Increasingly, it’s a part they’re eager to opt out of.

The Lansing media can’t be counted on to call this out; its more likely to explain it. State law must do what social custom cannot, and give the public the debate it deserves.

Maybe it won’t happen this year. But Michigan's new normal is worrying. There Should Be A Law requiring debates.

Someday, the candidate who was Too Dangerous to Debate will win. Then we will have in office someone who is dangerous, with a mandate. With all the advantages of incumbency.

What if the public could have seen their true character on the debate stage? The temper, or the logical leaps, or the willingness to demonize? Wouldn’t it be better to learn those things on the debate stage, and not when the person is in office, speaking from the bully pulpit?

Let’s do this right. Let’s do this debate on stage. Lights and cameras. Nessel. DePerno. Duggan, too, if he runs again in 2025.