Detroit boosters in the media and elsewhere have claimed the Motor City has turned itself around, with strong job growth to prove it. There is also a counter-narrative, often voiced as grumbling by officials in surrounding cities, that Detroit’s gain is their loss because its employment gains have come from employers relocating from their suburban facilities.

Crain’s Detroit Business reporter Chad Livengood recently distilled this into a May 30 tweet, in which he said: “Metro Detroit population has been stagnant for decades. We’re not really growing. Just cannibalizing and redistributing."

But employment and population numbers neither support nor refute either side of the argument. The number of city residents with jobs has increased, but the gains have been modest in relative terms.

Some well-known companies — including Campbell Ewald, Tata Technologies and Accenture — have moved or are planning to move from their suburban offices in Warren, Novi and Southfield, respectively. But their former suburban homes often still have a growing labor force of people who are either employed or seeking work.

On a countywide basis, any losses in employees by the suburbs to Detroit have been more than overshadowed by growing employment numbers in both Macomb and Oakland counties, according to the Bureau of Labor Statistics. It’s important to note that as long as employees don’t quit when a company moves its headquarters, regional economic statistics aren’t affected.

Some cities in Macomb and Oakland counties – Warren and Southfield, for instance – have seen their labor force and population numbers remain nearly the same since 2010.

Some economic numbers in Detroit have improved slightly in recent years, including the number of residents working.

From April 2010 to April 2018, the unemployment rate in Detroit dropped from 24.9 percent to 7.4 percent, and the number of employed residents increased by more than 17,000 from 208,887 to 225,963. Those eight years include the beginning of Detroit’s often-touted comeback, with billionaire Dan Gilbert starting a property-buying spree and moving his employees downtown. 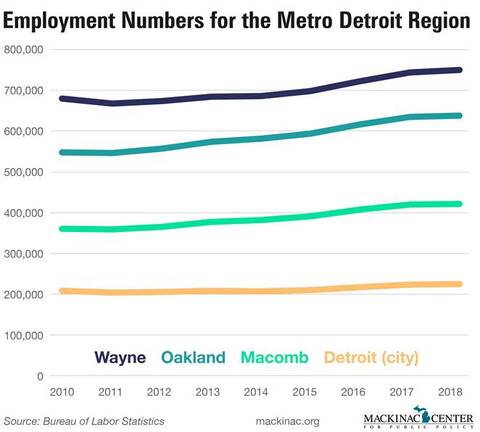 While Detroit’s long-promised revival has brought companies like Quicken Loans and Google from the suburbs, Detroit’s northern neighbors – Macomb and Oakland counties – have experienced substantial growth in the number of residents employed as well as in labor force and population.

Macomb County also posted impressive gains, with its unemployment rate dropping from 14.3 percent to 3.5 percent, and the number of employed individuals increasing by more than 60,000, going from 361,159 to 421,170.