By December 2013, Michigan’s new right-to-work law had been in effect for nine months.

The Michigan Education Association was collecting dues from 113,147 active members. Its spokesman said the union’s response to the new law was to get the word out to members about what the MEA could do for them.

Not mentioned was another tactic the union had employed, this one in the three months between the day the governor signed a right-to-work bill and the time it took effect. The new law would not apply to existing union contracts, which would continue to require school employees to pay union fees or dues until they expired.

And before the law went into effect, scores of school districts cooperated with the MEA to extend their teacher contracts for years into the future.

Six years later, the MEA’s active, dues-paying membership has fallen to 78,475, down 31%. That is despite the sales pitches and contract extensions.

Under right-to-work, employees in workplaces organized by a union – including people in most government and school jobs – can no longer be compelled to pay union dues or fees as a condition of employment.

“We don’t know what to expect,” the MEA’s Doug Pratt told the Detroit Free Press when the law was enacted in December 2013. “What we can do is continue to explain to our members why membership is of value. Have we had to increase our efforts on that? Sure we have.”

The MEA just released its own annual report last month, and it confirms what the union officials feared. The report also reveals that the union lost another 6,397 members in the past year. Since right-to-work became law, the MEA has lost 38,790 members. 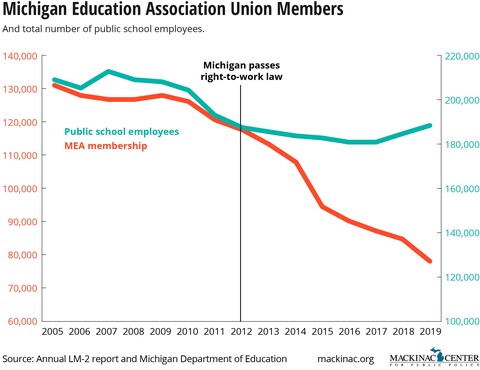