Annual state spending on Michigan roads and other transportation services will hit a record high in the 2018-19 fiscal year at $3.64 billion, and the amount is projected to climb to $3.99 billion by 2021. The increases are in part due to a growing state economy and the resulting tax collections, and also from a tax increase enacted in 2015.

The figures refer to state tax revenues used by the Michigan Department of Transportation to fix roads and pay for other transportation programs, such as subsidies for local bus services.

Annual state transportation funding was substantially lower in 2010-11, just $1.97 billion, or the equivalent of $2.25 billion in current dollars. This means that in eight years, annual state revenues allocated for transportation have increased by $1.39 billion above the rate of inflation.

Some of those extra dollars are the product of increases in the gas and vehicle registration taxes passed in 2015. At the same time, lawmakers earmarked a portion of state income tax revenue to the road budget.

The increase has been persistent, too, with state revenue for transportation higher in each of those eight successive years.

An ongoing debate between politicians in Lansing over how to get more money for road repairs hit a reset yesterday when Gov. Gretchen Whitmer acknowledged that the votes are not there for the 45-cent-per-gallon gas tax increase she had been seeking.

State Rep. Matt Maddock praised Whitmer’s decision to pass a state budget now and put off decisions on finding more resources for road repairs. He called it “very wise,” and said that the Senate and House leaders are still looking for a way to do more to improve Michigan’s roads, preferably with no tax increase.

“In terms of finding more funding for roads, we need to find ways within our budgets we all know exists,” Maddock said. 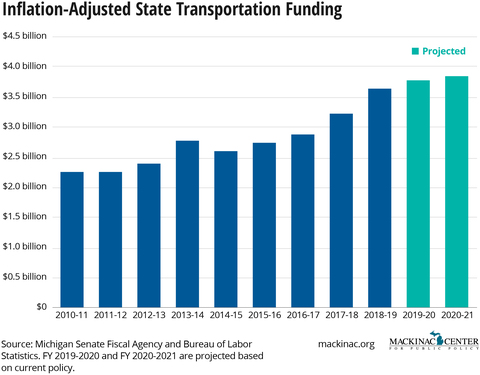