When Michigan legislators voted to accept the Obamacare Medicaid expansion in 2013, it was estimated that between 450,000 and 475,000 able-bodied, childless adults earning less than 138 percent of the federal poverty level would enroll in Medicaid. The actual number turned out to be more than 600,000.

A new report from a Florida-based think tank called the Foundation for Government Accountability says that in Michigan, half the people in the able-bodied Medicaid expansion population do not work at all. Nationwide, census data show that 52 percent do not work, 32 percent work part time or part of the year, and 16 percent work full time.

Michigan’s October unemployment rate of 4.5 percent meant there were 218,000 people looking for work — fewer than the number of able-bodied Medicaid expansion clients who are not working. Total Michigan employment in October was 4,641,000.

Traditionally, Medicaid has provided health care benefits for low-income mothers, children, disabled individuals and the elderly. Many of these individuals also receive or have received regular cash welfare benefits. Under reforms enacted in the 1990s, those benefits have a five-year time limit and require recipients to get a job, sign up for job training, or do least 20 hours a week of volunteer work.

In contrast, today’s able-bodied medical welfare recipients are not subject to any work requirements or limit on how long they can collect benefits. 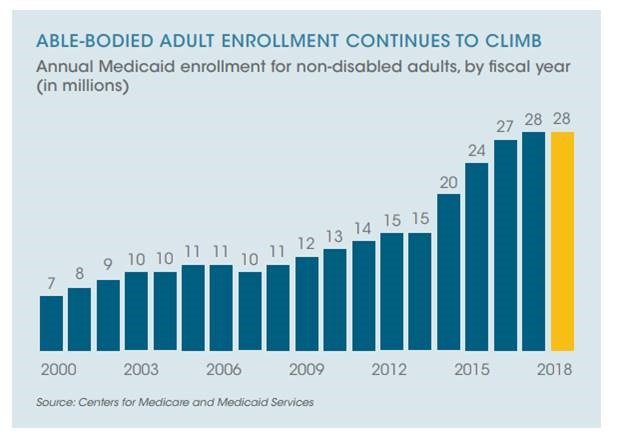 The Florida think tank, which has praised Medicaid reform efforts, warned that Medicaid expansion fosters dependency among the able-bodied and absorbs resources that would otherwise be available to help people who are less able to help themselves.

Here’s how study author Jonathan Ingram describes the problem in this state: “In 2000, Medicaid enrollment in Michigan was 1.35 million. By 2016, it was 2.32 million. That 71 percent increase isn't without implications — it means fewer resources for critical public services and a dependency crisis for able-bodied adults.”

The foundation encourages Michigan and other states to seek permission — “waivers,” in the language of the federal government — from the U.S. Department of Health and Human Services that would allow them to adopt a work requirement for able-bodied Medicaid beneficiaries. At least nine states have already applied for waivers or enacted laws that will require one. They include Arkansas, Arizona, Kansas, Kentucky, Indiana, Maine, New Hampshire, Ohio, and Wisconsin, with others expected to follow.

Cost Of School Pension Underfunding In 2021: 42% Of Teacher Payroll Expense