Since 2008 Michigan legislators have gradually moved away from using taxpayer dollars to subsidize corporations, as these subsidies become politically unpopular among a tide of skepticism from voters.

Select business subsidies have dwindled since the 2000’s with the exception of 2017-18, but despite their growing unpopularity some subsidy programs have still been approved. Using information from the Michigan Votes business subsidy scorecard, here is a list of the top-ten supporters, and opponents, of business subsidies that are currently in office. 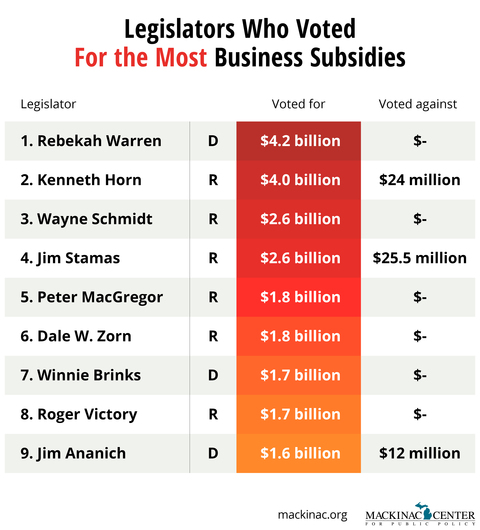 While this list does show which legislators have supported the most subsides over the years, it is important to note that most of the legislators on this list have been in office for ten years or longer. Because of their longer tenure, long-term office holders will tend to move towards the top of the list simply because they have had more subsidies to vote on, and because they took office in an era where subsidy programs were more popular than they are today. 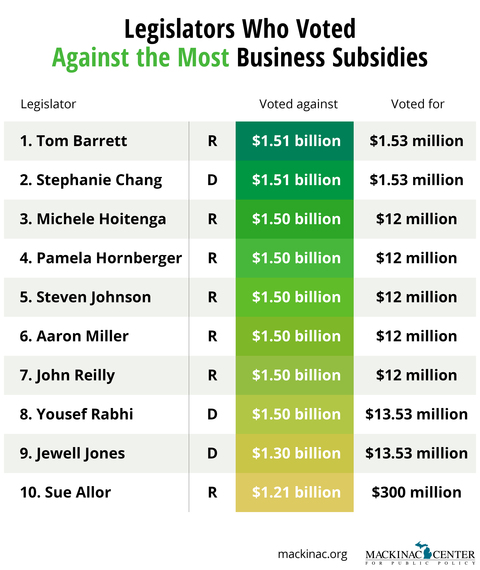 Unlike the legislators among the top-ten subsidy supporters, the top ten legislators for total subsidy dollars opposed are mostly new to the job, most having taken office in 2017 or later. This presence of so many new legislators among the top subsidy opponents clearly shows that business subsidy programs are rapidly becoming forgotten relics of Michigan’s fiscal policy. With the COVID-19 pandemic sparking cries for further government intervention in the economy it is uncertain whether business subsidies will remain on the fringes of acceptable policy for much longer.