The average teacher salary in Michigan's top 10 highest paying districts for 2013 was over $81,000 per year. But there appears to be no correlation between higher paid educators and student outcomes.

The information comes from the latest Bulletin 1014, which was just made available from the Michigan Department of Education. 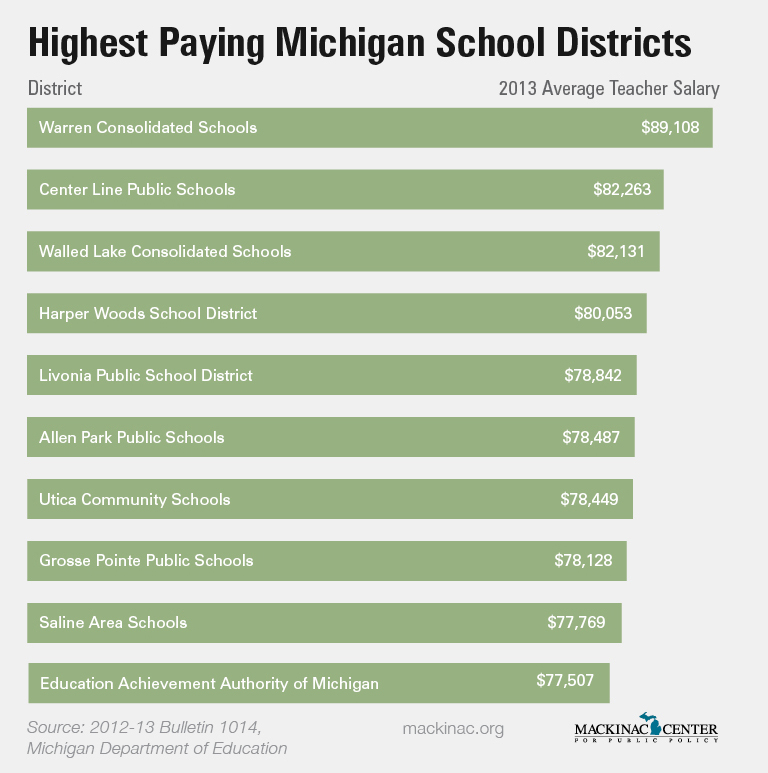 Out of the 540 school districts and charter public schools rated, the rankings were as follows for the state’s highest paying schools:

The Mackinac Center for Public Policy has a similar database which measures by individual schools rather than district-wide.

These results were not surprising to Dan Goldhaber, director of the Center for Education Data & Research and a professor at the University of Washington-Bothell. He has evaluated studies looking at compensation and outcomes.

"[T]his is typical," Goldhaber said. "Research tends to find very little connection between salaries and student achievement, but part of this is because salaries are often measured as average salary, which can be driven either by actual differences in the salary schedule or teacher demographics (where they fall on the schedule). But, moreover, most salary schedules pay teachers based on degree and experience levels, and these are teacher credentials that are only weakly, at best, correlated with student achievement."

*Editor's note: Originally, Westwood Community School District was listed as the number one highest paying district. Further investigation revealed that the Westwood erred in the data it sent to the Michigan Department of Education. When contacted about the discrepency in what the school district reported on its website and what it reported to the state, Brian Jones, financial officer for the district, said the average teacher salary for the Dearborn Heights school district actually is $69,020, which is nearly $20,000 less than what it reported to the state.

Jones said the district mistakenly added the salary of "mentor/experts" (which includes about 80 teachers who work between two to six hours a week in a cyber school program) to the teacher salary data and that inflated the overall average salary for the district.

An MDE spokeswoman said the department sends notices to all school districts notifying them of what will be reported and offers the districts an opportunity to correct inaccurate data before it is published. The Westwood Community School District did not correct its data.